Cupcake and I attended a soirée for a politician wannabe recently. A rude, pushy woman we know got in my face and asked my opinion á-propos  Roe versus Wade. Hoooooo, doggies. I thought for a few seconds and finally came up with what I was sure was not the correct, woke, transparent answer she sought. I said “Rowing is certainly faster assuming you’re talking about the Rio Grande- although global warming has certainly made wading possible judging from watching CBS.” I was rewarded with getting to witness  gin and tonic spilling all over her blouse and a few loud words of disagreement. Turns out she’s a teacher. I plumb disremembered that. 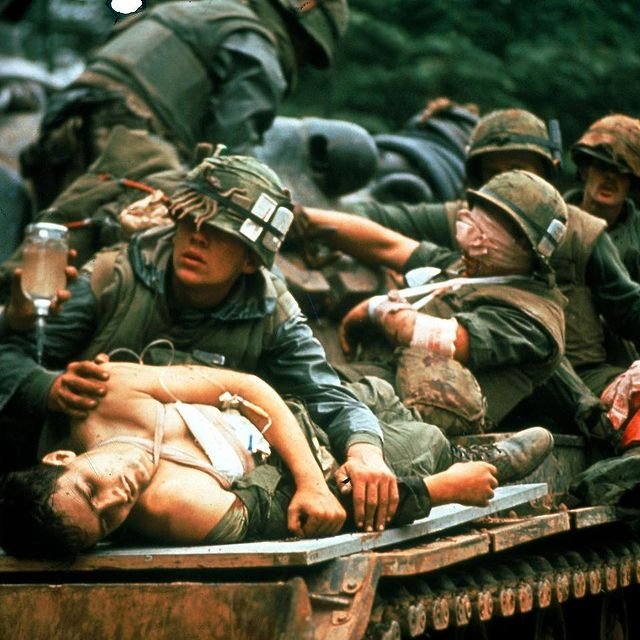 Being diagnosed with an antisocial personality disorder allows one to be opinionated in the New World Disorder without fear of recrimination. I recall a cocktail party back in 1983 at a very high end affair in Medina WA. After having been “outed” as a Vietnam Veteran inadvertently by an acquaintance, a similarly opinionated woman started spraying me with ETOH-laced spittle asking me how I could live with myself after  having killed all those poor women and children.  My rejoinder then was equally appalling- “Well, it’s actually quite simple. Since they can’t run as fast as men, you don’t have to lead them by as much.” Call it what you will, being passive aggressive serves its purpose. In sum, VA folks find me irritating. 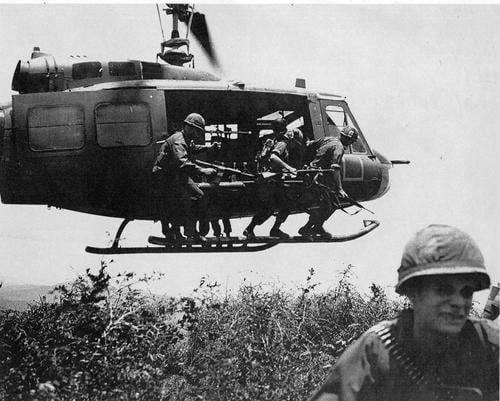 I love to argue and Higher Level of Review (HLR) informal conferences give me a wonderful opportunity to quote real VA law -not made up M 21 drivel. There’s probably nothing more refreshing than demolishing  a poorly crafted denial based on defective legal reasoning. The latest foray is an example. 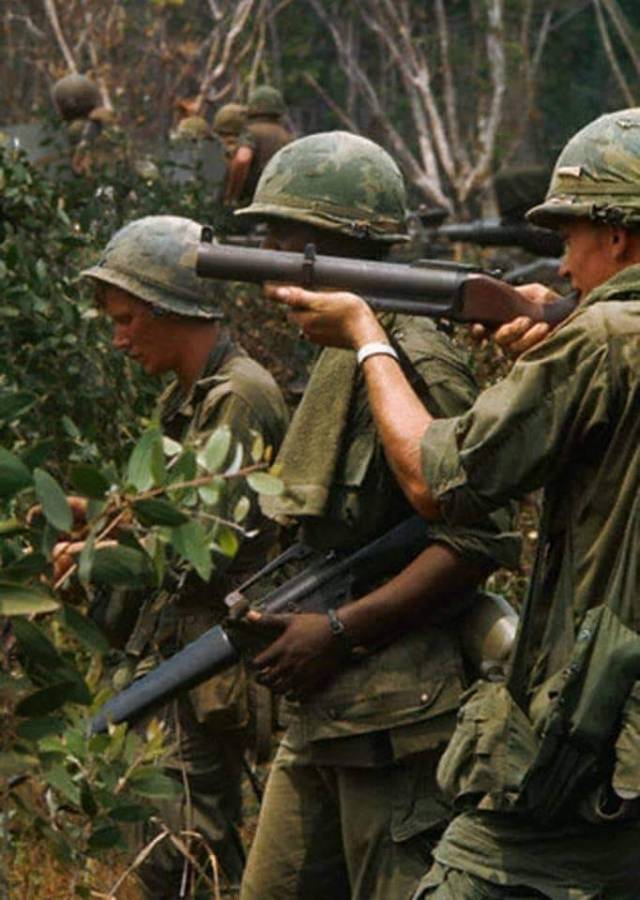 What disturbs me most is that all these rules are there for all to see. How you can misinterpret a regulation like §3.351(c)(3), which specifies that aid and attendance is available based solely on a factual need, but nevertheless in the same breath demand a Veteran have a 100% schedular rating/TDIU or a compendium of Parkinson’s conditions adding up to 100%  before meeting the M 21 super  requirement for aid and attendance?  HLR guardians of the VA fisc love to drag out their pet copy-and-paste phrases like… 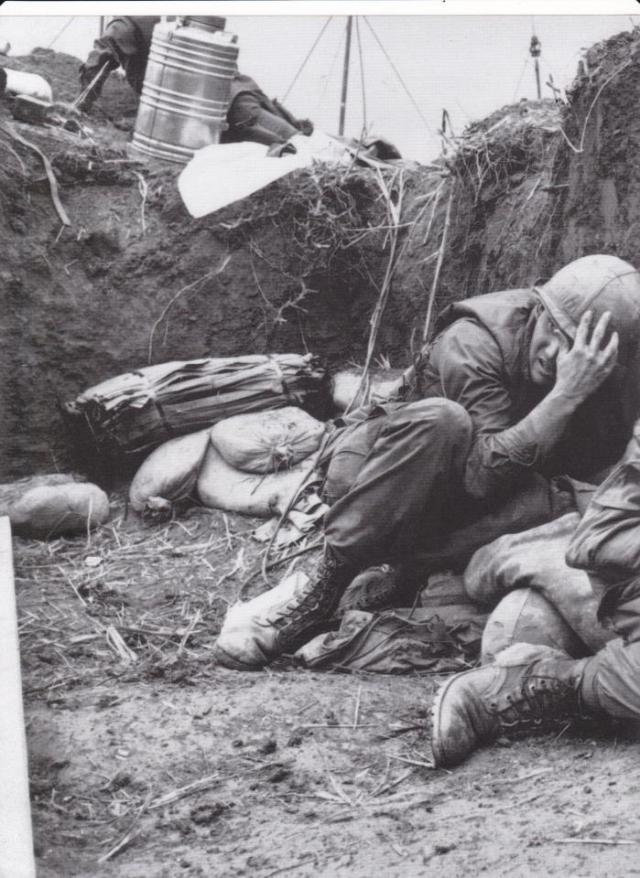 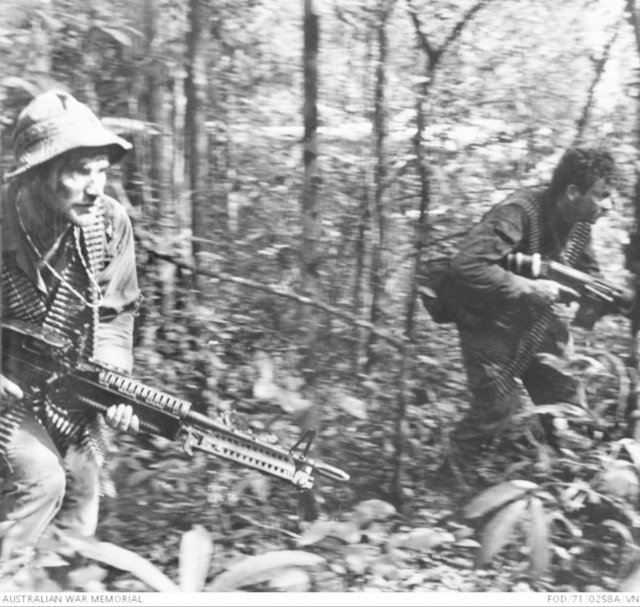 When I interrupt and ask what the supportive authority in CFR or USC is, I get the venerable 1000-yard deer in the headlights stare and a “Huh? Whadyamean? I’m not following you.” Thus, it’s rewarding to have a reviewer actually look up your reference to CFR and say ” Wow, I didn’t know that was in there. When did they add that?” 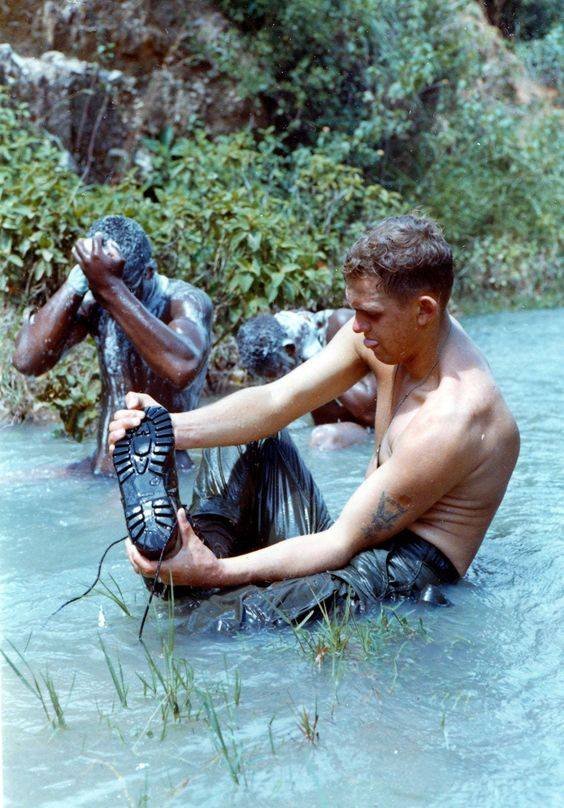 The truth is appalling. VA raters have no clue what they are about. They’re entirely dependent on a computer manual to instruct them on what (or how) they are to accomplish the simplest task. Worse, the manual changes about 135 times a year so it’s out of date in three, two one… Bingo. Why even waste your time printing it up if the next CAVC decision or OGC Precedential opinion will render it incorrect? It’s rumored in VA hallways that it takes three signatures to get clearance to go to the loo. 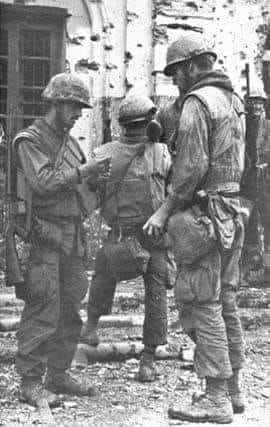 Now, let’s take it up a notch and talk about SMC. Before every HLR informal conference I hold with a reviewer, I ask them point blank if they consider themselves well-versed in the “art” of SMC. I’m not trying to embarrass them ahead of time. Perish the thought. I’m merely trying to gauge their level of knowledge. Considering it confused the bejesus out of me for 4 years, I can only imagine a VA rater’s comprehension skills if all they do is type in the diagnostic code and rely on what they see pop up. Besides, their ignorance becomes all too apparent once you get into the discussion. Most Reviewers are silent and and would have you believe they are there to absorb. Make them commit. Make them comment. Force them by baiting the hook… “Well, the Examiner denied and said it was because ____ but the rules are thus and so… based on §3.352. I didn’t write this. You guys demand Chevron deference so which is it? Does he have to have a total rating or can he simply demonstrate a factual need as the regulation requires? There simply can’t be two correct answers to this question. ” 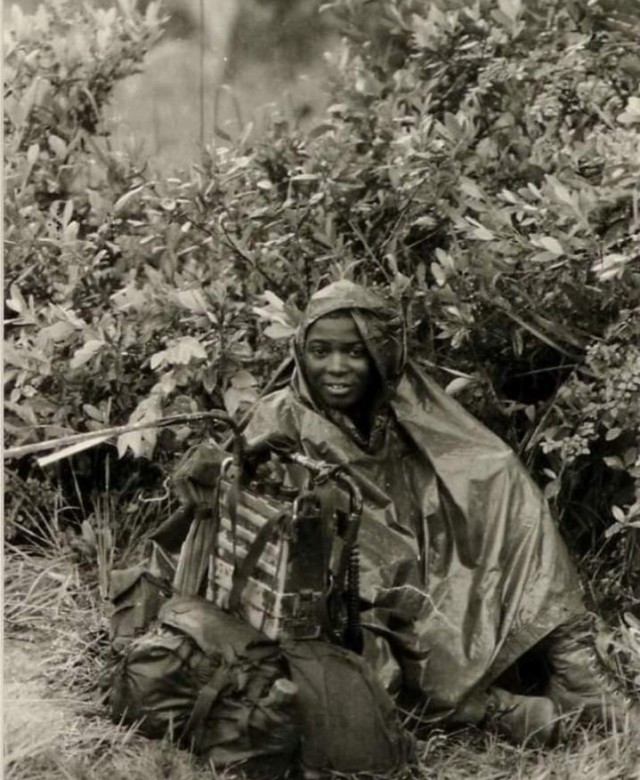 Which brings us to the VA’s fabled “SMC Calculator Computer”. In VBMS, the document type is defined as “Rating Calculator worksheet”-e.g., a product of simple mechanical input.  Below is the attached calculator result on August 10 generated by the rating decision. Now, assuming it’s somehow tied into 38 CFR or 38 USC, the result should be an automatic SMC at the M rate under §3.350(c)(1)(v)-“Blindness in both eyes leaving the veteran so helpless as to be in need of regular aid and attendance.” I mean, they’ve now granted the SMC at the L rate under §3.350(b)(3) for a&a. Because SMC is so convoluted, Akles precedence demands  investigation of ancillary entitlements.  Seems it would just require pushing “print” to get the correct answer. So how could it give you an incorrect lowball of SMC L unless… unless… it’s rigged. 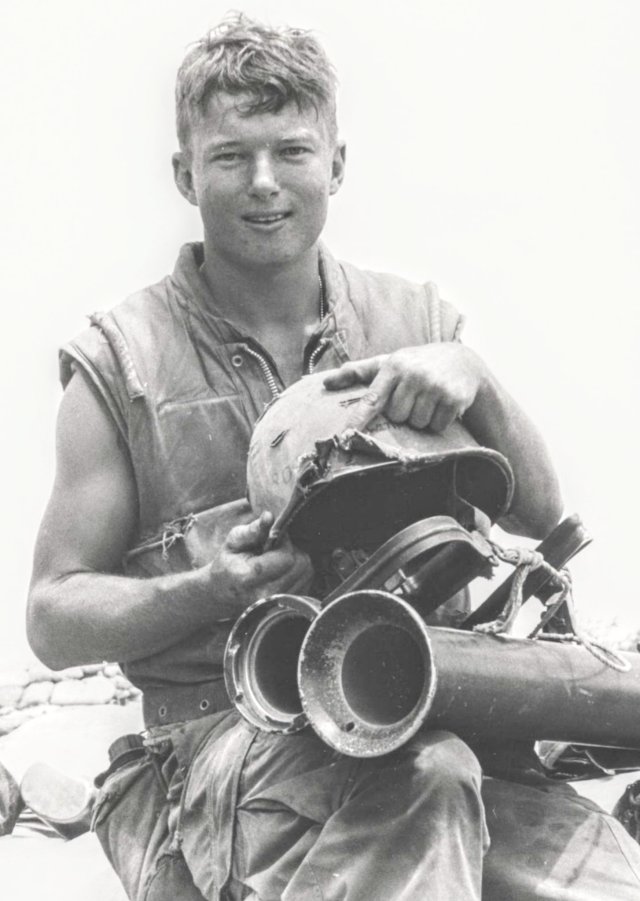 The reason we know this is when Don’s original RD came out granting only 90% with that patented Get Smart Agent 86 phrase “Missed it (a&a for blindness) by that much, Don.”, That same SMC Calculator gave him an automobile allowance of $20,773.00 but no SAH (Specially Adapted Housing) grant for $101,800.00-but it did when I reminded them they forgot it at the first HLR for a&a. This ‘computer’ is nothing more than a fig newton of the imagination. It’s on a par with the one the Wizard of Oz was operating behind the curtain. Fool’s gold. Three-card Monte. Or, I reckon if it really is a VA computer, then it’s to be expected that it’s going to lowball you and have an error rate around 74% as the CAVC observed over a decade ago. Move along folks. This isn’t the droid you’re looking for. 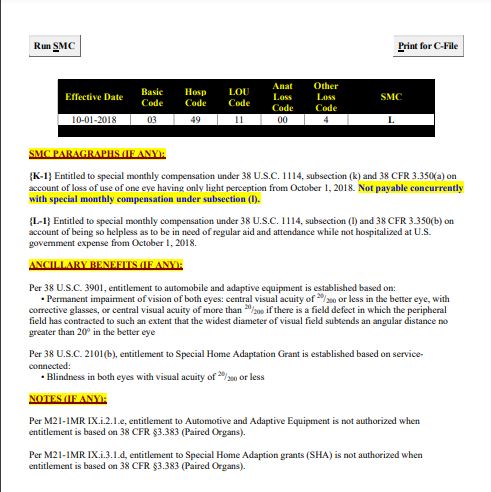 But somehow, the calculator above chose to lowball the Donbo and only granted SMC L. Only after I filed the 996 HLR and accosted the booth lady a second time, did the magic SMC calculator change and disgorge a SMC M. Seems to me it required a subtle nudge by a warm living being’s digits to get it to do that. The question remains why if it’s all automatic. Obviously, there’s nothing automatic about SMC. You get the correct rating using the AMA HLR cattle prod. 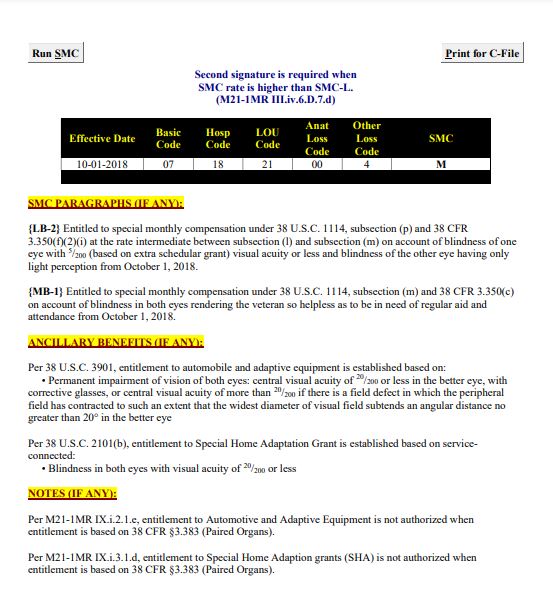 What’s even more amazing is that they went dumpster diving into §3.350(f)(2)(i) and excavated a rating for SMC L 1/2 (LB-2) and attempt to say the Donster is also entitled to it as well. It’s still lower than M so why even go there? Even they must be able to gather it might be pyramiding to offer it. 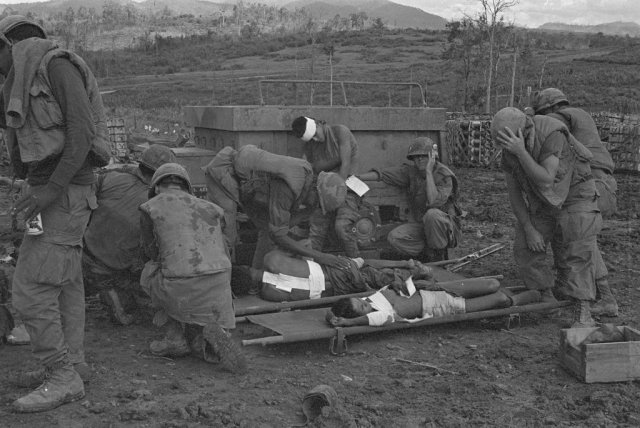 Now, let me say I’m not a misogynist nor do I hold women in low regard (with the possible exception of my ex-wife). Quite the contrary, I was taught to walk on the outside when escorting women to protect them from errant vehicles. I was taught to open doors, allowing them to go first and help  seat them at supper. I’m sure there are about another gazillion rules but I wish to convey that I was raised properly. With all that said, I find it interesting that I’ve had a mess of HLRs and every last one was held by a woman. Whoa. I guess I better back that boat back up to the dock and say that it appeared, based on my auditory input, that the HLR conferences were conducted by folks who had a higher vocal tone that led me to believe they were of the female persuasion. It could be that they weren’t. Could be they metamorphosed. I didn’t check or ask for their pronouns. Most all of them give me their first names only. I have to go into VBMS notes to find out their name rank and airspeed. 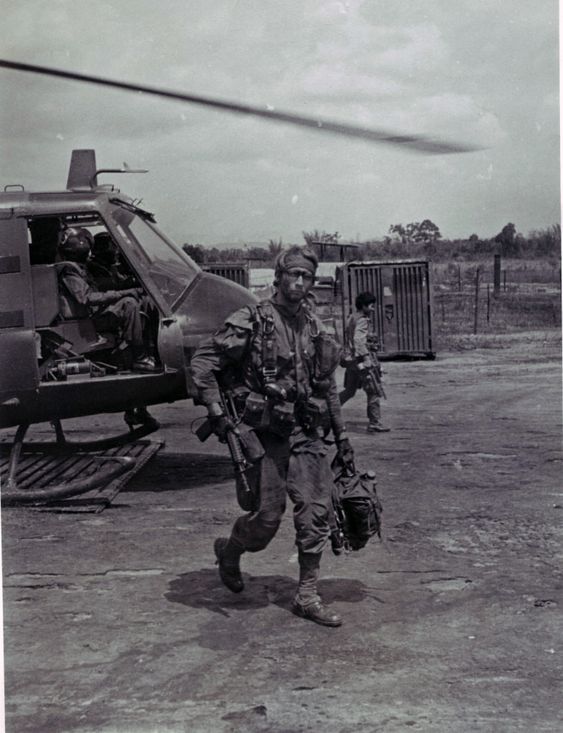 But… wait for it. If you so choose, you can ask to have your pronouns listed with your VA Outlook email address in VBMS. Boy howdy we sure wouldn’t want anyone using the wrong pronouns once they’ve been put on notice. We don’t even want to go there. 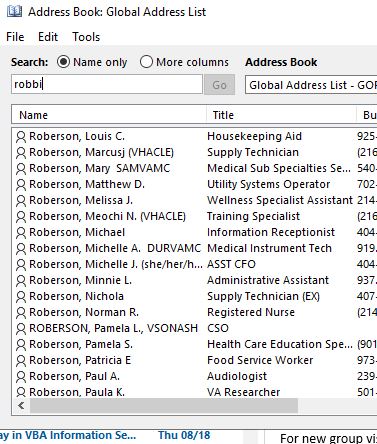 So, without creating further uproar, here’s the latest financial upgrade for the Donmeister to SMC M. It’s temporary as I’ve already filed him for MDD secondary to his blindness. I’m determined to get him to R1 and the way I see it, he needs help taking his meds because a) he can’t see them and b) his depression causes him to forget to take them. Bingo. That’s the factual need for a&a all over again. SMC Lincoln logs, folks. Easy to assemble. We call it VA Poker. Read ’em and weep. 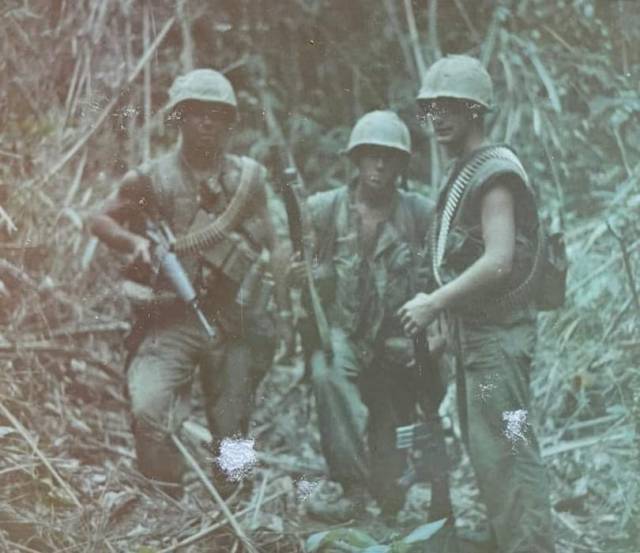 SMC is an art form. You have to think in color rather than rely on black and white. You have to have vision to “see” the entitlement. You have to have never been taught law and be a country bumpkin like me with no JD to even think you can attempt this-let alone hornswoggle them into giving it to your clients. A large dose of antisocial personality helps, too. Remember, back in 1994, VA told me I’d never been in Vietnam and to go engage in flying intercourse at a rolling donut. A Veteran doesn’t forget combat. A Veteran doesn’t forget those he left behind. I don’t get mad anymore. I get even. Hence my Win or  Die™ sentiments about VA claims and appeals. VA law tends to separate the ribbon clerks from the poker players. 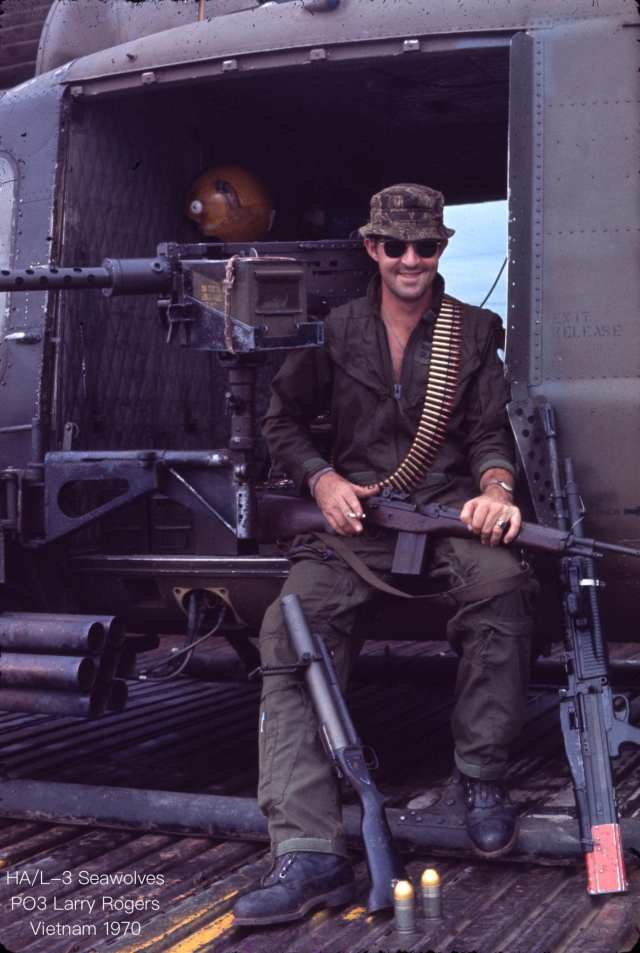 To those of you who litigate for a living, I strongly suggest utilizing the HLR platform more frequently. I know some, if not most of you, feel it’s akin to pissing on a flat rock and getting your shoes wet. Might I suggest filing 996s with no legal brief to illuminate the error you hope to reverse or revise? Keep them in the dark about why it is you object and on what grounds. Don’t even allow them to do their homework and assemble a punch list of M 21 cites to defeat your argument beforehand. I’m batting .1000 using this new ploy. 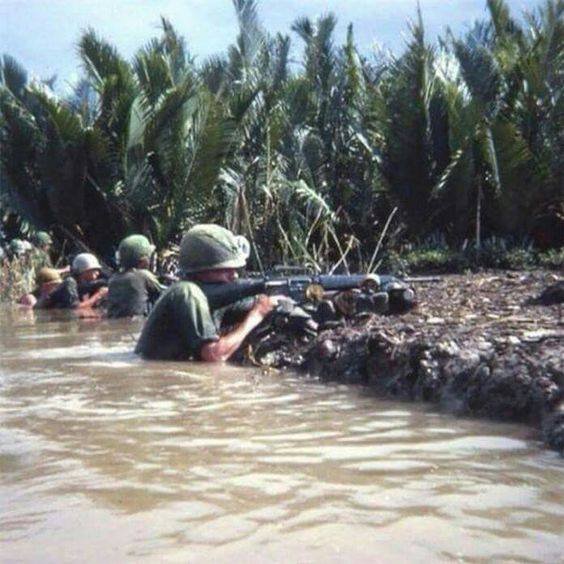 Welcome to the SMC club, Don. It’s a very small club and I aim to increase the membership rolls with many many more of you-the good Lord willing and the creeks don’t rise…