SCHULER KING–A VOICE VETERANS NEED IN THEIR CAUSE

Rarely do you come across a true Advocate for your cause. Veterans find themselves on this slippery slope no matter what surfaces in the news. We discover that a lot of women (and some men, no doubt) got shortchanged on their Major Sexual Trauma (MST) claims by the VA’s much touted National Work Queue (NWQ). The media, instead, go bonkers over the President’s former attorney’s shenanigans or the conviction of his former campaign manager. As Rodney Dangerfield so eloquently said ” We don’t get no respect.” Read on.

An Advocate should be strident. An Advocate should be vociferous and arouse support like a prairie fire in a high wind. You want that Advocate to splash this all over Twitter and beyond… like someone we all know. You don’t want your advocate to pontificate. You want him at a high state of agitation that so perfectly sums up your plight; in a word, such that the invocation he or she paints engenders a veritable firestorm of support.

Well, thank Ed D., one of my clients and an old 11 Bravo LRRP (with a Silver Star, no less) from I Corps (68) for bringing to my attention what might be the perfect candidate to incite support from Patriotic Americans regarding our shoddy treatment at the hands of Congress and the NFL. Ladies and Gentlemen Vets, I give you Schuler King, raconteur extraordinaire. I submit this man might be the perfect panacea for our predicament. Gotta love that onomatopoeia, huh? Relax. It was an accident. I just happened to look up from my hunt-and-punch typing technique and see it. Back to our new spokesman. 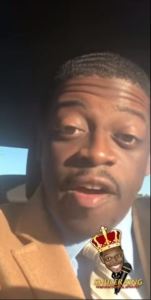 Mr. King, in this clip, eloquently opines on the pros and cons of transporting illegal items through airports but is on point with his ability to create that “ick” factor we associate with giving you them little willies that run up that back of your neck. I submit his invective may be that intangible, integral, innate irritant that will work in our favor. It seems talking about 47 Vets in Phoenix who got hornswoggled into room temperature because VA kept canceling their medical appointments didn’t elicit much of a response. Inasmuch as it didn’t, I propose we try this dude out. I think he could really speak to the recent MST scandal by delving into the NWQ technique whereby every GS-08 VSR is now a quasi-psychologist-with power to deny based on that presumption. Considering Colvin v. Derwinski is established precedence, how this development came to pass is anyone’s guess. Ah, yes. I disremembered the old M 21…

Ladies and Gentlemen Vets, meet a silver-tongued devil that can paint a picture in less than 1000 words… Mr. Schuler King. He’s kinda the X-rated version of Jesse Watters.