Every once in a while you meet a guy who needs some help and you agree to be his huckleberry. He files and loses as we all do or we wouldn’t have sites like this. It’s a right of passage. If you hadn’t lost, Hadit.com would have had it by now. If you had never filed a NOD and bit the bullet, you wouldn’t be asking me about your NOD -asknod.org. Get it? I was going to name this What Would a Veteran Do? WWVD™ just resonates and practically rolls off an old Veteran’s tongue, doesn’t it? Cupcake sure didn’t buy that shit.

Anyway, imagine the luck of the draw.  Meet Steve Vet. He lives a few states south of me. You have Stage 4 (late Hep C and you just got the cure. You’re sporting esophageal varices. Not good. CT says 7/8s fibrosis. Portal gastropathy, cognitive dysfunction, rheumatoid-like arthritic symptomatology. Need I go on? How about them kidneys? I’m blowing about a 1.62 on the creatinizer so I know. Many of my readership live this every day.

Our buddy Vet Steve here is toast. He files for Hep C but the VSO files it as a ‘geographical’ type of claim. Aruuu? Hep C from Udorn RTAFB in Udon- Thani Thailand? Thank you Mr. VFW VSO. He really helped us if you think about it. VA thought they had an easy smackdown on this. But that wasn’t all. He admitted back in 2008 to some White Lady hanky panky involving a shared straw. But not any straw.  He even said this one had what appeared to be dried blood on it. Well, shoo doggies. Anybody with a smite of brains can see VA tying that extra-speshull knot over near the big  tree and leading in a fresh horse. Tie it they did and hanged him. He contacted me with this concoction and threw in as how the STRs were AWOL and he had nothing to show anybody that might mitigate in his favor. He forgot he’s a walking encyclopedia of medical evidence.

That, my friends, is about the lousiest poker hand you can draw. Or is it? By admitting in 2008- long before he ever filed a claim- that he had a drug problem involving toot was like taking a 12 gauge to a wasp’s nest. They came out in droves and circled that statement like it was Delphic Oracle material. Here, unarguably,  was the reason he had hep c. Nobody on earth could disagree with this. Better yet, giving the poor boy heightened attention due to the lack of those STRS from 1970, it was just far more likely than less likely that he got it from failure to yield right-of-way to that nose candy. When he got around to filing for it last year, sure enough out came the damning evidence.

And then he said What’s next? Here I am, Buckwheat. Lead me out of the desert, please. Jez, what can you say to a fellow zoomie who served in the same place you did and suffers the exact same disease? I promised him but I sure didn’t know the minutiae. Of course I volunteered but I sure can’t say as I felt it wasn’t a lost cause until I began to draw up the field of battle. It was a mighty strange bag of facts, but from VA lemons eventually come Veterans’ Vodka lemonade.

Euell Gibbons to the Rescue

Yep. Ol’ Euell was a Groundpounder in the 30’s

If you had cirrhosis and ascites, it means you got the hep about 40-50 years ago depending on if you were burning the candle at both ends. If you broke it in the middle and were burning four ends simultaneously, well,  you’d be pretty near charcoal in half that time. But… if you were a Euell Gibbons Grape Nuts kind of Vet, you might last a wee bit longer like our Stevie Wonder here.

Anyway, Steve filed his claim per my instructions so we could get the drug thing out on the table. This is important. You want the VA to see your claim bet and raise you a 1988 coke blunder. That’s a finding of fact now and it remains so until you dislodge it and set your own reason out there. Right here is where they stepped on their necktie.

We promptly went to our lifelong friend of free Hep C nexus letters and asked him to opine not just on jetguns and shared razors but the 1988 coke accusation as the etiology of his hep C. Right on point. He gave us a glowing IMO- the best I’ve every had from him that poked a big hole in when VA contends the hep began. If he got it from parking Lamborghinis and Porsche’s up his nose, then he could expect to get his cirrhosis and varices by… wait for it…. 2028. Yeppers. Add 40 + years to 1988 and you’d have Steverino’s current liver state ten years from now. Stevie isn’t a big ETOH (Extremely Trashed Or Hammered) kind of  guy. Tying one on in Steve’s parlance is two glasses of wine on a weekend…on succeeding days. Beyond that, he’s a Trail Mix guy who likes nuts and Wheat Chex. Sometimes he goes off the reservation and has some Whey flakes in heavy unpasteurized creme! 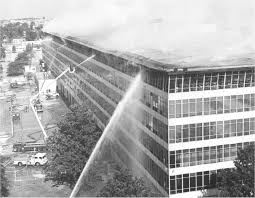 So, no STRs… What to do? Well, first of all, since Hep C wasn’t identified until 1989, you sure aren’t going to find anything pro or con about getting hep c in the contemporary STRs. This takes a great burden of proof off the claim. We all had the jetgun/shared razor/ wild and crazy sex risks back then so these are basically documented contemporary KNOWN risk factors. Toss in we’re 66% more likely than not to have it if we’re Southeast Asia (SEA) theater Vets and the odds go up some more. So now you’ve erased what most would call a huge deficit for corroboration of the claims pro or con.

But best of all, when you play VA poker, sometimes VA just gets too eager and jumps the  gun prematurely.  They are so sure they have the Big Chicken Dinner Winner  you cannot beat. Snorted coke? You’re toast, dude. Shoot, we can have this typed up and in the mail next week . Fully Developed Claim to the rescue! Or not. If your nose was clean in service- and his was as evidenced by his military records they did manage to find- then the benefit of the doubt has to tilt towards him. Throw in a set of square medical facts that only fit into a square hole and, with a killer nexus letter, you’re in high cotton.

VA now has one and only one medically shaky nexus and they have to stick with it. They saw the initial 1988 coke bet and raised. Stevie just saw their raise and called. Stevie has a pair of aces to the VA’s pair of Queens showing. This is not to say VA might not run out and buy an Independent Medical Evaluation (IME) at the BVA or beg the original rater to “redo the coke nexus somehow. But they cannot. They poured concrete around the cocaine straw as the sole risk factor and unless they can prove they committed cocaine CUE and retract it, it remains the coke’s fault. Remember, VA has declared the coke straw as the culprit… in 1988. That is now a finding of fact aka a binding decision. They have to stick with that story. Steve sucked them in. It’s a classic tar baby attack. I’ve used it. Inveigle the VA Examiner into glomming onto the too-obvious coke risk. You can’t hide it so use it. Remember what Muhammad Ali once called rope-a-dope? Make her look like she got her RN out of a mail order catalog. Then you present your direct connection to service with IMO and rebut this presumptive coke risk nonsense.  The claim is now more than in equipoise and §3.102 is for application.

Check out this argument. I’d say the old Stevemeister is headed towards Bucks Boulevard or Dollar Drive. Sometimes you win these things by going backwards before you even get started. Click on it to make it larger. 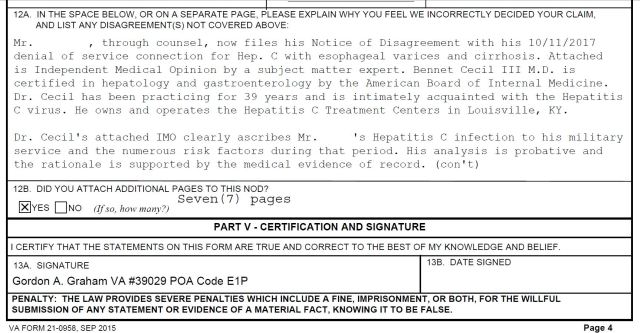 And the extra 7 pages…

See. It always goes to show. Tell the truth from the git go and let it take you where it will.  So easy us  cavemen with no juris doctorates can stumble through it.