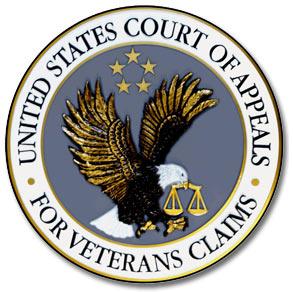 I apologize to my readership for being AWOL. I do have a pass from Teacher. Teacher being the VA. After a summer spent trying to inveigle the VA into completing his claims, Butch took matters into his own hands and decided to kite off a letter to the CAVC in a vain attempt to speed up the process. Face it, if you’ve spent two and a half years waiting for a C&P exam for your Ischemic Heart Disease, had your leg amputated above the knee and VA is insisting you need to “refile” the claim because it was denied in 2015 but they plumb forgot to tell you about it, it’s probably high time to consider an Ex Writ.

One thing about an Extraordinary Writ of Mandamus is that it grabs the VA by the short hairs at your local VA. Butch’s love letter to the Court sure had a pretty dramatic result as well. Let me explain how this works in DickandJanespeak. VA goes from 0 to 60 in slightly under 4 seconds. That doesn’t mean they’ll get it right though, And in some cases, there is clear bias and yes, dare I say, adversarial retribution for having the gall not to discuss it with the local yokels beforehand or giving them the opportunity to shuck and jive you for another year or two.

As advocates, we are taught to advance in measured paces toward an Ex Writ. The Lexis Nexis Veterans Benefits Manual (VBM), our “Bible” on how to litigate, advises us to write a letter begging- begging, mind you- the RO bozos to get their defecation in an orderly pile and do us the favor of producing that which is overdue. If, after a month or two, it fails to jar them into some semblance of obeying our wishes, we are instructed to try, try again. A third (or fourth)entreaty after another polite 30-90 days is advised with the Ex Writ “carrot on the stick” now unveiled from out of the advocate’s bag of tricks as a threat. But just a threat, mind you. The object is to avoid being an asshat and politely try to convince them that your patience will be reaching its end in a year or two.

After this six to nine month “dance”, it is deemed permissible to finally send them the 30-day letter with the pin removed from the hand grenade and the promise that it will be tossed sans bail if no action is forthcoming. I don’t cotton to that technique. If VA knows they can blow smoke up the Advocate’s ass for six to seven months with no repercussions, it’s a good bet they’ll just delay  anyway to see what you’re made of.  I prefer the “Surprise, Surprise, Surprise, Sgt. Carter” method.  I call my technique Ex Parte Fait Accompli. There’s just nothing that says F*ck You like answering the VARO front door on Monday morning and finding that Ex Writ hand grenade on the doorstep with no bail. In Butch’s case, it’s 47 years overdue. Don’t forget they handed him a hat full of 0% ratings for his SFWs back in 1970.

I  discovered my readership had increased the last time I filed an Ex Writ. I had VA correspondence completing a few bitches in my mailbox before I even got my docket number back from the CAVC the last time. Obviously, the Seattle RO has assigned a “minder” to me and they caught it coming out of the chute. The standard practice in Ex Writs is a) you bitch to the Court; b)the Court gives the VA 30 days to report back to them and explain why Mr. Asknod is so upset; and c) in that thirty days, the shit contacts the rotary oscillator with gusto. Everything is “fixed” after a fashion and the VA reports back that they cannot, for the life of them, figure out what in Sam Hill that demented jackwad in Seattle is complaining about because they already did it (last week). They aren’t  apologetic about the fact that they finished it thirty minutes before they submitted their response to the Court. Jez, they don’t even blush or apologize. I don’t reckon I could pull that off without a big, shit-eatin’ grin from ear to ear.

In Butch’s  case, the repair order for this Ex Writ was a resounding bitchslap. Butch filed the Writ September 15th or so. The Court sent out the “whazzup?” 30-day letter on September 28th. VA denied the IHD on October 12th. Coincidence, you say? They declared it wasn’t on the list of presumptives for AO. I kid you not. They purposefully came up with some bogus diagnosis on his heart and ignored all the evidence we submitted clearly diagnosing it as atherosclerosis and ischemia. Butch even let them know his new moniker was  “Hopalong Long”. The problem with this type of 78 RPM justice is they  freely admitted they were in constructive possession of the evidence of the coronary artery disease. This wasn’t the run-of-the-mill “Wow, sorry Butch. We didn’t dial on that dx of CAD. We’ve been holding that in the evidence locker since March 2015 but somehow we disremembered the amputation. We’ll be getting back to you real soon, hear? And don’t forget to mail in another NOD on it so we can begin your substantive appeal in 2018.”

These folks seem to forget what they’ve already said and done. When we went in for the DRO hearing in February this year, the DRO politely refused to discuss the IHD on appeal saying she couldn’t adjudicate a decision on a claim that had not been decided up or down yet. Three months later she was telling us we had to refile for it if we wanted VA to adjudicate it in this lifetime.  Can’t you just see Tim Allen saying “Aruuuu?” about now?

This explains my silence on the subject around here as well. I’m not admitted to practice at the CAVC yet so I walk softly and carry a big stick.  After he had filed pro se, I agreed to help Butch “revise and extend” his remarks on how VA has been treating him in more polished English. A day after I sent in an explanation of the 2.5 year delay, the October 12th denial showed up. To say I was flabbergasted is a masterpiece of understatement. I figured, at a bare minimum,  a 100% SMC M was going to be in the envelope. Hence my analogy to Groundhog Day (the movie). I should not have expected anything less than a denial. Doing VA claims is a classic study of repetitive error. They’re condemned to getting it wrong every time. But is it contrived error or simply innocent stupidity?

VA can do many things to us and get away with it. They have since the War of 1812 and I don’t see it changing any time soon. What they cannot do is act in a vindictive, adversarial manner. Now granted, Butch didn’t exactly played the Ex Writ game according to Hoyle in VA’s eyes. I admit he didn’t go through the hoopla of three or four 30-days letters with dire warnings that baaaaaaaad things were going to happen if they didn’t play nice.  He did what Veterans always do. He waited patiently for two and half years.  In CAVCland, they give you two years to git’rdone. After that, it’s considered “an arbitrary refusal to act”. And if VA comes back and tell you to refile a claim that has not been decided in the first instance, why,  that’s out and out error. A claim remains pending until there is some evidence a Veteran can see and understand something-preferably written- that would convince him the claim was dead, done and denied. It sure doesn’t require having to keep sending in requests begging for finality. But boy howdy if you kite off a letter to the Court begging them to fix it and VA comes back with a bogus denial like a quickie divorce in Reno, the Court views that as “adversarial” and not very “veteran friendly”. VA can punish us in a lot of different ways and they frequently do. They just can’t do it while the Court is watching. That’s a Bozo no-no at all our 56 VAROs across the fruited plain. Why, the Court might get the impression that the VA is mean-spirited and anti-Vet. Perish the thought, mon ami.

They say a picture is worth a thousand words. Hopalong Butch sent the Court this picture of his brand new Agent Orange present along with the Ex Writ. I wonder how the VA is going to to look  CAVC Judge Michael Allen straight in the face and say “Reasonable minds can agree that a diagnosis of cardiac diastolic dysfunction with mild left ventricular hypertrophy does not, in and of itself, occasion the amputation of a lower extremity above the knee, your honor. Personally, we think he’s bullshitting us. We sure hope you don’t fall for it, too.” 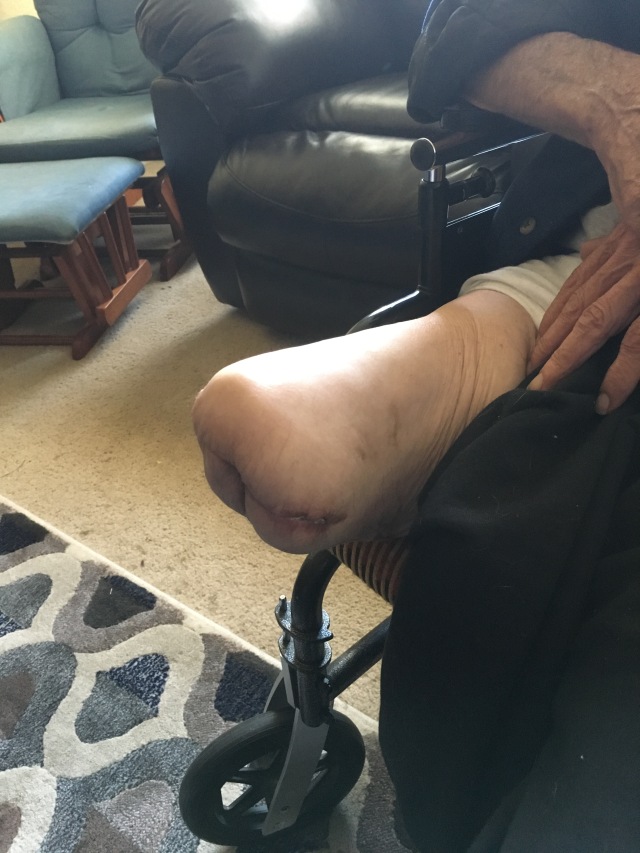 I expect that had Butch allowed me to give the readership a blow-by-blow description of this Ex Writ in a blog writeup a month ago, VA would have quickly counterpunched with gusto and headed us off at the pass. The last thing I figured was they’d screw this up and deny it. That’s why we waited and allowed them to clothesline themselves. That’s also why this Groundhog Day analogy is so à propos. A leopard simply cannot change his spots. This is vintage VA denial and par for the course.  My guess is they’ll claim it was accidentally dumped  into the National Work Queue and some FNG gomer GS-7 in Togus or Sioux Falls cranked out a denial 30 minutes before lunch hour on the 12th.  Ooops. Wrong End Product. Too bad (s)he didn’t actually read the evidence of record. You can’t just undo a denial.VA has to CUE themselves.

VA has some taaaaaaaaaaaall talking to do and their Respondent’s response is due on October 26th or they turn into a pumpkin and mice. For you numerically challenged VA minders, that works out to next Friday night by 2359 hrs EDT. Stay tuned here for the next update. I’m sure it’s going to be a daisy. Same Vet time. Same Vet channel.