Once upon a time in the Land of nod (September 27th, 2011), on the second day of my new website, I published a CAVC decision about one Malcolm H. Melancon. It was the beginning of a long story much like my five-year odyssey with Butch Long.

Along about my birthday on April Fools in 2013, who should show up? Why none other than Malcolm in the Middle. He even introduced himself as the same. By September, we were like peas and carrots. It’s amazing to me, frankly, seeing who shows up here sometimes following my ramblings. Cupcake  isn’t a major fan of asknod after that little têt-à-têt with Wounded Wallet Project a piece back. She now just shakes her head and mumbles Tourette’s but I’d like to think I’m part idiot savant, too. And besides, being politically incorrect is such a nebulous concept these days. Who’s to say? Look at the White House.

Malcolm and I tried, via appeals with a very good attorney but it was ineffectual. I’ve always held, for the last six years, that the error in 1991 had to be resolved via a CUE claim (or a Motion to Revise in VAspeak) first before trying to unravel this fustercluck. No one wanted to take it on and quite frankly, even though Malcolm had stumbled all the way to the Fed. Circus pro se, this needed a keen legal mind to dissect the claims file looking for that smoking gun of error. I never thought it would land on my desk.

It didn’t pan out with St. Mary as you can see.

In VA law , and probably US law in general, as far as I know- which isn’t much- we have what is called the standard of review. In DickandJanespeak, it translates into if A=B, then C happens. In anal legal terms, it means a statute and its counterpart at Agency (VA) level requires X conditions exist as evidence of record, and, if met, all resultant entitlements that can be awarded legally, will be. However, if the pertinent statute or regulation  was ignored and some arbitrary new set of metrics were used to adjudge it which were unsupported by statute and regulation, that would be the wrong standard of review. Here, it occurred in a medical conclusion back in 1991. Mr. M-in-the-M failed to object within a year. Undoubtedly his DAV rep. encouraged him to take the two 0% ratings and beat feet. I had one do it to me in 1992.

Here’s the document that began this whole shenanigan. Malcolm has given me permission, in writing, to do this so as to not endanger my VA accreditation. Before achieving Agent status, I could discuss these things at length. With accreditation, absent that written permission, I would be endangering his privacy and God only knows what other sins. Most of what I draw on is in the public domain at the CAVC or the BVA. Some documents, as I illustrate here, are from Malcolm’s claims files and are suitably redacted to protect his  private info. This is a contemporaneous 1991 standard Combined Rating Decision from which his award was promulgated. Highlighted in yellow is the hepatitis decision and the reason. Herein lies an incorrect standard of review. 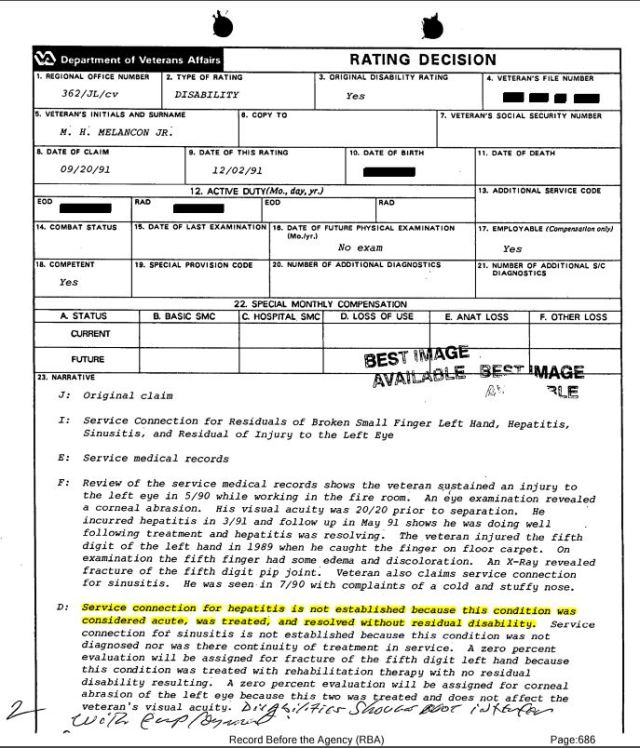 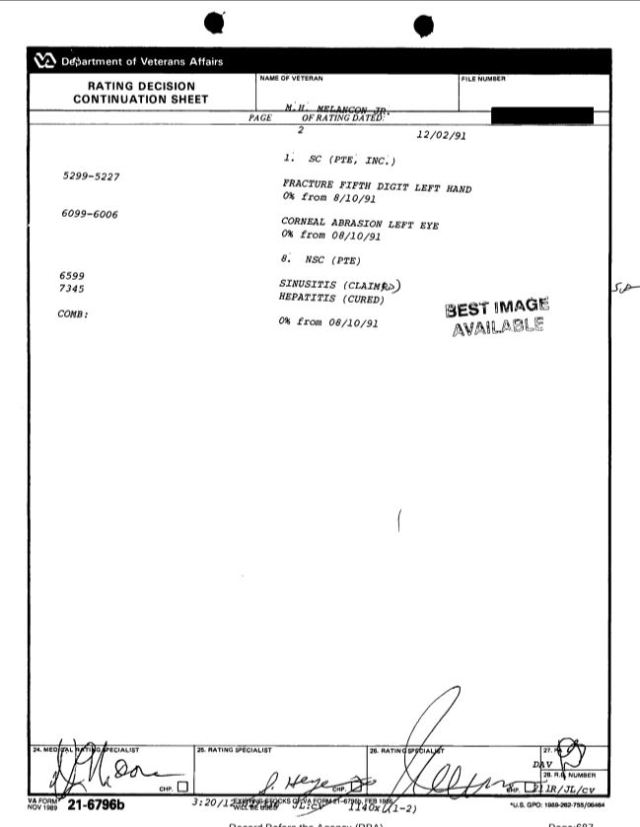 The  rater was partially right. The Hepatitis B was acute and was gradually resolving-but it would take several years. Unfortunately, the Hepatitis C was not acute and severely disabled Mr. Melancon over the next decade. And here is the glaring standard of review error staring us right in the face. Diagnostic code (DC) 7345 (1991) clearly and unequivocally grants service connection for infectious hepatitis at the 0% compensation rate  for Healed; nonsymptomatic. Page 2 above boldly declares DC 7345 Hepatitis (cured) aka resolved, aka nonsymptomatic. I feel like donating my Roget’s Thesaurus to the Houston raters.

The standard of review is not that it was “acute and resolved”, but that it occurred in the line of duty, on active duty while in the service of his country, no willful misconduct was involved and that he had a discharge under honorable conditions.

After you have arrived at this juncture, the next standard of review is to refer to the pertinent regulation in 38  CFR §4.114 Diagnistic Code 7345 and discern which rating he would be entitled to… and lo, there is one that fits him to a ‘T’. His symptoms are healed and non symptomatic (aka acute and resolved) ergo the obvious choice is 0%.

38 CFRs §§ 3.1(l), 3.4(b)(1) and 3.303(a) are the proper standard of review. If the disease was acute and resolved, that would be the second step of review in determining what ratings percentage was due. Obviously the hepatitis B is service connected because the preponderance of the evidence says so. That is not in dispute. His DD 214 shows an honorable discharge. He filed within a year of separation. Bingo. Service connected. Healed and asymptomatic? Cha-ching! $0.00 dollars per month but you get free gastrointestinal medical visits for life at the VAMC nearest you.

As a side note here, Malcolm also was granted two other 0% ratings which were identical which requires a 10% rating under §3.324! Gee, two CUEs for the price of one.

What is a screaming hoot is what has transpired in the interim since 1991. Remember, old Malcolm was not Clarence Darrow and was not expected to be. What he is, however,  is doggedly determined and undeterred by “What part of ‘No!’ don’t you understand?” VA has conceded over the last two decades or so that:

a) Yessssssssssssssss, indeedy.  Mr.Malcolm had Hep B in 1991 (acute and resolved, mind you) but he failed to appeal. Too late. No one at the Houston VARO or the DAV said “Pssst. File a CUE claim, young man”.

b) Well, not exactly. Actually, he never had Hepatitis B and all those tests were false positives over the years. He actually had Hepatitis C from tattoos and unprotected sex and thus was service connected but -yep- at 0%. Funny this one isn’t acute and resolved as well.

c) Well, we’d allow as maybe he had both but there’s no proof of that because the Hepatitis C test in 1991 said negative. (Unfortunately, there was no Hepatitis C test available at Balboa in 1991 and probably wouldn’t be for several years to come). Hell, even the Red Cross didn’t have  the test available for protection of the blood supply nationally until 1992-and they were the first to get it.

d) a VA RN opined in 2004 that as time moves on, we lose those little Hepatitis B dumoflotchies in our blood and it makes it look like we’ve never had it-ever- so it really isn’t remarkable. Malcolm used to show HBV markers but now he doesn’t. Move along, folks. Nothing to see here. Amazing the medical manure that emanates from the mouths of VA Examiners who let their mouths overload their asses.

Just for shits and grins, I had him tested for HB Surface Ab and HC Core Ab in 2015. Both came back positive showing exposure or resolved Hep. B. Maybe those VA blood testing components on 2004 were expired. Watch Carmen Mascarenhas, MD moonwalk right over this HBV enigma. 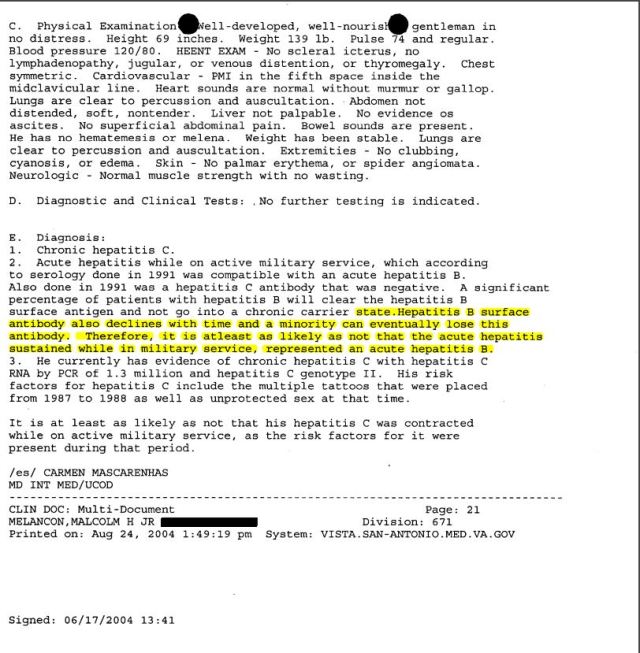 Well, actually Carmen, you never lose the surface antibody. You have that one confused with the surface antigen. Time to fly back down to the University of Grenada for an MD refresher course in gastroenterology.

Or- this is where you earn your money doing this forensic research- you notice a lab test that says  henceforth after 5/19/2004, all Hep B testing will include the antibodies test and not just the testing for ACTIVE Hep b (HB Sag HB SAB). The problem is that the specimen was collected on 02/02/2004– three months plus before the new test came on line. Et Voilà!  No hep. B!  Malcolm got lucky on this one. He got a copy of his c-file way back when with this “work copy only” in it. The recent 2013 one is MIA. But I get it. It was just a work copy and not a permanent, incriminating record. I guess that means VA isn’t required to “keep it”. 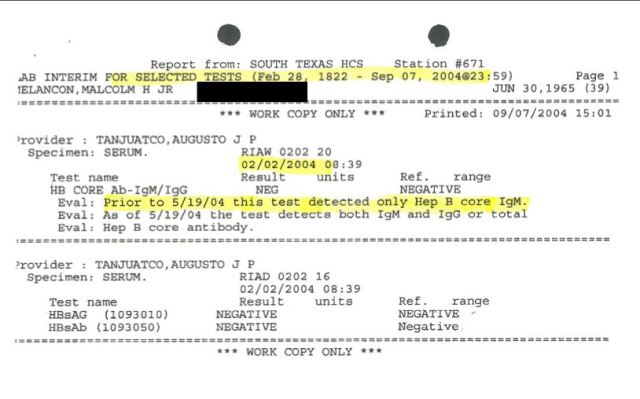 So, we have the hepatitis B that wasn’t service connected in 1991 still isn’t. However, the evidence has gradually evaporated into thin air anyway and there really is no proof now one way or the other. But there is proof of Hep C and he had tattoos so it’s SC but it’s only SC for 0%.  But the HCV test in 91 was negative. But the Hep B in 1991 during active service aboard the USS Reasoner out on the Bounding Main of the Pacific Ocean wasn’t SC because -and I get lost here-why? Two different hepatitis viruses (virae?) with two different Diagnostic Codes, both of which provide for healed, asymptomatic disease at 0%, and he is now SC for HCV in 2004 but not to HBV in 1991 but freely acknowledged in 2004 as being contracted in service. Is it just me or is this a speshul kind of VA stupid? Do these people even read the file or make it up as they go? 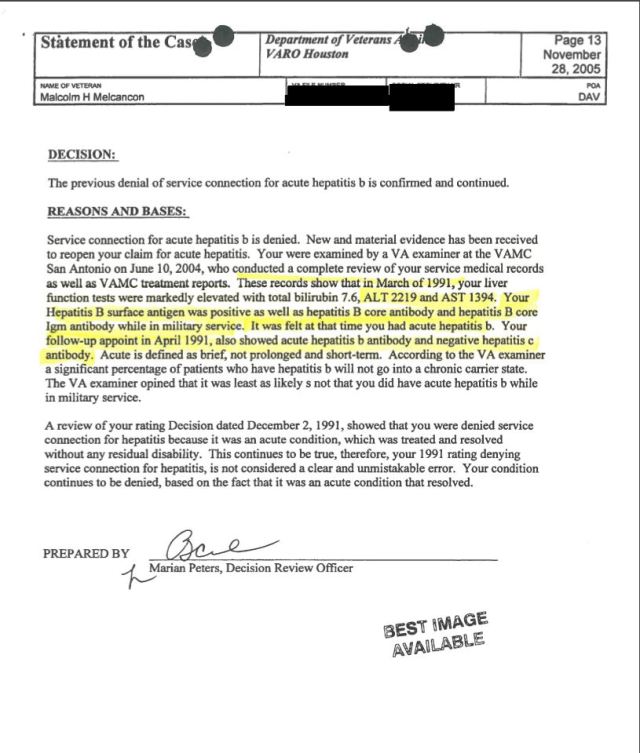 But wait. We’re not going to see your Hep B and raise you to 0% for Hep C and call. 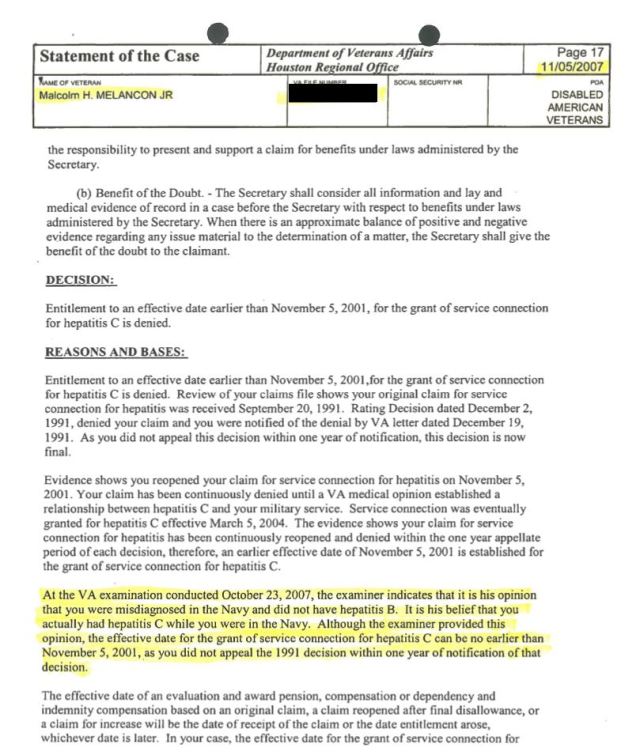 So, what’s a poor ex-squid in the middle supposed to do? Why, wait four years for his friend to get his accreditation and ask for representation. What else? Herewith, we dropped this conundrum on Houston. I think they have a problem.

All these years it was denied based on the wrong standard of review. The error continued all the way up to the CAVC and even Saint Mary Schoelen’s staff attorneys missed it. Veterans Law Judge Keith Allen missed it. Everyone missed it until I thought to myself last week “Shit. Look at all the guys who got (and still get) the double ought of 0% for hearing loss and 0% for tinnitus ( or hemorrhoids, or flat feet or hammertoe or…). I looked through our current VA Schedule of Rating Disabilities (2017) and found 156 instances of 0% ratings from head to toe inside and out. If that isn’t enough. 38 CFR §4.31 allows you to fashion one out of whole cloth for any Diagnostic Code.

Here is Mr. Melancon’s new pièce de résistance  through counsel. I have lived, breathed and slept Malcolm’s claims file for five years and it never bit me on the ass about the “acute and resolved” being the wrong standard of review. I’m pretty dense, huh?

The NOVA lawdogs agree. It’s going to go off at 6-1 odds at the VBAHOUS 362, 2-1 at the BVA  and 5/9 at the CAVC. I’d hate to see it go to the Court but as I said, this one is a speshul kind of stupid even I have rarely seen. I guess I’ll be having to apply for privileges at the CAVC if it goes up there. I can recite this in my sleep now but you just know it would sound sweet with Ken Carpenter doing the oral presentation or the Rule 33 meeting.

And after all these years, Cupcake and I finally had the most excellent pleasure of meeting Malcolm in San Antonio this April at Spring NOVA. Welcome Home, Malcolm. 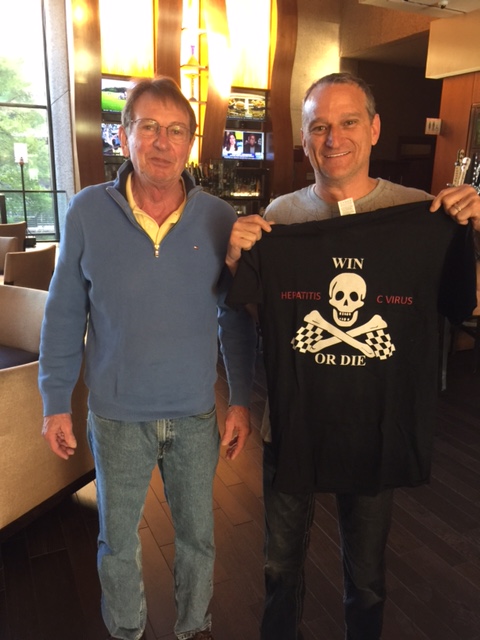 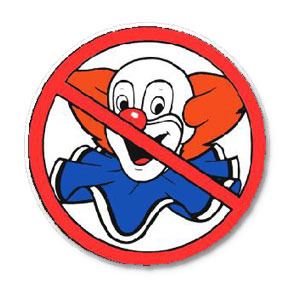