VSOs–LET’S SEND IN A “REQUEST FOR RECONSIDERATION” 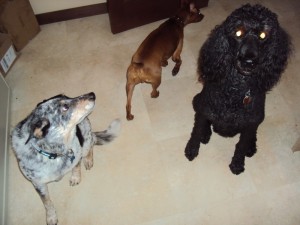 Have your dogs ever approached you en masse and demanded to go somewhere? Outside? For a ride in the car? Mine do. They don’t actually swarm like the crows in Al Hitchcock’s Birds. It’s far less organized, boisterous and simultaneously not as as well-choreographed as it could be. Dogs run into each other, me and the furniture. Eventually everyone is headed in the right direction. One of my favorites when these joie de vivre moments happen is “Go forarideinthecar  huh?” 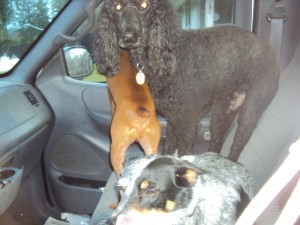 We all go out and pile in. I cut on the engine and we sit there for about 5 minutes and don’t go anywhere. Shooodoggies. They’re in high cotton. I turn on the rock and roll station and get glimmers of ideas on something to write about. The dogs all stare out the windows of the F-150 like we’re traveling Mach 2.3. The scenery almost never changes but they don’t notice. It should also remind you a lot of what happens when your VSO service rep meets with you after your Fully Developed Denial arrives in the BBE and says “Wanna fileforareconsideration, huh?” That’s right. Go sit in a car for a year (in park).

I have seen this subject discussed from the north end of the Left Coast to The Land That Water Forgot down south. I have heard Veterans in Whacko Texas discuss their recent Motion for Reconsideration filings (online) at the Dave Koresh Memorial Regional Office downtown.

Seems like if VA has a form for everything nigh on to a 21-Homeless Declaration (coming soon), they’d have published one for this purpose. If everyone’s filing for it, what are they using? The ages-old 21-4138? Get the form out of here. I have an ugly secret to let out.

The BVA Motion for Reconsideration

There is a Motion for Reconsideration. It is not a form so much as the standard 8 1/2 inch by 11 inch white computer paper addressed to  BVA with your particulars on it requesting a rehearing, preferably by a Board of Three Veterans Law Judges as opposed to the original one, contesting your recent denial before said Veterans Law Judge aforementioned. You have 120 sunrises and sunsets to accomplish this project. It equitably tolls any Notice of Appeal (NOA) to the Court of Appeals for Veterans Claims (CAVC) until such time as the High Poobah Laura Eskinazi rules on whether she will or will not grant the Motion. If denied, the Veteran Appellant has an addition 120 sunrises and sunsets to successfully send in a NOA to the CAVC to appeal. The pertinent CFR is §20.1000.

Reconsideration of an appellate decision may be accorded at any time by the Board of Veterans’ Appeals on motion by the appellant or his or her representative or on the Board’s own motion:

(a) Upon allegation of obvious error of fact or law;

(b) Upon discovery of new and material evidence in the form of relevant records or reports of the service department concerned; or

(c) Upon allegation that an allowance of benefits by the Board has been materially influenced by false or fraudulent evidence submitted by or on behalf of the appellant.

However, there is no such thing at the local Fort Fumble, kids. You file nowadays in one way or another. It can be electronically or via a VSO. It could be pro se directly to Cheeseville Wisconsin with green card or a fax. It can be on a CD, a Thumb drive or on a 21-526EZ in typed format. If you slowed down to the speed of light and filed using the Fully Developed Claim (FDC) format, you can get some quick action. If there’s a monkey wrench in there, expect the computer to spit it out and do it the old fashioned way in six months. Regardless of what happens, if a denial of all or even part of what you asked for occurs, the VA has a time-tested method of correcting it. We recently began calling it a 21-0958 Notice of Disagreement Form. You can call it a Motion for Reconsideration form if it makes you feel all warm and fuzzy. But unless you file a 958, that F-150 is going nowhere fast. And 365 days from the day you’re denied can also evaporate faster that you can say Jack Robinson. Even I’ve done that hat trick. Twice.

The True Motion for Reconsideration at the AOJ

One way Veterans get to reverse a decision quickly (without filing a formal NOD) in what can be truly characterized as a Motion for Reconsideration are older Veterans (over 75), homeless Veterans of any age or those with emergent medical problems who may not make it to Benefits Happy Hour. If solid evidence that clearly rebuts what VA managed to rustle up surfaces, you can have a VA attorney call them up with your POA  in hand and explain the urgency with which the decision needs to be “reconsidered” and a possible solution based on what they are submitting.  It is usually stamped RFN in most  VA Agencies Of Jurisdiction. Outside of this narrow window, the illusion that a VA rater will get your reconsideration and promptly re-review the claim within the next six months with a big dose of Benefit of the Doubt in your favor is a cruel hoax. Who would do such a thing to a Vet? Who would lead him astray on this pipe dream?

The obvious danger is overstaying your welcome and missing the all-important one year deadline to file a real NOD contesting the denial. I’ve seen it happen to the guys who like to think they read their calendars. I’ve heard of even more who blew it off. There is a repair order for this.

We all know that if you get a map before you leave on vacation it’s a lot easier to find your way. We tell many how to file claims and the pitfalls to avoid. In spite of that, many arrive here half-way through to a loss because they didn’t get the briefing in time. If you think VA is going to be fair, look at their Disability  Benefits Questionnaire forms. VA insists you have a disease in service, a disease now (the same) and proof via a doctor’s letter. We call that the Caluza Triangle in fond memory of Mario Caluza who only had two of the three. Well, actually Mario had about twenty nexus letters butthey all disagreed with each other. In order to do this now you have to use VA’s forms. Show me the nexus letter box on a DBQ. Show me where a doctor can fill in a box and state “It is more likely than less likely it’s SC. See my ten page rationale with Curriculum Vitae at the end (attached)”.

You allow the VA to control your claims game with a DBQ. You allow them to do the physical/mental exam and intake physical and relinquish the right to provide a nexus to a “VA examiner”. They almost universally conclude that it is due to the natural course of events in life and you are now half-way to losing your whole claim. All this happened in two and a half months. Welcome to FDCland. You are now in a fight to get what you needed to win after having lost. VA has a denial in place that you have to challenge. You made it twice as difficult as it had to be because you wanted it in a hurry.

This is where having two nexus doctors can come in mighty handy. A pair beats a VA examiner’s bogus denial almost every time out. The problem is that it won’t happen until you win at the BVA in four years. Filing a claim these days is like building a house. You don’t dare start without a permit and blueprints. Of course, if you’ve never built a house before and you’re a Vet, you figure “What could go wrong?” 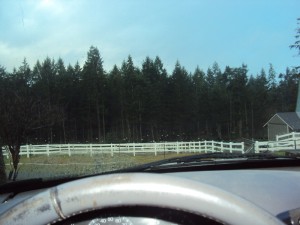 Traveling at Mach 2.3 in Park

VA has sped up this process to a blinding pace to the untrained eye. In practice, it’s best described as “Developing to deny”. This buys them more time to clean out the backlog. Your claim now sits in a second Queue awaiting “action”. This is the area where Vets seem to think they can influence the  time/space continuum and make a new decision happen miraculously. It was born of the late 2014 and 2015 phenomenon of “I called Bob and they got my dependency claim done in four days!” or… I called Allison Hickey and she got my TDIU DRO decision done in less that a week. In fact, I just received my SOC Monday and I already filed my VA Form 9. I’ll have this done in no time.”

Call it a phone call or a plea to the service rep to move mountains, there still does not exist a legal mechanism whereby you can send in a 4138 to Newnan Georgia and say “Yo! I want you guys to look at my claim all over again. The denial says I never had a sore left knee in service. You’re right. It was the right knee. I don’t know why your Medical records say it’s the left. It’s my knee and it’s the right one. So order a new C&P for me.” VA explains that you can actually do this by calling up 800-827-1000 and telling the service representative to fix it. Well, gee whillikers, that ought to knock a month or two off, huh? 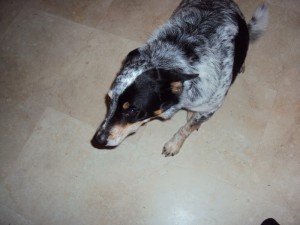 Well, that’s today’s  VA Fact or Fiction Show. By the way, yes. I did “inherit” a dog temporarily. Meet Harvey, 7- Cattle frisbee dog extraordinaire. Harvey belongs to my son’s best man, Daniel. He’s going to Nursing school for two years so the Harvey gig is only temporary. This is good. Harvey has never lived on a farm. His new favorite male fragrance is Eau d’Horse Poupon. Harvey’s been getting a lot of baths. Widget is also temporary. As soon as my son buys a house, he will come and get the dog. I already have sites picked out in the family pet cemetery just in case.