LZ CORK–BOB LOCKETT’S LP AT THE BOTTOM OF THE LZ.

LZ Cork was a zit on Charlie’s ass from the moment they built it in early fall 1968. It’s artillery covered a wide swath of land from it’s high perch. The Viet Cong began an eradication plan in earnest when the dry season began in January. Probing gently for the soft spots every night, they eventually landed on a frontal assault on the listening post down at the bottom at the south end of the LZ.

This was A Company 3/21’s LP and manned by  Sgt. Plummer,  PFCs Bob Lockett, David Balzarini, Dennis Johnstonbough and Bernard “Ducky” Duran. A 60mm mortar round landed right in the middle of them that night about 2325 Hrs. Butch got clobbered in his bunker further up the hill moments later. Bob didn’t mention where the 90-day wonder Lt. Kellenbenz was. He perished as well above in the TOC.

That day, Gypsy Rose Lee, now a spry 58, arrived for a USO morale booster. Bob Lockett had his picture taken with her that afternoon. Right behind her in the picture, wearing a dark t-shirt was Butch, waiting for his autographed photo.No one could know that the future was going to change and dramatically alter 13 lives- 3 permanently. 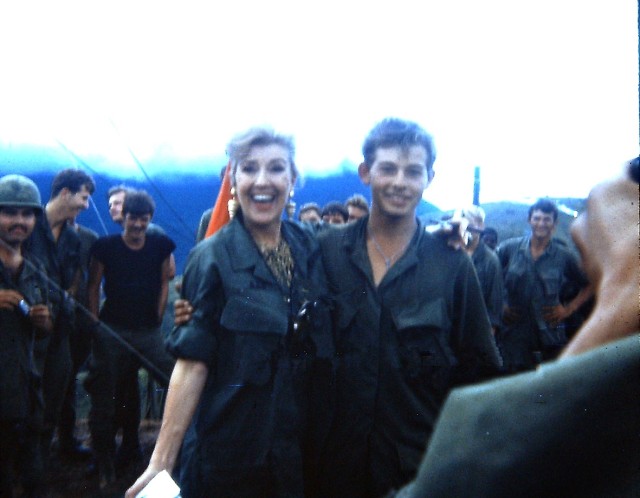 I really appreciate Bob’s allowing me to tell this as so few can comprehend the grit of real conflict. Many of you are planning to see or have seen American Sniper by now. It conveys the same concept of eternal vigilance and angst but it’s still a Hollywood reenactment. The stunt men all get up and dust themselves off and go home. At LZ Cork the poker game was for keeps.

If you look at the geography of LZ Cork, our squad (Plummer/Lockett/Balzarini/Johnstonbaugh/Ducky (can’t remember his real last name) were on the LP down stream from the top of the hill. I have some pictures that can give you some perspective). One of the first mortar rounds that hit was a direct hit of the bunker I was in with Balzarini and Johnstonbaugh(I use that term loosely). I attached a picture of the bunker and I humbly apologize for the “John Wayne” shot. What can I say, I was 20 and assumed I was invincible. 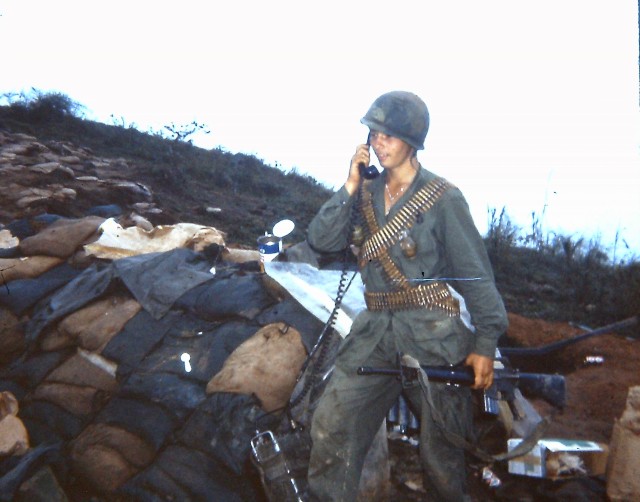 That round cut Balzarini in half and took both of Dennis’ legs. I was so very fortunate, I took shrapnel to the head, cheek and arms, but the wounds were not all that bad. David lived for about 10 minutes after he was hit; I don’t know how. He basically was disintegrated from the waist down. I dragged Dennis to a bunker about 20 yards away, then went back and dragged David to the same spot. Everyone on the LP was wounded to some degree. Ducky had shrapnel to the stomach, I can’t remember what wounds Plummer had. 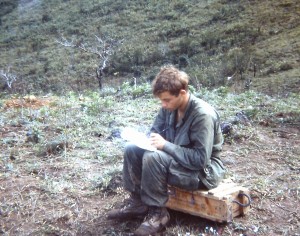 It was pretty chaotic as you can imagine, the VC were trying to overrun the LP, Plummer, Ducky and I were laying down M16 rounds to keep them pinned down. At some point we ran out of ammo and the VC starting advancing again. I was looking for ammo when I tripped over a case of grenades (see picture where I am writing a letter – I am sitting on it. I dragged that back to our position and we started lobbing grenades down the hill and the VC retreated. About that time some guys from the hill arrived in our LP with ammo and that was the end of the fight. I do remember that ‘Doc Campanelo (I may not have the name correct) was one of the guys that came down and he bandaged me up and put tourniquets on Dennis’ legs. It is pretty much blurry after that (they shot me up with morphine) and I got on the chopper for the 312th Evac in Chu Lai. I was there for about 3-4 days, and was transferred to Cam Rhan Bay. I was there about a week (Fagan was there too), then to the 249th in Japan. From there I went to Fitzsimmions in Denver and had several operation. After I was discharged from the hospital, I spent my remaining time at Ft. Campbell.

I have never told this story to anyone – but if this helps Butch at all………I hope he gets his overdue accolades.

As a side note, I thought Post Traumatic Stress was for wimps. About 15 years ago I was in church and started crying for no reason. My wife asked me what was wrong – I didn’t have a clue. Turns out I was going to DC for a convention and one of my ‘side trips’ was to the Vietnam memorial. I wanted to find David’s name. It all came crashing down around me – emotions I did not know just poured out. After I visited the memorial, I tracked down David’s mother in Jeanette PA. I called and told her who I was and I was the last person to see David alive. We both cried and I agreed to meet David’s younger brother in Houston about a week later and gave him copies of the last pictures of David. It was like a burden had been lifted. 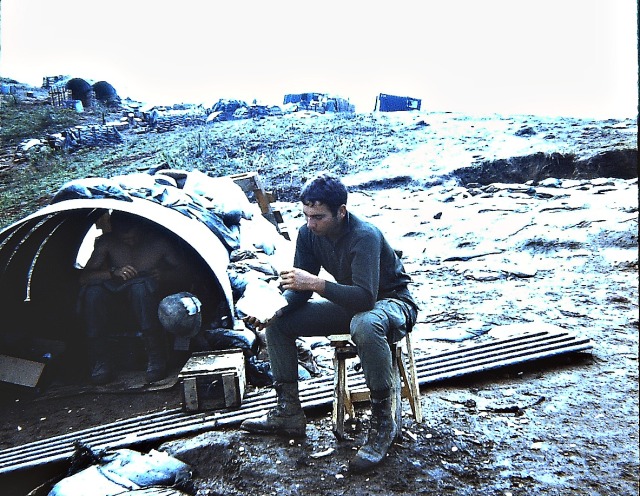 David Balzarini above the LP in the LZ bunker area.

As one Veterans site put it “This ain’t Hell but you can sure see it from here.” I thought we in the Air Force suffered the deprivations of war over there but Bob Lockett’s testimony and pictures speak volumes more than any Hollywood portrayals of that era.

As if all this wasn’t a coincidence that Bob would find his way here now, 45 years later, one of our fellow members of the WIN or DIE VA Claims Club  “Doc”Jules wrote me yesterday. He offered his help in doing an Independent Medical Opinion (IMO) for Butch on his muscle injuries from the retained metal fragments. Turns out, one of his medical acquaintances there was a fellow named Mike Balzarini-yep- you guessed it- David’s cousin.  And in his own words:

Yup, its a small Army but I would hate to have to paint it all.  I showed Mike your posting about Butch and Dave’s last stand and he was quite touched that anyone remembered after all these years. Mike was a medic in the 82nd’s Engineer Bn during the Grenada fun run and went on to become an SF medic. Lately he has been a surgical NP for the past 20 or so years in these parts. He has been helpful to me in pursuing my claims by providing me with orders for MRIs and other objective tests.

When I set out to help Butch, I had no idea this was going to balloon into a family reunion of 3/21’s A Company. Bob’s photos and history fill in a few blanks for some and create more for others but they are real and not concocted by reenactments. The photography accentuates the stark reality of life at LZ Cork- but only the prelude. Here’s a shot of Butch’s infamous bunker up the hill from the LP. The VC mortar round landed exactly  in between the two covers. A direct hit on the one to the right would have put Butch in a heavenly zip code along with Balzarini and Kellenbenz.

Thank you Bob for opening up. Many would find it difficult, no matter how many years pass, to revisit these memories.

PS— Bob enlightened me later to say Lt. Kellenbenz was killed inside the TOC from the satchel charge. It collapsed the roof which crushed him when it fell.  Best to let history be. If the army knew he wasn’t busy fighting, he technically wouldn’t be entitled to a CIB. But we know every officer’s Silver Star was paid for with enlisted troops who were lucky to get a Bronze. Amen

12 Responses to LZ CORK–BOB LOCKETT’S LP AT THE BOTTOM OF THE LZ.