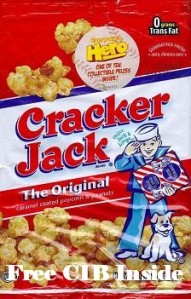 I received a call yesterday from my secret VA weapon at Representative Derek Kilmer’s office. The news was confusing as well as disheartening.  Nick Carr informed me that the Army REMFs are requiring more proof of Butch Long’s bravery under fire and some talisman that proved he had engaged in combat with an enemy of the United States before they would even consider awarding him his Combat Infantryman’s Badge. By way of explanation, the first two letters of REMF stand for Rear and Echelon.   It was suggested Butch contact fellow Veterans with whom he served for confirmation and verification of this event before any discussion about a CIB was going to be forthcoming. They strongly implied they don’t just hand these out like Crackerjacks toys. 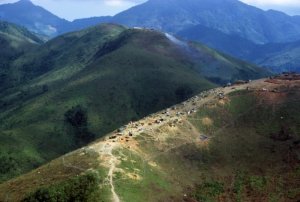 Butch’s Tactical Operations Center (TOC), in what would normally be the most heavily defended portion of LZ Cork, was attacked as mentioned by “three gernades [sic] at doors of TOC”. This indicates the Viet Cong had already penetrated “inside the wire”. VC hand grenades were our old rehabilitated “pineapple grenades” left over from WW2. Mounted on top of them were a wooden dowel and a champagne cork nestled inside with a newer prussic acid fuse. One out of five blew up when you pulled the pin. As you can imagine, they were a really big hit with the Gooks. You can throw them about 25 yards if you are an NFL quarterback. The VC were smaller in stature and were even more distance-challenged. This can only mean the Viet Cong penetrated the perimeter where Butch was and attacked the TOC. They also made their retreat by the same path.  “Possible satchel charges” indicates an explosion much louder than a grenade in keeping with the Viet Cong’s habit of using satchel charges to breach the perimeter concertina wire to gain ingress. As there was only one area of the perimeter that was attacked with eight casualties and two killed, Occam’s razor argues for the simplest explanation of all. The Viet Cong or NVA regulars came through the perimeter following the mortar barrage and steamrollered over Butch’s A company platoon. Butch confirmed this to me but the Army Ouija Board Corps considers that “lay testimony unsubstantiated by the written record”.

Butch’s A Company had two Killed In Action (KIA or KHA (killed by Hostile Action)) on the report) and eight Wounded In Action (WIA or WHA on the report). 2nd Lt. Barry Kelendel was his Platoon Commander however they misspelled his name. It’s Kellenbenz. He was KIA and his military record is available on the Virtual Wall. The second was PFC David Balzarini. He, too, was KHA on the 19th of January 1969 according to the Virtual Wall. You will notice that on both pages the Combat Infantryman’s Badge is prominently displayed as an award-undoubtedly posthumously. I firmly believe Lt. Kellenbenz and Balzarini qualify as “fellow Veterans that he served with” who can plead his cause. Sometimes voices from the grave speak more loudly as they are asked to here. 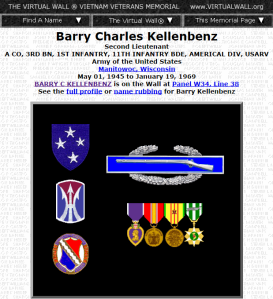 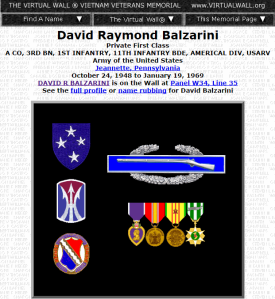 I  also suggest that Congressman Kilmer give SECDEF Chuck Hagel a call and ask for special consideration due to the Army’s unconscionable delay of 45 years in the awarding of Butch’s medals. Butch meets all the criteria for a CIB as defined by Wikipedia. He is service connected for his injuries since discharge. Furthermore, he meets the definition of “combat Veteran” as defined by Congress in 38 USC 1154(b).   Most importantly, his comrades he served with that night were awarded their CIBs. Why the Army REMFs can’t put this one together will remain one of the enduring mysteries like the Riddle of the Sphinx.

My Uncle Jay got a Bronze Star for being captured at Bataan in January 1942 prior to  running the 67-Klic Bataan Fun Run. He also caught a bullet from a machine gun through his ankle, but that is beside the point. He got a second one just for being a POW for three years and 4 months.  If Butch and his platoon got steamrollered by a mortar/satchel charge breach, I’d say a Bronze Star was in order. I’ve seen them handed out to REMFs for far less. Butch didn’t cut and run. He took the brunt of it and they walked over, through and around him and his fellow wounded and dead soldiers. Say what you want to about Butterbars and Ninety Day Wonders but 2nd Lt. Kellenbenz paid his dues. I’d say a posthumous promotion to O-2 (First Lieutenant) and his own Bronze Star is overdue but there is no one to advocate for him…yet. Same for PFC David Balzarini. But that’s a story for another day.

Lastly, the evidence of the TOC attack provokes a “benefit of the doubt” argument. I do not see any reports of another ingress inside the wire at LZ Cork that night so A Company and PFC Leslie Long’s platoon were quite obviously elected to be the WalMart Greeters. They paid dearly. Time for the REMFs to put down their iPhones and FacePlacing to man up and take care of business. 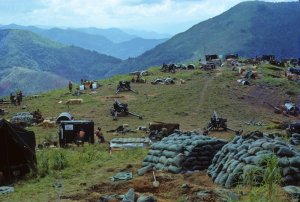 This would make a fine present for Veterans Day next month. Additionally, knowing Butch will not be awarded the Vietnam Campaign Medal nor the Cross of Gallantry with Palm, our East Coast distributor of the Independent Living Program, Bruce McCartney, a four-tour Dustoff Combat Medic from 1968 to 1972 has graciously offered to give Butch his which are contemporary and were awarded when they were supposed to be back when the war was still a work in progress. He and his fellows in the Dustoff Association are also researching their records for Medics who may have flown that mission in 1969. What a wonderful reunion that would be.

We’re one big, happy family that continues to shrink like a dollar. Last I heard, we’re down to 855,000-give or take a few hundred. Seems like a good a time as any to take care of old, unfinished business. 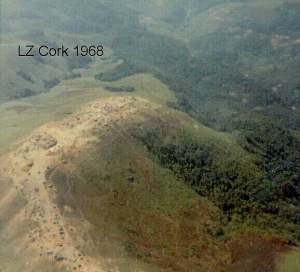 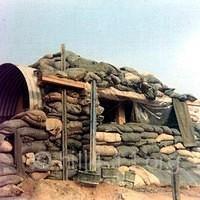 Here’s a Utube video of LZ Cork I found

LZ Cork is a Multipart Series

Here is the next installment