Proof that HCV Sustained Virological Response (SVR) is a myth? 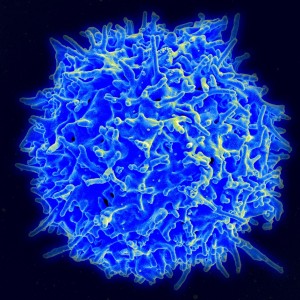 Scanning electron micrograph of a human T lymphocyte (also called a T cell) from the immune system of a healthy donor.

The HCV monster-machines are apparently craftier than we have been led to believe.  Even after IFN/R therapy, and non-reactive (not detectable) standard clinical testing, more sensitive tests prove that HCV RNA still resides in the human body in reservoirs.  The researchers of the small “first” study, Persistence of Hepatitis C Virus during and after Otherwise Clinically Successful Treatment of Chronic Hepatitis C with Standard Pegylated Interferon α-2b and Ribavirin  Therapy (published November 2013) are very confident in their experimental methods, results and conclusions. There is no waffling.

The study is highly technical but I’ve pulled out some sentences, the gist of which, can be understood by this layperson (with footnotes removed). My remarks are in red.

The authors are affiliated with the following institutions: Virology and Hepatology Research Group, Memorial University, Can. Center for the Study of Hepatitis C/Div. of Gastroenterology and Hepatology, Weill Cornell Medical College, New York City; Div. of Gastroenterology, Hepatology and Nutrition, Dept. of Medicine, SUNY-Buffalo.  The study has only been downloaded 212 times so far and cited only twice even though it has greatly added to the knowledge base on HCV.

A preview of the book, HCV Infection and Cryoglobulinemia by Franco Dammacco, is available in Google books.  It’s a good resource. Using the keywords, “occult HCV infection (OCI)” I was able to read a discussion about this issue.

So the upshot for SVRers is to take care of your whole biological system as best you can.

Editor’s note: To all of you who VA says are SVR, this is the smoking gun you need to rebut with. When they say you are pure as the driven snow, wave this one in their face. Take note Malcolm!

8 Responses to Proof that HCV Sustained Virological Response (SVR) is a myth?