I reckon everyone knows nothing gives me greater pleasure than massaging Mother Earth and coaxing Her to grow fruits and vegetables for us. Well, there’s also torturing the VA on behalf of my Veterans to obtain that which is their due. I also get a big bang out of all the “Hints from Heloise”s across the fruited plains which pop up in my Google News Feed every day. Some suggestions are spot on like the 5-gallon bucket mouse trap with the roly-poly stick and the come-and-get-it cheese out over the “moat”. Ahh. Mouse waterboarding. Only in America. So, without further ado, let’s talk about the dog days of Summer. Sure, the shit is hitting the fan in Afstan but you can read about that somewhere else.

First off, any good dog day story around here will invariably involve Pickles who is two. This summer, as she’s become more familiar with the pool, she’s taken to sitting half-submerged to stay cool in between ball throws. I’ve even seen her lie down completely on the tanning ledge until needed for retrieval duties. Such is my Labradog’s love of water. Our neighbor dog Jackson comes over the moment he hears the pool cover being retracted. That’s good. Dogs need play friends, too. Of course, any thoughts of camaraderie fly out the window when the ball comes out.

Touch it and you die…. 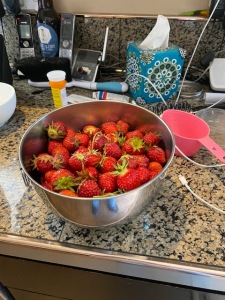 On the subject of fruit, Gaea has been berry berry good to us this summer. I’d attribute it to chemtrails  if I believed in them. They’ve been painting up the sky pretty regularly every day. That would be some kind of powerful fertilizer they’re spraying if it were true. It would also be landing in Montana given the prevailing winds if they spray it directly overhead. But then I have to ask myself- “When has the government ever given me anything besides a pain in the ass?” So my faith in aerial fertilizing is now shot. Besides, just for argument, if they were spraying mind control shit, seems everyone would be walking around in a Zombie-like state and chanting the same doxology like “Praise Biden from whom all blessing flow.” I sure don’t hear anything like that. Fact is, all I hear is dissention on where America is heading-both pro and con. But let’s get back to real fruit-not the fruits (and nuts) currently indigenous to DC. 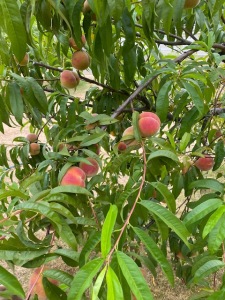 I had to cross-tie my peach trees to themselves to prevent the branches from calving off like icebergs this year. We averaged about 250 peaches per tree. Cupcake finally got involved in the production and read up on when to harvest. In the past she complained the fruit was stringy, granular and not overly sweet. I was accused of planting bogus trees with inferior fruit. Mea culpas are in order here. It was my fault. I was waiting too long to harvest. There’s absolutely nothing wrong with the peach varieties we grow-just the short circuit between the grower’s ears. This year was the to-die-for harvest. Below is one morning’s pickings. Multiply that every day times two weeks. Our neighbors began locking their doors and shuttering the blinds when we pulled up. They do that a lot when I show up with baseball bat-sized Zucchini, too. 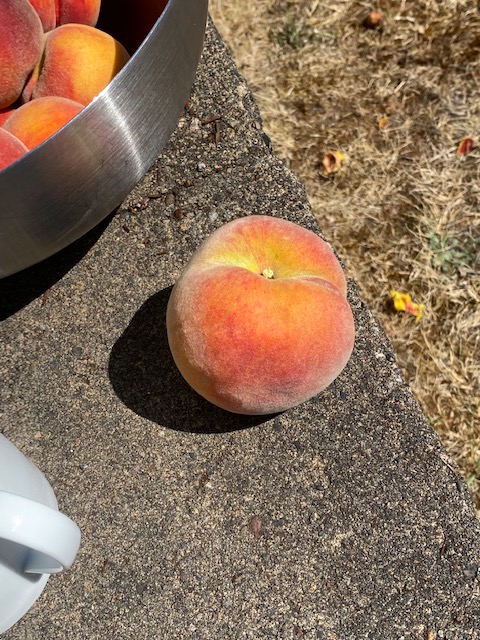 Our Gravenstein apple tree is at one end of the orchard closest to the sun. It got toasted during heat week when we were hit with the 112º Sunocalypse-or “heat dome” as the weather service named it. It cooked one side of any apples directly exposed that afternoon. We lost quite a few. Fortunately for us, our horses are real troopers and volunteered to eat them despite the burns. Nevertheless, the tree still produced 9 five-gallon buckets of record monsters. We still have over 3 more buckets growing that are not quite ripe. We’ve never grown any this big. I’m not kidding you when I say many were as large as a softball. 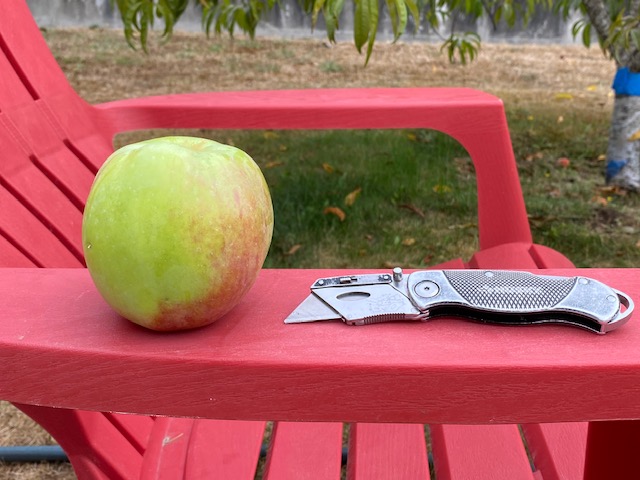 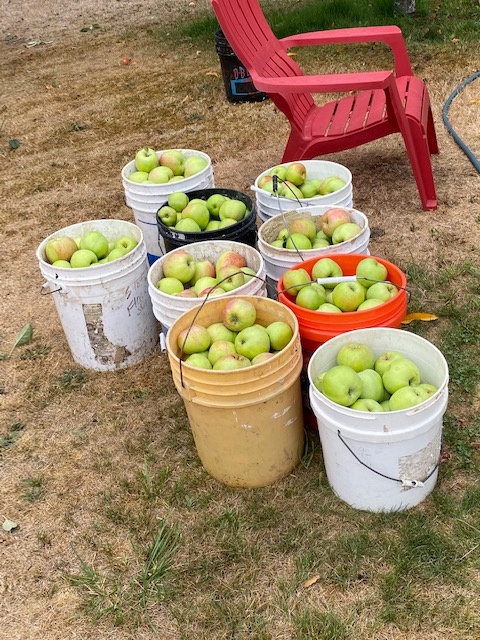 Here’s a funny one. We saw a lot of these abnormalities in our fruit back in 2013  coincidentally the summer after the Fukushima Daiichi Nuclear disaster. Just for shits and grins, I wrote blogs about my strawberries and corn back in 2013 –

CHILDREN OF THE FUKUSHIMA CORN

Sure, it was bullshit but I love a good joke. I’m an April Fool. What I was not aware of was the power of the Internet. Google Search and every other information engine dialed in on that reference to Fukushima and radioactive strawberries/corn and it caused a lot of consternation. Folks emailed me to ascertain they weren’t also in the path of the prevailing winds that led to my being bombarded by the radiation. Others wanted to know if I’d considered co-contamination with the chemtrails as well. The problem with that is our government want to keep us alive so we can keep paying taxes to buy their Perrier Jouet Champagne and caviar with Morel mushrooms on toast points. You never poison the well from which you drink. That’s Government 101 regardless of whether it’s Capitalism or Socialism.

The best part about this blog is those Internet Search Engines are going to glom on to this article and prove conclusively that lo, all these years Fukushima radiation is still roaming loose downwind and has now infiltrated Washington’s corn crops. Well, that or chemtrails. Take your pick. How about 5-10-10 and five-year-old composted horse manure? How about Cupcake planted the corn late and you always get some , err, physically-challenged ears in every crop. For the most part, they were exceptional.

Here’s another anomaly I think was the product of the Sunocalypse- a blood birthmark on a Gravenstein. Of course Fukushima could be the culprit if you’re into Mel Gibson conspiracy shit. Hell- how about Global Warming?  I’ve never seen anything like it. It ran from the stem all the way to the base. We ate it anyway.

Speaking of hints from Heloise, I saw a Google article about the proper way to prepare an ear of corn for consumption. The picture showed an ear exactly like the below. I took my trusty box cutter/knife and carefully sliced the lengths down one of my ears and across the base perfectly replicating the gal’s presentation.

Okay. I give up. If this is indeed how it’s going to be presented at the table for consumption, it must be a New Age vegetarian thing. If so, it’s going to need to be served with a side of about 6 feet of dental floss. We cook our corn naked Kansas style. Bring the water to a rolling boil. Insert corn for 3 minutes. Remove and eat. After 4 minutes the corn sugar begins to convert to cornstarch anyway. I don’t reckon there’s any sugar left after 10 minutes. Do yourself a favor and take a page from Monty Python’s Holy Grail– the counting of the Holy Corn shall be three minutes. Neither shall thou count two nor shalt thou count four. Three is the number of the counting and the number of the counting shall be three. Five is right out.

Now here’s a kicker. Who knew there were different colors of cauliflower? Well, not me pilgrim. Cupcake started growing weird shit this year due to my being so busy. Is this a hoot or what? 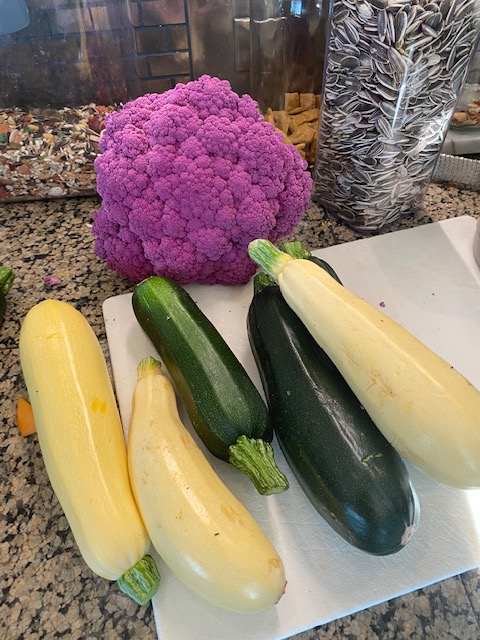 That pretty much wraps up the summer report. Fall will bring the plums, the artichokes, the Brussel sprouts and the Johnny-come-lately Liberty and Fuji apples. And, hopefully a return to the health of the Nation and the end of this infernal disease.  Be safe. Be fruitful and multiply. B. Good. 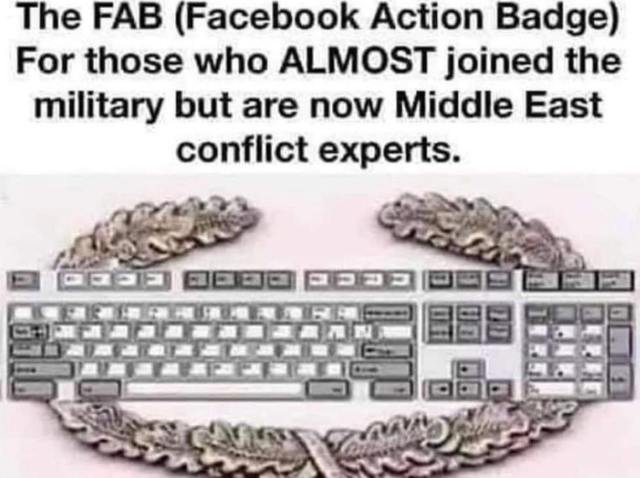