I hope this Memorial Day weekend finds you as blessed as I am. To be alive is not to be taken lightly at my age. While Memorial Day is a remembrance of those who served and have moved on to a new plane of existence, I do not consider them departed. I can still see that curl of a smile on my Dad’s face when he was funning me as a kid. He might be eleven years in the ground in General Robert E. Lee’s front yard (Arlington National Cemetery) but he’s still only a thought away.

Did your dad ever tell you never to push them buttons under the radio dial? I was  briefed in on this in 1958 on my Dad’s old ’54 Ford wood-simulated Ranch wagon . There were five buttons. The first four released the wheels in standard order (port/starboard front and port/starboard rear). The fifth was the fire extinguisher for the engine. If you’ve ever flown in airplanes, it wouldn’t sound strange to retract the landing gear or have engine fire suppression. Besides, your dad would never lie to you.

With that said, I took it a step further with my daughter Heidi. You can see the opposite direction of a traffic light turn from green to yellow. Ergo, you can “predict” when the the light facing you will change from red to green. I’d “throw a whammy” on the light by pointing at it and snapping my fingers and grunting as I closed my eyes. Lo and behold, the light changed green. Heidi quit believing in Santa Claus years before she figured it out. Ah. The things we do for love. 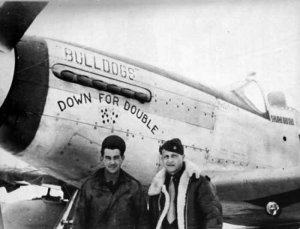 My father’s idea of humor was renowned across the forward air bases in France shortly after the war. He and a few buddies would “drop in” on an airpatch in their P-51s -all with more than five Swastikas indicating they were aces. They’d grab transport over to the Officer’s club Stag bar for Happy Hour. He had a briefcase handcuffed to his wrist and they all had .45s on their hips. Eventually an inquisitive pilot would ask what they were doing in town. By this time, Dad was a Lt. Colonel and his cohorts were either Majors or Captains. Dad and the others would quietly and cryptically explain they were signing up pilots to fight in Africa for the Free French Republic. But only hot shot pilots, mind you. They never had to buy a drink all night long. Eeeeeeeeveryone wanted to join as most were getting ready to return home to Dullsville, USA for deactivation. The story was always the same-there were only a few slots left so you had to be good at deflection shooting and be quick about making a commitment to sign up.

Be All You Can Be – Become a VA Agent

And while I have your attention, I’d like to discuss helping the Veterans who are still here or their widows. There is nothing finer than donning the clothing of David and striking down the VA Goliath with legal stones. Becoming a VA agent is not nearly as onerous as you might think. Some of you toiled for years to win as I did and do not realize you have inadvertently learned a vast quantity of knowledge about the VA process.

This is what I suggest. Take that knowledge and hone it like a knife and use it to help your fellow Vets. If you are well off, you can simply donate your services as I do a lot of the time. The majority of my wins are often at the local level and we win without having to take it to appeal. In these cases, there is no fee to the Veteran anyway which is great. If you want to do it for a living, it will be a slow process amassing any wealth but rich with rewards for both you and the Veterans you help. You almost become another member of the family in most cases or forge lifelong friendships with their children.

Paying it forward is not nearly as difficult as most think. Attached below are several files to download. One is a sample test with 97 questions. To our knowledge, the tests have always been pulled from these questions. The test itself was 28 questions with 90 minutes to accomplish it when I sat for it in 2016. I’ve heard it may be as low as 21 questions now. The pass/fail line is 75% or greater.

Once you pass, you can keep your accreditation forever by amassing a certain number of continuing legal education (CLE) hours every two years. I use NOVA for my learning requirements and also benefit by learning the latest cutting edge techniques from other attorneys as well as VA employees who come to brief us on new procedures.

Interestingly, if you find some of the types of claims I encounter with Vietnam Vets, chances are you’re going to eventually come across a Megamillion Lotto winner who got screwed by VA back in 1970. It’s like unraveling a sweater but no more complicated than that.  Besides, you can always do what the two Agents I’ve coached to accreditation do- call me and ask for advice. Hell, even I call up my Sensei Bob Walsh and beg knowledge occasionally.

It’s my earnest hope that the 350 agents now will one day metastasize into 3500 and spread out across the fruited plains to do battle with this insidious VA monster. Remember, it’s a recipe like baking cookies. Anyone can learn it. With the advent of Independent Medical Opinion (IMO) sites, it’s easy to get a nexus letter tying a disease or injury to a Veteran’s military service.  Time may be of the essence here, however. VA is rumored to be considering doing away with the Agent position soon. All of us who are currently accredited would be grandfathered in but the option would gone forever. It’s certainly something to think about sooner rather than later.

Enjoy what I’ve been enjoying now for three years- kicking ass and taking names for fun and profit. You can spread a lot of good cheer with any profit if you don’t need it, too.  I learned all this from Alan Gumpenberger down in 2016  Spring NOVA in Las Vegas. He graciously allows me to share it with others. Look him up if you want more info on the subject: http://www.alphadisability.com/tag/allen-gumpenberger/

VA adjudication is what we used to call a “target-rich environment” in Laos. There are 350-ish VA Agents/nonattorney practitioners and about 600-700 VA attorneys who do this in addition to divorce, wills, ambulance chasing, Social Security and tax/probate law. Conversely, there are about 3 million Veterans being ill-served by Veterans Service Organization representatives. As I explain over and over, the Congressional Charter each of the 34 VSOs sign states they will help the VA adjudicate the Veterans claims.  38 CFR §14.632, on the other hand, commands an attorney or agent to diligently represent the Veteran to the best of his/her ability and sanctions can be applied for intransigence or stupidity. Very rarely will you read of an Agent charging money to file a claim or accepting Home Depot gift cards to get off his dead ass and do the job he was hired to do. Nor will you read about many attorneys who disremember your VA 9 has to be filed within 60 days of the SOC or SSOC.

I personally think the cadre of VA agents should be Veterans because they would be more familiar with the trials and tribulations of military service. However, I do know many who are not and their dedication to their job often exceeds even the zest and gusto of some VA attorneys.

Here is the Alan Gumpenberger Agent’s exam course presentation in Powerpoint from 2016 and the test questions most frequently asked. Alan didn’t have an answer key so I had to manufacture it myself. It took me two weeks of cross-checking to convince myself all the answers were correct. I began studying in earnest after the March 2016 Spring NOVA Conference and sat for the exam July 20th. I was informed I had passed August 2nd and began my practice four days later.

As for qualifications, the Office of General Counsel (OGC) will run a serious criminal background check on you. You must never have been convicted of any felonies. Obviously, drunk driving convictions don’t count or they would have tossed me for my 6/4/1969 post-graduation indiscretions and the other eight tickets that night for throwing missiles (eggs) at Officer Rohrbaugh, reckless driving, failure to heed 8 red lights, fifteen stop signs and doing 95 in a 35…up a one-way street the wrong way in Hampton/Newport News. I agreed to forgo college and signed up immediately for military service. Because I was 290% disabled, the OGC insisted I obtain a letter from my doctor stating I was capable of this endeavour and of sound mind. I suspect Dr. Lauer fudged his answer as to having a sound mind but I got his mom Aid and Attendance so it was a push.

All the answers are in 38 CFR Part 1, 3, 4, 14, 19 and 20. There are no true, trick questions. Just read through each one to make sure you understand it. If you search for, and study, all these, you accidentally learn and remember each one. If you merely try to memorize the questions and their corresponding answers, you will not embed the knowledge in your brain.

I’m like the Starfish gal. I make a difference for as many Veterans as I can.

Make a difference in a Veteran’s life. Your reward will be immense. Happy Memorial Day to all and I wish to thank all you “starfish” who have allowed me to represent you over the years. VA Agents (and attorneys) do these dirty deeds- and dirt cheap I might add.