“Bombs in your Back Yard” series by ProPublica

Frank has forwarded information to us about ProPublica’s series, “Bombs in Our Backyards.” (LINK)  This work sheds light on the dangerous environmental practices the DOD has been dealing with.

On May 7, 2018, ProPublica’s Abrahm Lustgarten writes: Get an Inside Look at the Department of Defense’s Struggle to Fix Pollution at More Than 39,000 Sites (LINK)

“For the first time, the Pentagon’s internal database used to track its environmental problems is available to the public.”

Veterans Law Judge (BVA), Michael Lane, remanded a case of a veteran who believes his illnesses were caused by exposure to dioxins at the former Norton Air Force Base (1942-1994).

“The AOJ should undertake appropriate development to attempt to corroborate the Veteran’s alleged exposure to chemicals, to include dioxin and/or dioxin-contaminated soil, while stationed at Norton AFB between November 1967 and September 1971. The AOJ should specifically consider the Veteran’s contentions he was exposed while performing duties as a security police augmentee, to include guard duty.” 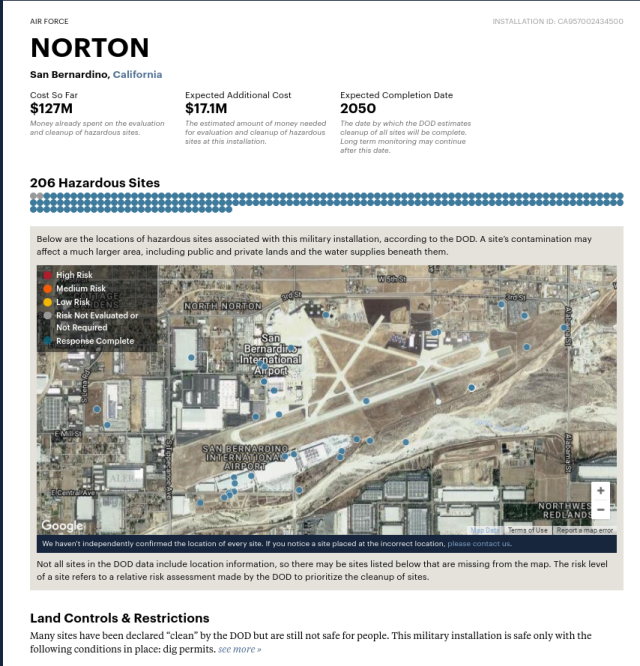 Looking at the dates, in the interest of the backlog crisis and justice, why couldn’t a staffer at the Board pick up the phone or email agency’s (CDC, EPA, etc..) who could easily provide the information?   Or at the San Diego RO?  Or the veteran’s attorney?

“…These matters come before the Board of Veterans’ Appeals (Board) on appeal from a January 2009 rating decision. These matters were remanded by the Board in December 2016… …In March 2017, the Veteran testified at a videoconference hearing before the undersigned Veterans Law Judge.
The decision was 1/12/18.

Norton AFB did not get on the Superfund site overnight (LINK).

An official document from 1990 indicates that closure studies had been in the works for years prior to publication. (LINK)

I think part of the value to toxin-afflicted veterans and their families is to research, with the aid of  ProPublica maps, all the bases they served on.  It’s possible that known toxins may have caused or contributed, (“more likely than not”) to certain conditions.

Thanks to Frank for spotting and sharing this brilliant resource and to ProPublic for creating it.

1 Response to “Bombs in your Back Yard” series by ProPublica