Most Veterans don’t understand how this VA poker game works. I know it took me around the block three times with Veterans Services Organizations running interference for VA against me. Every once and a while I like to look back on VA law as it appeared at the dawn of my last and latest effort to climb the hill. Go back to 2008 and the glorious days of Gordon Erspamer cutting new swaths of law. His work, along with that of the Robert Chisholms, Virginia Girard-Bradys and Ken Carpenters of the industry, have begun to make a resounding dent in VA jurisprudence. With the 25th anniversary (of sorts) of NOVA in a Baltimore, MD. hotel room in 1992, we’ve come a long waaaaaaaay, baby.

And now for this one. It’s a reversal so you know it’s going to have an interesting backstory. That it isn’t authored by Greenberg  immediately piqued my interest.

Rest in Peace, Gordon. We got them to go electronic. Now, if we could just enforce that with more emphasis and power to punish mis/malfeasance at the agency level.  Perhaps we should demand more continuing legal education for older Veterans Law Judges to keep them abreast of precedence. Who knows what the recipe is? A senility test?

Whatever we choose, we have to dispense with petty jurisdictional disputes. Witness a Board member of the BVA feeling the CAVC and Federal Circuit are too lenient and constantly disrupting settled precedent prejudicial to, and to the detriment of, good order and established law. It’s kind of like a guy who rents in a trailer park offering sage advice to millionaire homeowners with a straight face. He’s not even in the same league.

From long-time staff attorney, acting Veterans Law Judge and lastly, a vested VLJ, Thomas H. O’Shay has this to say about his cohorts above- appointed by none other than the President of our United States…

In this case, the most recent final denial, prior to the January 2003 rating decision which arose out of the March 20, 2001 claim on which this appeal is based, was a February 1994 rating decision, which denied service connection for paranoid schizophrenia. The Veteran did not file a notice of disagreement for that decision,

and none of the increasingly myriad of ways the Court has diminished the concept of finality apply in this case;

Shocked. I am shocked. And you can just imagine the look on Chief Judge Davis’ face when he got the brief on this. He probably got the vapors and Greg Block had to hang it on Judge Hagel lickety spit. Sort of like the Pontius Pilot ceremonial washing of the hands. We can’t have the Chief Judge involved with this! Judge Hagel pretty much took the same mighty dim view of Tombo McShay thinking COVA judges were pretty sketchy and got their JDs at the University of Mexico. His muted rejoinder below is a

reminder that civilized legal behaviour depends on verbal constraint and brevity. One’s views about how his decision will be be received if appealed to a higher tribunal should never enter the analysis of a decision. If a Judge, CAVC or Federal Circuit, is overly confident in his memorandum decision, and discretion is absolute, then the potential for a miscarriage of justice is magnified one hundredfold. Trying to view a Veterans Law Judge at the Administrative level of an Agency as a “judge” ignores the cannons of law enshrined in 38 USC- not to mention redefining and inflating a legal term. VLJs are finders of Fact. They are the “one review on appeal” deadman switch designed to right a wrong. The Federal level is strictly the arbiter of case or controversy without the distraction of being a factfinder or court of equity.

Here’s Judge Hagel’s not so subtle rejoinder. Brevity is a keen sword wielded correctly. At ten pages, you’ll find most of it is laying the engine out on the floor and performing a piece-by-piece analysis of the parts- something the tribunal below neglected to do. Haste makes waste, or in this case, myriads of ways to do same.

The Secretary encourages the Court to vacate the Board decision because the Board inadequately explained its determination that the February 1994 rating decision considered and denied a request to reopen a previously denied claim for benefits for paranoid schizophrenia and that Mr. Welch did not appeal that decision, rendering it final. The Secretary reasons that nowhere in the February 1994 rating decision did the regional office specifically state that it was considering a request to reopen a previously denied claim for any psychiatric disorder. Further, the Secretary concedes, to the extent that the regional office indicated that its jurisdiction was premised on a reopened claim, nowhere in its decision did it indicate which claim, of the three it addressed, was subject to reopening, nor does the decision contain any discussion or evaluation of whether new and material evidence was received that would lead to a conclusion that the regional office was addressing Mr. Welch’s September 1992 request to reopen a “service-connected disability.” The Court agrees that the Board did not adequately explain its finding that the February 1994 rating decision reopened and denied a previously denied claim for benefits for schizophrenia, but the Court also believes that another, more definite error is apparent.

What I’m reading is the OGC is shitting bricks and trying to get this back to Tombo to fix it before it goes to the bitchslap stage. Too late. Here it comes. Wait for it…

The Court has made it clear that the identification of a particular diagnosis by the veteran in his or her application for benefits does not limit the scope of the claim to that particular condition. Clemons v. Shinseki, 23 Vet.App. 1, 5 (2009). Instead, VA must consider the general nature of the claim and, by assisting the veteran in gathering evidence, including providing a medical examination, VA narrows the claim’s scope. Id. As the focus of the claim is narrowed, the scope and type of evidence needed to prove the claim are likewise narrowed and made more clear for the benefit of the veteran. The evidence necessary to establish entitlement to benefits for paranoid schizophrenia varies greatly from that necessary to establish entitlement to benefits for posttraumatic stress disorder. Thus, the Court must look to exactly what was adjudicated and at the procedural posture of Mr. Welch’s claim at the time the adjudications took place.

You just know old Hagel and his staff disassembled this thing and laid it out on the garage floor looking for those myriad ways. Finally someone said hey- it was a schizobrain claim in 86. Now it’s a nervous condition in 88 -but hey, it’s a PTSD thing in 94. So if they granted SC for schizo in 2010, then they’re ignoring Clemons and about a ton of other precedence. Plus, they finally granted what he was asking for in 86.

Judge Hagel didn’t set this aside and remand it. He didn’t vacate it and send it back for development. Shoot no. He flat ass reversed it and told Tombo to read ’em and weep as to the myriad ways you can screw up a simple BVA decision by mischaracterizing what the hell was claimed versus what was granted.

Meanwhile, back at the ranch…

In the decision on appeal, the Board repeated this inaccurate statement of the history of Mr. Welch’s claim for benefits for a psychiatric disorder: “In a February 1994 rating decision, the [regional office] denied [Mr. Welch’s] petition to reopen a previously denied claim for service connection for paranoid schizophrenia.” This conclusion is clearly erroneous for three reasons.

First, the cover letter that accompanied that decision merely stated: “We regret we cannot allow your claim for service-connected disability compensation

Second, the substance of the February 1994 decision itself does not contain any discussion of the evidence necessary to reopen a previously denied claim

Despite the acting Board member’s frustration regarding the “increasingly myriad [] ways the Court has diminished the concept of finality,” the Court’s decision in this case rests on one of the earliest: A claim remains pending until there is either a recognition of the substance of the claim in a regional office decision from which a claimant could deduce that the claim was adjudicated or an explicit adjudication of a subsequent claim for the same disability. Ingram v. 4 Nicholson, 21 Vet.App. 232, 243 (2007); see also Hanson v. Brown, 9 Vet.App. 29, 31 (1996) (holding that a claim remains pending until final action is taken or the claim is withdrawn). The regional office’s failure in February 1994 to address Mr. Welch’s September 1992 request to reopen a previously denied claim for benefits for a psychiatric disability [schizobrain] rendered that request pending and unadjudicated until March 2011 when the Board granted his reopened claim.

Judge Hagel could have been spiteful. Rather, he allowed decorum to reign and reined in his tongue-no small feat for a Hoosier- unless, of course, you are a Patrician or had a gentle upbringing. Don’t mistake Judge Lawrence Hagel for a softy, either. He was an Marine Infantry Officer and did an extended tour in country way down yonder in Viet-Nam. I respect anyone wearing a CAR or a CIB from that era. They weren’t handing them out like Mardi Gras beads back then.

The best part of this that our Vet Christopher NMI Welch did it pro se without a law dog. I expect he’s a bit like me. After about thirty years of letting the VSO Pros do it, he finally figured out the poker game was rigged and started gambling at the table with no marked cards. You always win there-eventually.

Congratulations, Mr. Welch. You kicked ass and took names. Thirty one years it took, yesssssssssssssssss. Here’s a panacea for the “Judge”. 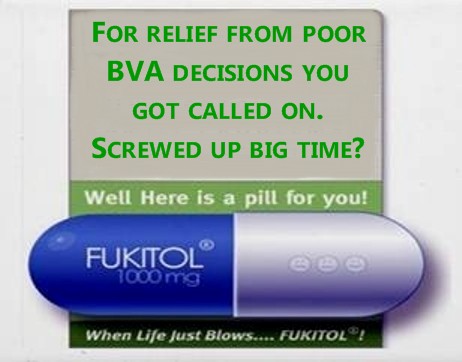 1 Response to CAVC– WELCH V. SHULKIN–PISSING OFF THE POPE