As promised, and I’ve been asked numerous times, I give you the Joe Friday report. Hell. I expect I should have written it Monday morning for a more cliché’d VA approach. Butch and Barb have never had the august pleasure of a DRO review. It was an eye opener for them, I’m sure.

Our DRO (Decision Review Officer) was Karen Haynes-Palmquist. What is it with this hyphen-ation thing? Does the guy have to tote this twenty foot long word around, too?  It’s getting to be ominous-#hyphenatedwivesmatter. She’s running sub silentio as Karen Baker but they can’t hide from us. She’s a GS-13 Step 5 with an $800 “award” for excellence last year. VA eliminated the word ‘bonus’ from their lexicon. Not bad. I was expect one of the big gun Kahuna GS-14s from Veterans Claims Examining. I noticed there are three in the ratings hierarchy. I’d figured these were the ones who would bail out when they went into mandatory overtime several years ago. Many DROs did. Went to GEICO or Allstate they did. Yeeeeeeeeeeeeeeeeeeees.

Karen didn’t ask any questions. In fact, when queried as to what, if anything, she would add to improve Butch’s chances of winning, she was speechless. We had a broad, liberal grant of time from 0945 to 1121 hours. With no forewarning, I was asked to put on a Clear and Unmistakable Error defense at the outset. My menu didn’t have that item on it. I probably could have done it by rote but there isn’t any need. If you’re going to use §3.156(c) evidence to reopen 1970, why on earth would you begin using a Motion to Revise to put a can opener in it? That’s like driving from here to Los Angeles by way of Moscow.

The short CUE story is typical VA. ‘How about you reveal your game plan now so we can develop a dynamite defense when you file your NOD?’ Sorry. No dice, Karen. You’ve never seen the USS Mayflower tied up to my front porch and I wasn’t born that late at night. We stayed in the safe zone and emptied a vast array of very old documents on her desk. They were all sitting at the NPRC for the last 40-odd years. Nothing like the duty to assist, Huh. My favorite was the recent DBQ that denied Butch had any GSW or SFW wounds anywhere on his body and absolutely not one speck of retained foreign body or metal. His x rays said no evidence of broken bones anywhere. Yep. Quality –Training- Customer Service. I’m guessing their x ray machine was invented before Frankenstein.

I’ve been counseled by many VA attorneys to show deference to authority to keep the hearing on a friendly keel. I did so by continuously reminding Karen that she wasn’t born when Butch was taken to the gallows in 1970. Otherwise, the tenor of the presentation was one of “Were the raters in 1970 raised by wolves or did they hire based on room temperature IQs?” I pounded in every nail I saw sticking up. 38 USC §1154(b), 38 CFR §§ 4.1; 4.7; 4.41; 4.42, 4.56, 4.73 etc. We presented each and every reference to “numerous minute metal objects”, “extensive debridement”, “sutures to close SFWs, every mention of a muscle group, the close inter-relationship in the old 1970 Part 4 Schedule of Rating Disabilities between tinnitus and organic brain injury listed as a footnote under DC 6260. Every physical therapy class was noted and the therapy to increase range of motion. I even circled the Camp Zama note “Purple Heart not awarded this station.” 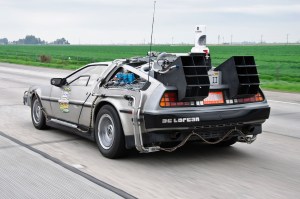 VA likes to play “Inferred” denial side-by-side with the “implied” denial theorem. Basically, that boils down to “We denied you. If we’d awarded it to you, you would have gotten the money. Since you didn’t get the money, it’s safe to say it was a denial -even if we forgot to rate it.” However, when you go back in the §3.156(c) De Lorean time machine, all those implied denials now are new claims that have not been addressed yet. It’s no use to ‘imply’ them off the table. Them’s inferred claims now and under the new precedence, a claim remains pending until there is some compelling evidence it has been addressed and dealt with.

Remember, Butch complained of headaches, earaches, blurred vision, ringing in the ears and a host of other things we associate from sitting far too close to exploding 60 mm mortars. Each and every one of those items can now be reviewed in a more Veteran friendly venue where the 2017 watchword is nonadversarial instead of the 1970 flying saliva salute of “Welcome Home!”

Yesterday morning, I got a call for Butch from our good friends in the C&P business in Diamond Bar, California. Seems QTC just received an urgent request to schedule him in for TBI and otitis media c&ps . Lupa, the QTC technician was flummoxed and couldn’t decypher Power of Attorney. She could only divulge the date of the appointment to him personally or have him give her permission to tell me. And we wonder why it takes years to complete something as simple as a bent fender or broken windshield claim at an auto insurance company.

Personally, I like Miz Lupa’s approach. Call the VA rep. This is why I always paint my phone number everywhere on VA forms. Don’t confuse the Vet. Why even have a POA if you’re going to go behind the rep’s back straight to the Vet? That contradicts everything we know about legal propriety. I don’t see the HIPPA violation about handing out a time and date.

And to my BFF in San Diego who wagered I’ll fail in my attempt to get Butch 10% for tinnitus back to 1970, I do so hope they have excellent old Chateau Lafitte in San Antonio this April. It’s hard to find good wine in Texas that isn’t well done like a charcoaled gray steak.

Time for another Butch and Barb party , folks.

2 Responses to LZ CORK–FIRE FOR EFFECT