GLOBAL WARMING FOR FUN AND PROFIT

Over the last several years I have remarked about how my corn reached 12’6″ and mostly threw three ears per stalk. I had to use a step ladder to reach the highest ones (two Pinocchios). Beets got so large we had to transport them singly in a wheelbarrow to the wheelchair lift to get them into the kitchen (three). We didn’t have knives large enough to cut them so I brought in Cupcake’s “baby” electric chainsaw with the 12″ bar (four).

Seriously, everything is early this year and physically large. Two years ago the strawberries showed up in early May instead of June 1st. The raspberries followed suit and showed up on June 3rd instead of their traditional 4th of July entrance. Several days ago I went out and noticed more flowers in the strawberry patch. Yep. More strawberries. Seems the raspberries are trying to follow suit as well. It must be Bush’s fault.

In all this there were several constants that seemed inviolate. Apples, pears, plums and peaches appeared to be immune to this accelerated  life cycle- until this year. Suddenly, my Gravensteins are the size of

softballs a month early and the peaches are emulating them. Some might say I’m blessed but I’m busy in the garden right now. Everything has a schedule and when something ripens prematurely in the orchard, it sets off a domino-like effect leaving other gardening tasks on hold. A good example is the zucchini got away from me and I now have Louieville sluggers. The folks down at the food bank  are not impressed.  Hell, I’m not even picking the apples and peaches. I’m just picking them up as fast as I can to avoid bunny damage. I have a gaggle of wascally wabbits  lined up at the edge of the

forest with knives and forks wearing cute little neck bibs. If I had my druthers they’d be in the freezer waiting for a good stew but Cupcake has given them names like Flopsy and Mopsy. I have been forbidden to harvest any animals with names at LZ Grambo. That cost me every one of my prepubescent red pears last year to deer while I was in San Francisco at the NOVA 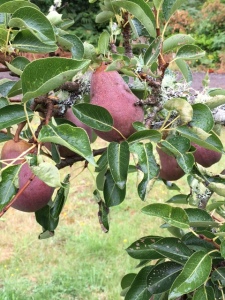 convention. The repair order was deceptively simple. Shoot first and ask names later. Then put an old dog collar on them when you bring them in and say. “Relax Punkin. It was just some rogue interloper named Stanislaus. See? Look at the nametag on his collar, honey. He just looks a lot like Prancer and Dancer.” Women don’t dial on that collar thing. What the hey? Every animal in the forest has a collar with a name tag in case they get lost. Right? 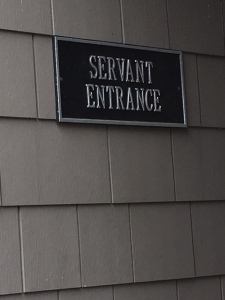 Cupcake bought this for Christmas in 2006 just for me.

In order to keep up with the changing schedule Mother Nature has handed us and avoid waste, we decided to manufacture more apple juice as we did last year during Hugfest. I had a bushel or more piled up at the Buckwheat-designated Servant Entrance with about as many peaches next to them and the yellow jackets were beginning to set up a manufacturing line. Trust Cupcake to find the repair order. Apple cider and peach jam. The downside was she got me up at 0500 to begin production this morning. Where, pray tell, is the law that says apple or peach anything must be produced before 0700 on a Sunday? Show me in writing. I want to see it. 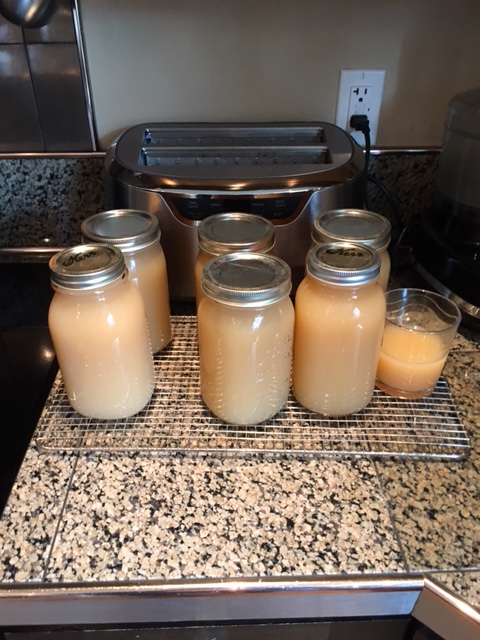 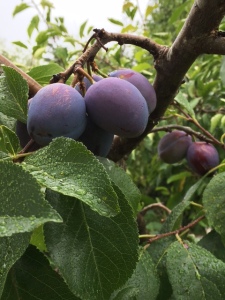 I have two more apple trees which, thankfully, are not following suit like the Gravensteins (yet). The plums are still out a fortnight with any luck. Having an orchard is like a controlled explosion of fruit. Plant the wrong combination and you’ll spend every waking moment out there after July 4th. One thing that will be saving my bacon is that the deer went to the other end of the orchard and ate all the Bartlett pears this year. So I have that going for me.

I always used to enjoy living like the homeless and go deer hunting every fall. Having an orchard and little time to do that anymore solved the problem. One-shot shopping in the front yard- and you can haul it up to hang in the shop with the tractor. That’s civilization for you. Reckon I’ll have to bring a mating pair of elk back and turn them loose around here now. Cupcake thinks the quail and grouse are Cornish hens from the store and I don’t have the heart to tell her differently. Besides, ignorance is bliss. I do have to use my metal detector on them to get that pesky #7 birdshot shot out before cooking though. That would be hard to explain.

All humor aside, I am blessed. Deb’s dad had the foresight to plant all these trees back in 2004 when we bought the property. I only wish he could have lived to see the outcome.

I’m also guessing we should be hearing from our young Judge Meg Bartley soon on the subject of tardy greenhouses. I’ll keep you in the loop on that. Boy howdy will I ever. I’m like a kid the week before Christmas.

P.S. To Grammar Policeman Denny: We thought long and hard on this. We consulted the Oxford English Dictionary. Proper Tense Always! by Hortense Shrouder (1868) and finally arrived at three choices.

So yes. It was thought out.

7 Responses to GLOBAL WARMING FOR FUN AND PROFIT