Did you ever wake up at 2 AM in the morning and become angry with VA? Or more precisely, what they were doing to another fellow Veteran? Several weeks ago, Cupcake and I attended a fundraiser for The Kitsap County Chamber of Commerce. We live here on the Kitsap Peninsula and her business is located there so it was a natural fit. Before attending, my twentieth century fox also mentioned she had a gal our age with a VA problem who would be attending. She asked me to look into it. To me, this is what I live and breathe for. Sugar hates the VA more than I do after what they did to me at the Seattle VAMC for a year.

After getting the 2 AM briefing on the Veteran, I was a little taken aback that he would need my help. After all, he was in the capable hands of the local Disabled American Veterans VSO and their service officer should have been able to do this one in his sleep. Lenny was a World War II combat vet who ran around and collected the popsicles off the battlefield before they spoiled and went over. He did this towards the end of the war on Okinawa which explains why he’s still alive. Lenny is a spry 93 and still hitting on all eight cylinders mentally but he was very young and a FNG when he came ashore at Naha. He wasn’t acquainted with the rigors of rigor mortis. He wasn’t mentally prepared for the horrors of war at 17 and he has suffered for decades from all this. I guess you know VA’s take on it was skeptical- which is odd when you consider the homicide rate there with firearms. The city is veritable war zone from what I read. VA raters must eat, sleep and breathe combat daily.

He has approached VA numerous times and the best he could come away with was a 50% pension for PTSD because VA doesn’t believe it could be caused by combat-or more precisely- his combat experiences. Psychiatrists have now come to universally believe that mental anguish accrues through life and becomes more noticeable when all life’s jobs are finally accomplished and retirement is on the horizon. At that point, the mind is relieved of many of the chores that normally keep it occupied. The psyche is now free to roam around and what does it find? All those ugly, unresolved, suppressed memories of dead folks- friends and foes alike. That’s a fairly fertile ground for PTSD.

PTSD doesn’t have to encompass those you knew or served with. Pretzel brain is a phenomenon that accrues like interest in a savings account- bit by bit. Eventually, you see it piled up and notice it isn’t such a small thing. Now imagine amortizing that ever since 1945. That’s 70 years of interest on a bad dream you had to live day in and day out for a year. Make no mistake about it. Okinawa was Japan’s last stand and it was messy even by Life magazine’s standards. Many of Okinawa’s civilian populace threw themselves off cliffs fearing American retribution for four years of shoddy treatment of our prisoners.

Lenny’s daughter (Cupcake’s friend) was uncertain how to deal with this. She felt he was in good hands with a Veterans Service Organization but they could never seem to cement the deal. Nothing ever coalesced after all the visits to the shrink and the ink was on the record about his documented PTSD. She finally decided to go back to Chi-town and get to the bottom of it all.

When she asked me to review the paperwork she had, it was painfully evident what was amiss. Lenny had called up the VA and said he no longer drove. He said his wife was not in good health, and without a babysitter to look after his most precious possession, he was sadly unable to attend the scheduled C&P. Note that he did not refuse outright. He merely explained why this was going to be a challenge to accomplish under the existing circumstances. His take was to await a better time or a situation that covered his concerns for his wife’s well-being.

No one from the VA or the DAV stepped into the breach. No one scheduled a DAV service van to take him from Rockport to downtown for the C&P. Somehow, a 93-year old on his last legs with poor vision was expected to materialize at the QTC at the appointed hour or risk being denied. No excuses, Lenny. Be there or be square. A warm thank you to DAV’s mental midgets for their foresight and far-thinking.

Lenny didn’t make it. He was subsequently denied by “QD” at VARO 328- the Chicago “Veterans Service Center”. I suggested to the daughter that if she were going back to Illinois to help sort this out, she could employ one of my favorite ploys. Most who know me are aware that I am inordinately confrontational with VA. To date, it has served me well.  Some see it as a deficit. I brandish it freely and smile while doing so. They won’t let us take guns or small tactical nuclear devices into Regional Offices anymore. Far too many of you are inherently timid and shun the idea of getting in someone’s face. VA is no more intimidating than a rude store clerk at Macy’s. The sooner you accept that and shape your attack offensively around it, the sooner you will receive that which is your due. Look no further than my carefully planned bushwhack set up over thirteen months prior to the filing of my Extraordinary Writ of Mandamus in January of this year. In forty five days, I accomplished more than in the prior twenty one years of fighting VA. In fact, by September 4th, I had won everything and am now writing the sequel to my first book on how to do it on the new electronic battlefield.

Lenny’s daughter took my advice because she had no preconceived notions of how to deal with this rude behaviour. I pointed out the most obvious factors first. 493 Veterans of World War II are dying each day. They are becoming rarer than hen’s teeth. Were she to walk into the Chicago offices of Fort Fumble pushing Lenny in a wheel chair before her, she was going to be tackled by many helpful GS-12s in short order. They would be tripping all over themselves in an effort to stay off the six o’clock evening news. At 93, you get the Platinum service and don’t have to stand in line anymore. Age, rather than rank, now has its privilege. Being a living, breathing combat Vet of WWII is about as platinum as one can get these days at VA.

Tactical timing is also everything. I urged her to employ the “First-Thing-Monday-Morning” air strike.  They haven’t even settled in yet. Watching coffee come out the nose in a fine spray is an excellent measure of how important Lenny suddenly is.

As with any good recon, you want fresh intelligence reports. It serves no useful purpose to arrive with a bitch and have no idea who’s to blame. Enter the asknod “Who’s the fool, fool?” tool. Over the years I have discovered all manner of shovels to excavate the culprit at my local puzzle palace. No one on the 800-How can we help you? number is going to cough up the bozo that denied you. One thing most of us discover to our dismay is VA is an “incognito” outfit. They leave the minimal footprint behind of their shenanigans. I get that. If you’re error prone to the degree they are (65%), you do not want a trail leading to your desk. Towards that end, I finally found the above device to unearth them. Anonymity is now a fig leaf they can nay hide behind.

I gladly shared this little tidbit with his daughter. In less than three minutes I translated “QD”, the author of Lenny’s denial (again) into a real flesh and blood human being.

Ladies and gentlemen Vets, meet Quandale D. Davis. Unless he had a chipmunk in his pocket, the “we” in “We made a decision” is a fig newton of his imagination. 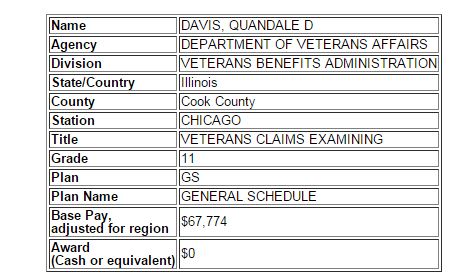 A man’s name is his magic talisman in life. Everyone will come to know him and respect him if he’s unique and honorable. Quandale was an anomaly. I’ve never come across anyone with the moniker. Being a GS-11, he was pretty small potatoes around there and not really in charge. Lenny’s gripe rested far higher but Quandale was a viable starting point.

Lenny’s daughter marched in smartly and asked to speak to with him which caused ripples of consternation at the reception desk. How was it she knew Quandale? In short order, she and Lenny were seated in the Director’s office and engaged in a spirited conversation on why it was Lenny was getting the shaft. A retired Marine who works as a Service Officer there was immediately drafted and detailed to take personal care of this historical artifact and to make sure he and his daughter had all the necessary assets with which to accomplish a Compensation and Pension exam-including transportation and babysitting services if necessary-RFN.

I expect to hear that Lenny will be at 100% permanent and total in short order. Sadly, his wife may never get DIC but will be eligible for A&A and many other benefits in the near term that have been withheld by the Quandale’s of their VA life. If his death can be linked to PTSD, she will. If she outlives him, she will still be entitled to a war widow’s pension and continuing Aid and Attendance.

And that, folks, is how VA justice is extracted from these gomers. Never be shy with VA. Never be worried that somehow you may “piss them off”. Don’t get mad. Get even.  The Department of Veterans Affairs was created to serve you-not obstruct you. Once you absorb that metric, a whole new consciousness will be born in you and the righteous indignation at being ignored and delayed in you mission will begin to rise in your breast. It’s an exhilarating experience, I guarantee you. VA lawyers experience this “high” frequently. I know I sure do. Perhaps that is what drives the best of them to do it. Helping others who are helpless or unknowledegable is a noble endeavour and richly rewarding.

One small step for Vetkind…