Recently, I wrote about an irate Vet who went off on me re PTSD. In that post, I implied something I wish to clarify. While I have only met, for the most part, combat Vets who have been severely affected by their experiences, I inadvertently excluded a large number of others who, by their service, were most definitely bent upstairs by their wartime occupations. Meet Bob.

Bob NLI (no last initial) is the brother of my good friends up the street who graciously accept all the squash, tomatoes and anything else I can’t pawn off on the food bank. Pat has a fantastic pear tree so we get along like peas and carrots. Bob has been trying to convince VA for years that he has bent brain syndrome, and if ever a fellow Vet qualifies, he would be the one. As usual, VA wants some proof he has a stressor.

As mentioned above, Tan Son Nhut Airpatch was the final port of embarkation for all Army/AF/Marine souls departing Vietnam. Regardless of whether you came home in a box or arrived vertical, this was where you exited. You converted your  Military Payment Certificates (MPC) and piasters into greenbacks, 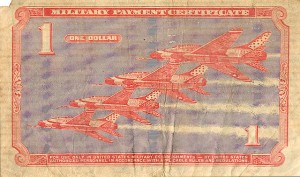 took a pee test to determine how much heroin you’d recently consumed and made sure your shot book was up to date. If you flunked the piss test, they kept you around until you could pass it. Uncle Sam couldn’t, in good conscience, send junkies back to the World. As an added explanation, we weren’t allowed to have greenbacks because they might fall into the hands of the North Vietnamese. I’ll leave that to the economists to figure out how it might have crashed our economy. If that were the case, where is the concern about Al Quaida obtaining them too? I misspelled that on purpose.

Bob, our non-combatant, was the fellow who delivered the red, white and blue popsicles from the Medical Cold Storage unit to the flightline and supervised loading them onto the C-141s heading to Yakota Air Base Japan and on to Hickam AFB in Honolulu. There, they were triaged to determine who could have an open casket funeral and who most definitely was not a candidate for the project. Each temporary silver metallic casket contained a body bag refrigerated to retard spoilage. Each casket was draped with an American flag hence my reference to a Neapolitan popsicle. His AFSC was probably “Mortuary apprentice” or some such thing but the general nickname on the Flightline was the Good Humor man. It certainly did not describe the mental state but more the vehicular delivery method of the corpses to the C-141 and the macabre humor only we military gomers can come up with..

For some reason, VA takes the position that this, by itself, should not be a stressor, or, in the alternative, should not be so depressing as to make your life a train wreck forever. I wonder if there was some set number of corpses one had to handle before the magic “impact” surfaced whereupon it did indeed become a qualifying stressor. Bob describes his personal best in 1968 as about 40 in one day after the Tet misunderstanding. It was so bad they couldn’t get them all into the Starlifter and he had to take some back to the hospital. He jokingly described it as “standing room only”.

It’s mindboggling to me to even consider such a job. I might have requested a transfer to the Army and 11 Bravo before I’d do that. Admittedly, I sat on body bags once to eat lunch because that was the only shade thereabouts. Nevertheless, in retrospect, it still has an impact on me today. I won’t try to explain it. They were Pathet Lao. Most wouldn’t understand. When you’re dead, nobody cares except your family and friends. By then, if you were a dead stranger, your death sure didn’t come up on my radar. Bob, on the other hand, dealt with this day in and day out. He begged for another job or a break in the routine. Being low man on the E scale at E-3, he performed the yeoman task day in and day out. 12 on-12 off. Eventually, it ate his brain. Or so he says. VA disagrees.

VA’s take on this is to tell him it’s all in his head. He agrees wholeheartedly with that assessment but wants to be rid of it or reduce the damage. Psychotropic drugs don’t work. Alcohol wasn’t much help either. Pot seems to squelch all but the road rage if he drives. For that reason, he rarely does. He lives alone, unmarried, and ekes out a horrible existence on about $900 a month on SSD. In a word, he’s damaged goods. VA really couldn’t care less other than to offer-yup-more drugs.

This is why I take keyboard in hand to rectify my mistatement. Yes, there are many of his persuasion who were put in this circumstance and I’m equally sure they were mentally affected by their line of work. Ferrying dead people to the Freedom Bird, even if they are antiseptically sealed in little shiny boxes adorned with the symbol of the greatest nation on earth does not ameliorate the angst and depression associated with the task. I don’t think there is anything the military could do to lessen the despair you would feel doing this day in and day out. Bob made it about 8 months before he crashed. I apologize in advance for the scatological humor but that is a shit ton of of popsicle depression.

Bob will be my next project as soon as the VA permits me to represent Veterans. Never have I met the poster child for entitlement that exceeded Bob’s in someone who never witnessed a shot fired in anger. Yet.

And that’s all I’m gonna say about that. Hell, that’s about all I can say about it.

Well, except to say Bob won 70% for Christmas. We’ll work on 100% here directly. I’m busy with too many Vets so I need to catch up.