VHA–YES, WE HAVE NO HARVONI 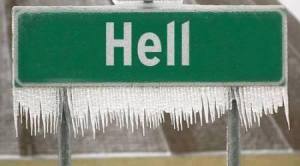 This just in from member Mike. Fargo, North Dakota is officially out of Harvoni or you have to wait until Hell freezes over to get any. Mike reports it’s not even a normal wave off with red smoke. They say they have no money for it. Not only that, it’s a new transplant (liver) Mikey’s talking about that is on the wrong side of the triage line.

Think about this. If they allotted X dollars for Harvoni throughout the Fruited plain, stands to reason some of it would land in, of all places, Fargo. It has to be on VA’s radar. This is May 2015. Mikey’s a Vet. Mikey’s also  a Vet with a new liver being destroyed by the old Hep C virus still in his body. Make’s sense to protect the new liver with a bumper to bumper warranty right after you install it. Yeppers. Makes sense just about everywhere except at the Fargo VAMC.

Now, since I know a little bit about VA law, I’ll let you in on a little VHA secret. You can file a Notice of Disagreement on one of their shiny new  21-0958 forms and file it at your local Cheeseville or Newnan intake center. In it, you list the reasons why you need Harvoni and why it is oh-so -much- more- economical to fix it now rather than to wait and destroy a practically shiny new liver. You get Dr. Cecil to opine that to wait is to ensure a host of evil outcomes including cirrhosis of the new liver/ ascites/spider angioma/ esophageal varices just to get started.

Yes sirree, Bob. And you thought you could only file and appeal for benefits. We going into a whole new realm of litigious innovations. HCVets are at a crossroads for a cure and VHA is pulling out the empty pockets and signaling the LZ is too hot for the dustoffs to come in.

Maybe we need to get an advance on the docket because if we wait the traditional amount of time now, we’ll be dead before we get a docket number to sit on the Group W bench.

The newsflash from Sam in Palo Alto is garbled. We’re gonna start you on it any week now. Maybe next week. Maybe the week after.

Houston has it. American Lake Tacoma apparently has it for everyone but me. Seems that it depends on where you live and if you have an autoimmune disorder or a migraine this week. They have it in Baltimore but not at the VA. Jimmy Durante would be proud were he still alive.

P.S. Randal and another Vet  are getting it in Denver but they don’t trust old Randy not to sell it to the highest bidder so they only give him a two-week supply and make him drive 70 miles one-way to pick it up. Only at the VA, ladies and gentlemen. Only to America’s sick defenders.

12 Responses to VHA–YES, WE HAVE NO HARVONI