When you get to the CAVC, you at least get the Judge, or more appropriately, the judge’s little people, to thoroughly investigate a case; this in a far more balanced perspective than the slanted judicial Titanic deck of AOJ and BVA where they keep rearranging the deck furniture (the facts) to keep them dry.

Meet Mr. Edward Eugene Clark, a Veteran of the Cold War front in Germany. You can tell right off the bat that if Gene’s Grandma and Mom journeyed to Fort Jackson, South Carolina to see him after he got a heapin’ helpin’ of southern fried jetguns in 1972 that he probably was sick. Maybe not sick with a capital S  but enough to get momma on the warpath to Fort Jackson on a Greyhound with Grandma in tow for mutual comfort and support. I find women often travel in pairs when in distress. If you have two irate mommas coming after you as a medical professional, you better have majored in Public Speaking. We’re talking 1972. You can’t get a word in edgewise.

Six weeks after my son enlisted and was in boot camp, my mother and I visited him at [the] Fort Jackson[, South Carolina,] hospital, along with several dozen young men that seem to be affected by the same thing. We were never told what he had. Several weeks before his illness, when he was being inoculated for several things that are required by the [A]rmy[,] Gene described to me the condition of the pneumatic injection system used by the military. He described the condition of the apparatus[] as being covered with blood, skin, and pieces of flesh after dozens of soldiers had been inoculated ahead of him.  Clark v Shinseki (2011).

Sound familiar? Flu-like symptoms and prolonged fever? I’ve heard that so many times from a lot of you. Sounds a little like my jet gun indoctrination. I can’t say that I became ill though. I came down with it in full bloom along with Hep. B in 1971 -89 days after a minor encounter with an errant 7.62 rd. 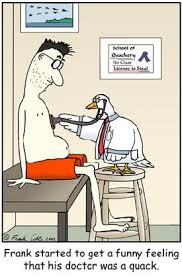 Gene also had a claim in for his back that devolved into a nexus war. Let me show you how VA can build a medical record out of thin air. The blue below is VA examiner #1 who lays the groundwork for #2 (in red) who comes in behind a year or two later and pours concrete around #1’s “ruminations”. The Board then turns that into a rebuttal of the Presumption of Soundness(in purple) Note Examiner #1 uses terms like “If it was indeed a…” and “might be“, “I am unable to determine definitively“, etc. The Court has routinely labeled this as equivocal mumbo jumbo that leads to “probably not a good idea in my Courtroom.”  He admits he had a “back event” in the cervical area of the spine before service. He was declared sound for enlistment. He injured his back thrice in the service. That is all you need to know. He had no post-service injuries -just “surgical interventions” which do not constitute an injury. Well, unless you’re using a 26 year-old VA back surgeon named José with a MD from Guatemala Witch/Medical Doctor University. That’s why they wrote 38 USC §1151.

‘To give an impression of’ translates into “Most doctors, but not all, might think it’s …” Radiculopathic pain is pain that shoots down out of your back/hips and into your leg. I have it from an unscheduled aircraft landing in what VA would probably call a sylvan (forested) setting..

In an addendum, after reviewing x-rays, the examiner opined: I think his back injury is related to [his] lumbar symptoms[,] so I do not think the cervical spine injury when [he] was 16 is related. However, I am unable to determine definitively if an injury to his lumbar spine in 1972 might be related to his current symptoms. I do not have x-rays to review; however, I think if it was indeed a mild lumbosacral strain that it is probably less likely than not that this injury is the cause of his current lumbar symptoms.

Sounds like someone who is conflicted until the thirty pieces of silver come out of the pouch. Okay, so far so good. You couldn’t convict OJ Simpson with that. Now we advance to Examiner #2 who will pick and choose select words, dodging the “might be related”s and the “do not think”s. Examiner #2 will create medical facts such as this brand new diagnosis:  ” a lumbosacral strain” metamorphoses into something entirely different below. Surgical interventions likewise loses it’s postcedent “interventions” and is abbreviated as “multiple back surgeries” now. Kind of reminds me of my fishing buddy Wade. Them fish got huge after a few years.

In October 2008, VA requested another spine examination, apparently under the mistaken belief that one had not yet been provided as directed by the Board’s June 2006 remand decision. [I’m so sure!] Later that month, a VA examiner reviewed Mr. Clark’s claims file and conducted an examination. The examiner noted two pre-service and three in-service back injuries, as well as three post-service surgical interventions. The examiner recorded Mr. Clark’s current complaints and symptoms and [T]he patient’s back condition is less likely than not related to his in[-]service lumbar strain. The patient is 53 years old. He has had multiple back surgeries. He had an injection beginning in 1983 and surgery in 1989 and 1995. These can certainly be from age[-]related changes or other just normal activities of life. Additionally, the cervical injury of 1971 from wrestling and the automobile accident [of] March 1972 with a diagnosis of lumbosacral strain, although he was asymptomatic on entrance exam[,] it is less likely not contributory to his current back condition.

Gene now carries a diagnosis of L5-S1 strain now instead of the more severe “injury” in Examiner #1’s C&P. Get used to this technique. In the process, they have just eviscerated his Presumption of Soundness in purple.  He also had numerous surgeries he’s plumb forgot. Now watch them do something similar to him on the Hepatitis C claim. Here’s Veterans Law Judge Vito A. Clementi’s version of how it went down:

It is wholly unworthy of belief that medical services personnel of the U.S. military, in a peacetime environment and engaged in an activity directed towards ensuring the health of its members, would engage in such patently negligent performance of their duties so as to not ensure the hygiene of such [jetgun] immunizations.

As to [Mr. Clark’s] account of “stepping on needles” used by heroin addicts, it is also inherently incredible that [Mr. Clark], presumably knowing of his roommates’ predilections, would not have immediately reported to sick call instead of waiting over 20 years in this attempt to gain VA compensation. [His] allegations are contradicted by his [service medical records] which show that [he] never made a single complaint related to be stuck by an infected needle or scratched or bitten by other servicemen who were heroin addicts.Clark supra

Now let’s see what Judge Hagel’s minions had to say about that.

The Board essentially denied the existence of the second element–in-service incurrence– because it found that Mrs. Clark’s statement regarding Mr. Clark’s description of the circumstances of his inoculation was not credible. The Board did so because it simply could not fathom that the U.S. military would act in such a negligent manner. This conclusion is devoid of any actual analysis and is insufficient to support a finding of incredibility. See 38 U.S.C. § 7261(a)(4); Wood v. Derwinski, 1 Vet.App. 190, 193 (1991); Gilbert v. Derwinski, 1 Vet.App. 49, 52 (1990). At no time did the Board discuss military procedures for inoculating recruits during the period at issue, nor did the Board consider that such “negligence” is only negligent in hindsight: that is, what we today would consider a dangerous and unsafe practice as a result of the relatively recent understanding of blood borne diseases might have been standard practice at the time of Mr. Clark’s service. See VA Fast Letter 04-13 at 1 (June 29, 2004) (regarding the blood-borne nature of hepatitis C). Clark supra

The above in red is why I chose this decision. This will give you valuable ammo to cite when the next VLJ bozo comes out with a cogent “”That’s incredibabble” in your Hep C denial. See this as well:

The Board also found Mr. Clark incredible with respect to his statement regarding exposure to dirty needles used by heroin addicts and to being bitten and scratched by heroin addicts because of a lack of documentation in service medical records that he ever voiced his concerns about these events or sought treatment for bites or scratches. Although the Board characterized this as evidence weighing against Mr. Clark’s credibility and, ultimately, his claim, it is actually the absence of evidence, which is not the same as negative evidence. See Kahana v. Shinseki (2011) ; McLendon v. Nicholson (2006) Clark supra

Decisions like these are how we lose and think we never had a case. Words really do hurt. Everybody knows that-just like when Jesse blew off Nell and left her. You remember. He rode off on horseback into the “E” in The End in that car insurance commercial. What more proof do you need?

Hang around me too long and you’ll need a shrink or a six pack of beer every hour. But that’s not the teaching moment. VA’s proclivity to cheat is.