Being a stand up legal guy and wanting to get this anally co-rect, I glossed over the Groves v. McDonald Extraordinary Writ from Hell. There I noticed several filings stating

Three to be exact. Each one was a doorbell to the CAVC Judge to apprise him/them of the VA’s clumsy attempts at trying to right a wrong as quickly as possible and ending up slipping on a banana. Laurel and Hardy comes to mind. Each “notice of activity” was the equivalent of geese in the courtyard (pun intended) of the castle honking to sound the alarm. VA simply could not sneak up and do their dirty deed and present it to the Court as a fait accompli. 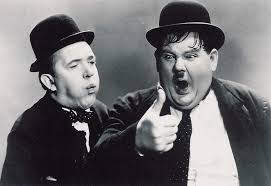 Here, Old Gene Groves turned into a modern day Clarence Darrow. He quickly sounded the alarm on each and every “repair order” VA was attempting as quickly as they tipped their cards. Sometimes the order in which these things occur shows Mother VA is a far cry from nonadversarial- indeed bellicose.

Giving credit where credit is due, and seeing the infinite legal possibilities in a deck severely stacked against us, I, too, opted to embrace this new regimen. And so, after mail call in Battle Creek had come and gone, my shield bearer was forced to conclude that neither snow nor rain nor heat nor gloom of night was going to be responsible for the rebuttal of the presumption of regularity of the mail. The mighty VA had struck out. They failed to notify him of my February 19th, 2015 decision. He, my designated POA holder, was forced to discover on Facebook of my win. Just kidding. You think VA attorneys have time for FB? They use e-jungle drums. A precedent like Groves is felt across the whole fabric of legaldom instantly.

Being an adroit law dog and feeling dissed, he promptly filed my “Notice of RO activity” and wanted to know who was in charge of the Christmas card list. Now, we know from my last installment that VA has once again low balled me. This is the fourth time and feels like Contract Bridge. The bid is approaching three no trump but VA is weak on this hand. You want to show your strength so you stare them in the eye and say four. You know they are in denial on their surrender but they have already caved on the SMC to 94. What’s the repair order? Toga party! No, I long for those days too but the correct answer is to steal the thunder.

We know that next Monday, March 2nd, the OGC will have to stand tall before the Man and answer for their sins. What better way to steal their thunder and make them look like boobs before they get in the front door? Their post hoc rationalization machine is going to look like a snowblower trying cover up a car. Twenty two years of stupidity requires some sharp, pressed Saville Row sackcloth and last Wednesday’s ashes from St. Stephen’s on the forehead at a minimum. VA doesn’t have that. Now, they are going to arrive with a stale offer far short of that asked for in the Writ- the 100% for the Porphyria.

LawBob Squarepants struck just the right degree of umbrage and got in his 2012 jab subtly.

Remember. VA hasn’t even begun to get out of bed over at the OGC yet. They haven’t seen fit to assign a staff attorney to handle this as of today.  Ruh-oh Rorge. That’s okay. Bob cc:’d them, too.

This is a continuing series on how to build the perfect Writ (Birth of a Writ). To view the next installment please click here: