From the Vietnam footlocker of life, we pull out a story of one who thankfully missed his opportunity to be immortalized on the Vietnam Wall. On that day, three would die and fifteen would suffer life-altering changes from their wounds. This is the story of one- Leslie “Butch” Long, A Company, 3rd Battalion, 1st Infantry Regiment, 11th Light  Infantry Brigade (Americal). Duc Pho was a coastal city and sat astride Route 1-the only highway running north/south in Vietnam. By 1969, all the bridges had been blown  numerous times and the only way in was by chopper.

Duc Pho was a hotbed of resistance to the Saigon regime as it had been to the nineteenth century French colonization and the Japanese invasion in WW2. These folks were inured to war and suffering. Here’ an interesting article about what was transpiring just a year or more prior to Butch’s arrival.

Christine Copeland who belongs to Key Peninsula Veterans (KPVETS), my local unaffiliated Veterans outfit here on the Key Peninsula, approached me shortly after I was able to wrangle my medals out of the Air Force after 41 years. Her story was heart-rending. No less than six VSOs, service officers and others had promised to help Butch get his medals and recognition for his service in the Republic of South Vietnam all those years ago. I know how it feels. Many promised me the same in my pursuit of Veterans benefits and never delivered. 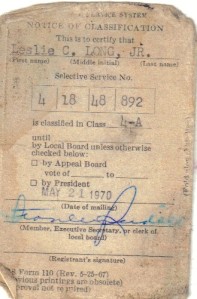 Christine’s entreaty was couched with admonitions. “Don’t promise me something you have no intention of doing or attempting. Been there done that, Alex. I have a pearl necklace of failures to show for it. Butch’s daughter was born while he was in-country and she wants closure.” Fortunately for Butch, his wife Barbara is a packrat and kept everything related to his service. Butch still had his draft card in his wallet. This is the stuff dreams are made of if you intend to prevail 45 years later with the Army. Even more so if you intend to go after the VA for benefits- and boy howdy are we on that warpath.

January 18th dawned hot and humid. No surprise there. Monsoon was recently over and the high season for Viet Cong activity was in full swing.  Butch had only been in-country about four months and the VC had been low-key up to now. At 0710 hours, a Long Range Reconnaissance Patrol (LRRP) departed LZ Cork for a day in the woods getting in touch with nature and their inner selves. A minor encounter @ 0750 resulted in one KIA (Killed In Action) North Vietnamese Regular (NVA) in uniform. No weapons were recovered as the zipperheads tended to take them when they bugged out.

Butch’s A company and the Recon patrol remained at LZ Cork for daytime defense as the other companies had the unenviable task of wandering in the vicinity of the LZ looking for trouble. After discovering a cache of M-16 rounds wrapped in banana leaves, one of their number began to suffer convulsions and the first Dustoff was called in for a penetrator rescue on a hoist. Dustoff was accomplished at 1340 hours to 312th Air Evac at Chu Lai.

Things went pretty well that afternoon. The LRRP wandered over to Nghia Hanh and had lunch. Companies B,C and D moved freely about the countryside until the evening dinner party began at 1845. About then, D. Co’s 1st and 2nd Platoon reported an ambush at dusk en route back to the LZ. Artillery from the local fire base was called in to COORD: 567634 and 44. The next day they would find several VC KIA in that vicinity.

The first signs of trouble began about 2325 hours when 60 mm mortars began their inexorable “walk” into the camp as Charlie got his range and azimuth corrected. According to the SITREP, it was sporadic and involved about 15-20 individual mortars and satchel charges. Just about then Charlie got inside the wire and the party began in earnest. 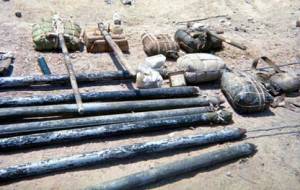 The gooks headed immediately to the Tactical Operations Center (TOC) and hurled in satchel charges and grenades. By 2345 hours  it was all over. The VC had made an orderly retreat with no casualties. A company, where the zipperheads came through behind the mortars was the hardest hit. The TOC was in shambles as well with numerous wounded personnel.

The final count was ugly. The TOC had one KIA and seven wounded.

Butch’s A Company took the brunt of the assault on the perimeter and had equally bad luck: 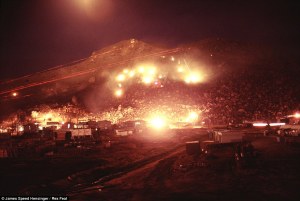 Butch had the misfortune of now wearing a good part of a 60 mm HE round. One shard went through his right eye and lodged near the outer wall of his brain. More SFWs (shell fragment wounds) lodged above his right eye, shoulder, chest and arm. Counter battery mortar fire by now was in full swing with Four Deuce (M-30 107mm) flares for illumination. Dustoff arrived shortly after and choppered the wounded and dead out by 0030 on the morning of the 19th.

Butch was air evac’d to Camp Zama in Japan via the 95th Air Evac out of Da Nang to enucleate his right eye. They popped it out to get at the SFW and plugged it back in like a wine cork. The big problem was the brand new white spot in the middle of his vision. The surgeons also determined leaving the mass of metal fragments in his forehead and right arm/rt. thigh was medically acceptable. I suppose it was then but metal moves around after 45 years. It’s coming to the surface these days like spring rocks in a New England cornfield now.

After enlisting the help of my able US Congressional Representative Derek Kilmer again, VA coordinator Nick Carr worked his usual magic. He was able to get the Daily Officer’s Log out of the NARA archives so we can get Butch his overdue Combat Infantryman’s Badge (CIB).

When Christine first showed me the telegram informing Butch’s parents of his mortar misadventures in Duc Pho, I knew he was entitled to more. Any discussion of long overdue medals, including a Purple Heart, was going to have to include the award of the CIB. Those of you in the Army, present and past, know what a CIB means. Manhood. Standing firm in the face of the enemy. Bravery and more -bravery under fire.  Failure to cut and run. Camaraderie in combat. 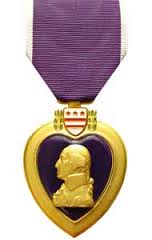 We now await the Army and their slow pedantic pace in making a decision on whether Butch truly “deserves” a CIB. The quest for the Daily Log was the proof we sought. It’s simply a matter of hurry up and wait now. When the day arrives, Representative Kilmer will award him his Vietnam Service Medal, his Army Commendation Medal, a Purple Heart, and the coveted Combat Infantryman’s Badge. I expect they’ll throw in the Battle of Fort Hood medal we also call the National Defense Service Medal. Any who serve in a time of war get this one. Since the Republic of South Vietnam no longer exists and we have a thriving export business with Ho Chi Minh’s descendants, Butch will not be receiving the Vietnam Campaign Medal (shown at the top of my blog) and the Vietnamese Cross of Gallantry (with Palm). He’ll have to purchase those separately.

Butch isn’t doing well. It’s time to revisit his VA claim that gave him 10% for scars. Notably, he wasn’t awarded Special Monthly Compensation K for loss of, or loss of use of his right eye. His right arm resembles a lobster’s inasmuch as it is now the “feeder claw” and not the killer claw it once was. His range of motion and actual ability to use it is severely restricted. All those VSOs and well-meaning folks who didn’t get his medals for him also managed to neglect his VA claims as well.  What? You expecting to get whiskey from a bottle of wine? Since SMC K is awarded at the time it can be demonstrated entitlement was deserved, we intend to go back and revisit the 1970 VA award for CUE. I also hope to get Butch a 100% disability for his residuals of the mortar injuries. His time in the sun is long overdue. I aim to fix that.

A warm thank you is in order to all who have helped me in this endeavour. I was simply the mailman but am proud to play even that small part in getting Butch his due. So many of us came home to a hostile, indifferent society that just wanted to put paid to the war and us. As sad as it is to say this, I almost feel like belting people my age who come up to me and vomit that inane saw ” Welcome Home!” Where in the Sam Hill were you when we came back in the sixties? Being all you could be in Canada? Why did Vets like Butch  have to slink into the US and change into civvie clothes before we hit San Francisco International Airport to avoid the opprobrium of the anti-war protesters. I take that back. Butch didn’t have to suffer that indignity. He was medivac’d straight to Letterman General Hospital to get his eye remodeled.

I am too harsh. I suppose I should tell of the many who desperately wanted to serve in Vietnam but there were only 2.9 Million slots. So they held a lottery and only the lucky guys with low numbers won. In fact, about 58,400+ hit the winning combo with the Golden BB Powerball. The rest had to settle for backwater jobs in Germany, England and Spain. 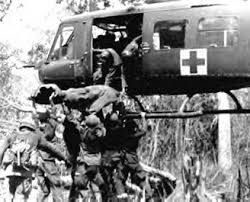 I’d like to take this moment to also thank the brave men who flew our dustoffs and the Guys in Back (GIBs) who kept troops like Butch alive long enough to reach life-saving medical attention. No braver men ever served armed with nothing more than an S&W K-38. And that’s all I’m going to to say about that.

LZ Cork is a Multipart Series.

Here is the second installment