Those of you who never served incountry in Southeast Asia during the ‘conflict’ are unaware of the other army of civilians who quietly and surreptitiously worked alongside our servicemen during that period. Air America was many things and many names. It was born shortly after WW II to help fight communism around the world. Technically, it began as the OSS’s personal air force beginning in the late ’40s. After the birth of the CIA, it was variously known as Civil Air Transport (CAT),  CASI- Continental Air Service Inc. It was Bird & Sons Air- or simply Bird Air. Like a caterpillar, it would retreat into a cocoon out of sight for years-only to be reincarnated like the mythical Phoenix again. Think back to Nicaragua in the ’80s. Remember Southern Air Transport? Same airline- probably many of the same pilots in charge and a new batch of antique, refurbished 130s and Goonybirds- all prefaced with ‘O’ for obsolete on the tail number.

Air America, or simply AirAm, was composed of a civilian cadre who, more often than not, were former military Veterans from WWII or civilian chopper pilots who wanted more excitement than cruising over LA at 1800 Hrs reporting the traffic jams on KXLY. It was composed of fixed wing pilots who couldn’t find a berth at a respectable airline due to their personality quirks or prior sketchy FAA records. The “cargo delivery specialists” (kickers) were, for the most part, smokejumpers who fought forest fires. One thing they all had in common was that je ne sais quoi of adventurers variously described as the Terry and the Pirates™ gene.  I don’t think anyone consciously enjoyed seeing green tracers corkscrewing up to meet you as you came left on final at a remote airstrip on top of a karst.  But what the hey? Some seek the thrill of cheating death.

I guess I didn’t think like that. I was one who tended to sit on my flak vest and even tuck it up around my jewels like a diaper when we went down lower for a Bomb Damage Assessment. From what I recall, a flak vest never stopped a 7.62 round. Maybe grenade fragments or flying 122cm debris. It was more or less like a pacifier to a baby- a welcome wooby blanket falsely conferring the illusion of invincibility.

I liked to take a thumper and HE with us to harass the Pathet Lao while we circled waiting for the 56th SOW Sandys to show up from NKP. I’d keep the vest wrapped around my bugout bag full of ordnance between my feet until the tracers began flying and things got shitty. My PIC was a bit skittish about carrying gold rounds but drew the line on having WP in the cockpit. It wasn’t until I saw a human Roman candle running through the trees one night outside  the wire that it dawned on me what that would look like in the enclosed confines of an O 1 or a Porter. 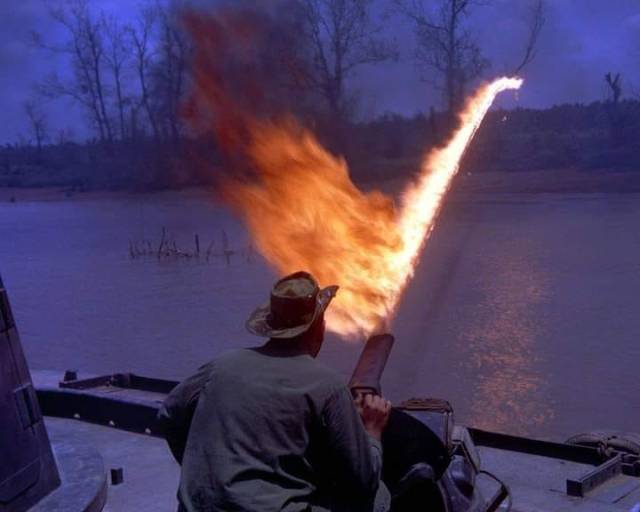 Oddly- or maybe not depending on how you look at it- the Veterans Administration is in charge of disbursing benefits to AirAm folks as well as the Merchant Marines. I’ve had the limited pleasure of helping a fellow airman go after his hep C benefits. While he and I never crossed paths or met, we both served in the same time frame up in MR II (Military Region 2 also known as Barrel Roll). He was more an admin weenie working out of Lima 8 Wattay Airport than a full time 123 driver.

Now, contrary to popular belief as seen in the Air America movie, we didn’t run opium  from Lima sites to the French Heroin lab down in Vientiane. Quite the opposite. We ran good scotch and gin up north to the Luang Prabang AirAm hostel or to Alternate from the Class VI store at Udorn. Scotch doesn’t need refrigerating. It certainly deserves ice but in war, you make do with what’s at hand. The Hmong were artisans and created quite a few lovely works of jewelry out of .999 silver. Ditto the Hmong ornate black powder muskets. We were known to buy or trade for them on the side. Hollywood let their imagination run wild in their faux attempt to depict off-the-grid war. I reckon that happens when war isn’t quite as exciting as portrayed. I’m sure there was some discrete drug running afoot but our stock in trade was pigs, chickens and hard rice (M 1 carbines, 60mm mortars and hand grenades).

To me, a classic example of the hardships of war was the dearth of tonic water and real limes. We substituted Kaffir limes, quinine pills and Perrier most of the time. Ice was a luxury. You crushed up the chloroquine phosphate malaria pills and stirred them into the  Perrier- or just plain water if nothing bubbly was available. I found out fifty years later that I probably overdosed on the chloroquine because we were only supposed to take one pill a week. Making a good pitcher of  Tanqueray and Tonic required four minimum. Perhaps it was a godsend.  When I think back on it, none of my friends or I ever got malaria.

AirAm folks were like Wyatt Earp. Remember the TV show with Hugh O’Brien? Brave, courageous and bold? I vividly remember just before Monsoon 1970 during Operation Leap Frog, we were circling a downed Sandy. The pilot had successfully egressed the A/C and was trying to beat feet away from that bright orange and white ‘chute. His partner had hit Bingo and bugged out leaving us there on station to keep an eye on him.

Every morning, a pair of HH 53 Jolly Greens from Det. 5, 38th ARRRS would launch at 0dark30 and land at Alternate for the day to bring them closer for a more rapid SAR (Search and Rescue) response. We’d called in the SAR request to Cricket the moment he punched out but BUFF wouldn’t be there for about 30 minutes even if they were sitting there already spun up and awaiting launch info.

Some of the braver Pathet Lao troops were beginning to stir after the airstrike and started spreading out to search for the pilot. We were generally armed with a M&P .38 six shooter or a Model 39 S&W 9mm and a CAR 15 but we were instructed to dump the hardware and surrender if we found ourselves down in Indian country. Most all of us also wore 24 kt. gold necklaces or bracelets in hopes of bartering our way out of death or capture. It didn’t work very well. But that’s another story for Memorial Day. Or maybe never.

We had zilch for air cover at that moment and the Jolly Green pilots were always adamant that they have fire suppression before they’d even discuss going in for the extraction. We did have a 911 in to 432nd TFW for a couple of fast movers out of Udorn but that was equally 45 minutes or more out because they didn’t have guns and had to be loaded out with suitable ordnance like nape or CBU. Things were beginning to look  pretty shitty and we’d run out of WP marker rockets to harass them with. Ditto my HE thumper rounds.

When out of the blue, here comes a OD green H 34 with the AirAm logo from the north of all possible headings. He called in on Alternate’s tower frequency (118.9) and asked where the pilot was hunkered down. Just like that. Not ‘where are the Indians?’ but ‘where’s the pilot?’ We guided him in and he landed under heavy fire and scooped up the zoomie. No air cover. No door gunner. Just the PIC and the crew chief hanging out the starboard cargo door encouraging that ol’ boy to pai lao lao RFN. The PIC probably had him back at what passed for an O club at NKP before the BUFF folks even arrived on station.

What can I say? Balls. Big balls. Waaaaay bigger than any I’ll ever grow. These folks are also Veterans just as much as you and me-perhaps even more so. They didn’t get any medals. The pay was so-so. They didn’t get hostile fire pay or hazardous duty pay. The fact that you were on flight status and a senior pilot didn’t didn’t give you much more than a $10 pay hike for sitting in the left seat. And yet they’d put their lives on the line in an unarmed A/C and do that for us. This particular instance wasn’t a fluke. I’d heard of similar situations-many of which didn’t have a happy Hollywood ending.

I thought long and hard about what to write about this Veterans Day and the only thing that came to me was the subject of this article. While I might write occasionally about that challenging tenth tee at the Plain des Jarres Golf and Country Club or grouse-hunting with a sawed off Model 12 and buckshot at Ban Na, I have neglected to ever discuss the tales of derring do of AirAm’s PICs (pilots in charge). Happy Veterans Day to some of the bravest of the brave. They ought to be awarded Air Medals with Vs or ArComs. Never have unarmed, untrained pilots exhibited such courage in any conflict before or after. Or, if there are such people, I’ve never had the pleasure of sharing a single malt with one- or my chloroquine tonic water abominations for that matter.

And that’s all I’m going to say about that. I think this NOTAM says it better than I ever could. Happy Veterans Day to all of you.