Hey there, VA campers. I hope your misery meter is lower than whalepoop. If it isn’t, and your liver can handle it, pop a Corona, aim it towards Wuhan and give them a raspberry. As you may have noticed, Jerrell and John’s radio show is on a different bat channel. We’re really not sure why but believe it has something to do with a requirement that we abstain from stepping on the third rail of anything of, or having to do with, religion or politics. J&J decided they would have a hard time confined in that corral if one their tongues accidentally slipped and something untoward escaped their piehole.

Towards that end, we have the same policy here on asknod but a radio show is not print format. The words escape into the nether regions for me but with everything archived nowadays, someone can go back and feign offense with something I said in 2016. It’s about enough to drive a body to bent brainism but such is the New World Order of social media. Nothing evaporates into thin air now. Nothing.

Which brings up the subject of what Cupcake said the other day. She’s set up to do virtual meetings with her real estate agents now that we have no-contact orders and are required to obey them. I don’t have a problem with that. I’m 69 and have a major compromised immune system. The last thing I need is any kind of bug-super or not. Anyway, Cupcake has a studio that would be the envy of Rush Limbaugh right next to me here in the LZ Grambo TOC. We’ve been debating starting our own show for over a year but I don’t want to seem unappreciative of John and Jerrell and their show. I expect there is no such thing as being too thin, too rich or having enough Veterans’ venues to teach VA law. I’m going to have to get a new pair of headphones because Cupcake’s purple ones are a wee bit too girly for me.

Anyway, John, Jerrell and I will have a raucous hour of VA knowledge to share with you all and I’ll regale you all with a few morsels of VA stupidity. I wrote a Memorial Day blog where I touched on some of this but the fact is VA personnel, with the exception of most of our Change Management Agents (CMAs) who work solely for us attorneys and agents, seem to have lost their collective minds. The level of animosity is getting more and more full frontal and brazen. One would think the hierarchy would come down on them like a cheap new polyester suit. One would think wrong if s/he did. Most times the error is resolved but with nary a peep about the offending individual being born and raised by feral hogs.

The call in number has changed unless you all copied it from my last post on this.

And that sweet young thang from Britain will answer the phone and whisper sweet nothings in your ear about the show. I’m gonna go out on a limb and say you probably have to push the numeral one (1) to talk to us. If you do not plan to talk, refrain from doing so. We don’t need to hear your chihuahua bark for an hour.

I wouldn’t mind old Lilly Tomlin as the phone attendant. Wouldn’t that be a hoot.  “Welcome to blog tawk radio. And to whom am I speaking?” 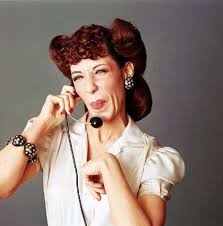 Anyway, I look forward to a good time to be had by all. No guarantees, but I think John and Jerrell have this new site in order to avoid running afoul of all the political correctness flu this year. If something insults your sensibilities, please employ the hang up button. For those of you challenged in this respect, you will find it on your screen. An example is provided below:

Remember. Six feet folks. No less than six feet from the phone. And the masks. Don’t forget your masks. If you’re hard of hearing, I suggest using the speaker gizmo.