Everyone would like to think they have the mustard to contend with any catastrophe in, on and/or around their haciendas. That’s probably why you see so many of them folks after a hurricane standing on their roofs waving a white flag whist clutching a bottle of Jack Daniels™.  Saturday is humor day. Listen to the story ’bout a Vet named Jim, a rich electrician who loved to go fishin’.

At the ripe age of 67 7/8, when the shit hits the fan, I now call in an air strike. There was a time when I was adventurous but with an onboard defibrillator and a few other 100% disabilities, Echo 6 actual no longer feels quite as bulletproof. I can still whack a coyote at 2 AM in the bottom pasture from my back deck in my skivvies but that’s about as adventurous as I get nowadays.

Brownwater Jim lived two doors over from us way back when.  The fact is we were well-known by our local constabulary and our neighbors back in the 90s. It seems there was a mobile home down range of my house we rained some bird shot down on inadvertently during a New Year’s party one year. My hunting buddy, Deputy Bob Larson, whose house I had built, dropped by a third time and told us to put the 12 ga. away or he was going to take it. Without admitting guilt, we promised we’d find the culprit and make him cease and desist if we heard him do it again. Problem solved. Jez, I can imagine a SWAT team out there in this day and age.

One late spring morning in 1995, the Jimster theorized he had a large, smelly cat under his house. They’d heard it banging around down below the night before. I’m not sure if he ID’d it on the aroma or a confirmed sighting inside the wire. Apparently, a screen in a foundation vent had parted company allowing entry. After reconnoitering the crawlspace from several other vents, he determined it was a skunk.  Here in the Northwest, we generally have an 18″ deep crawlspace with plumbing and ducting below the joists. Jimbo’s crawler was about 30′ by 40′.  Now, if’n you’re gonna go skunk-fishing, you need good lighting. Jim, the consummate fisherman, armored up with his Navy®-approved 12 VDC Tactical  aircraft landing light rated at 2.1 million candlepower. This is like a four-deuce battery of acrylic white flares going off on a moonless night. You almost need sunglasses even if you’re holding it. It requires a 12 Volt car battery and will suck it dry in about 3 minutes unless your engine is running. It also works well for deer hunting on the way home after dark.

Not knowing how well-armed the skunk was,  Brownwater Jimbo decided on his Glock 19 in 9mm.  Anticipating a charge if it was rabid, he took an extra clip.  Full well knowing he might be fighting in close quarters, he wisely chose his trusty Ka-Bar for backup. His entry into the crawler was through the floor access in the master bedroom closet – a  22″X 24″ hole. It’s a 360° blind entry until you’re in and down flat. Depending on which version of the story you’ve heard, he went in hot—- feet first with the knife between his teeth, the Glock in the right dominant cocked and locked and the light in his left. Sadly, this was before phone cameras. A thousand words can never suffice to paint this picture. 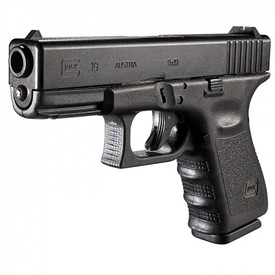 Mr. Skunk was setting up shop about 20 feet away in a big pile of underfloor insulation  requisitioned from overhead. Jim said they stared at each other for a few seconds before he realized the light had him paralyzed. Carefully lining up, he made sure there was no plumbing behind Pepé. Jim, of all people, is well-acquainted with the acoustical properties of supersonic bullets so I’m not sure why he went in with no hearing protection. I’m equally sure he wonders himself to this day. As most know, shooting 9mm, .357 mag, .40 S&W and .44 mag (or 5.56mm and 7.62x39mm) inside or in extremely close quarters is an OSHA violation as well as conducive to extreme permanent hearing loss.

Jim pulled his first shot and winged Mr. le Pew and that was all she wrote. Pepé cut loose before the kill shot a second later. A quick retreat was notably unsuccessful in trapping the smell below. In spite of sealing the carpeted lid with duct tape, the aroma continued wafting up through every nook and cranny elsewhere. His son was on the verge of departing for school and picked up a sizable amount of the smell as well. By this time, you’d never know if you were hosed or not anyway. The smell even made it down to my place. By this time the neighbors were congregating out front to see if there was any good gossip afoot.  Twenty minutes later, when Jimbo’s son arrived, the school sent him home. His car was equally hosed by now, too.

What to do? Call the Fire Department. They arrived but did nothing more than commiserate it was an unfortunate situation. At this point, Jim finally did what I would have done from the get go- call in the airstrike. It was an expensive repair order but the smell gradually returned to normal. We still give him shit about missing from 20 feet. I can almost guarantee someone’s gonna drag that story out at his Eulogy. That’s good. Folks should always remember the good times of their friends’ lives at their wake. I wonder what they’ll talk about at mine? Deerhunting with my Dodge “.30-06” 1 ton van?

And that’s all I’m going to say about that… until the wake.