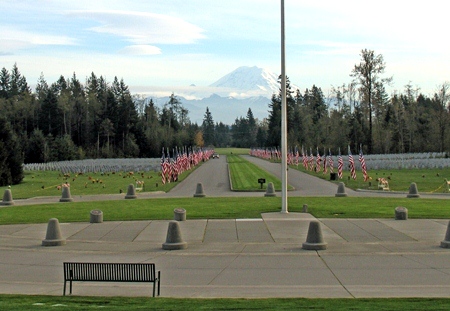 This just in from our Brownwater contingent on the lower peninsula. I do so love humor.

A group of Veterans playing a round of golf at the Veterans Administration golf course located at American Lake in Tacoma encountered a terrible mishap yesterday morning. Police are investigating this as a possible homicide but it appears possible it may have been an inadvertent accident. Witnesses’ reports vary widely but several factors are known.

Apparently, a younger group of four women Veterans were teeing off from the ladies tee on the first hole and one, a Ms. Vonida Trapes, was last to tee off. Trapes whiffed her drive and followed up with a five yard blooper. She addressed the ball again in front of the box and succeeded in topping it another ten or so yards.

In an apologetic response to the men patiently waiting on the men’s tee, she turned around and remarked

“ Excuse me. I guess all those f–king lessons I took over the winter didn’t help very much.”

One of the Veterans, 66 year old Lenny Watkins volunteered some moral assistance and tried to inject humor into the moment. His fellow members of the foursome contend that the comment was not very well received.

“”Well, there you have it. You should have taken golfing lessons instead!”

Seconds later he was struck violently in the head by Trapes’  3-wood. Witnesses vary in their narrative of how this happened. The ladies’ contingent maintains the club slipped out of Ms. Trapes’ hand in the middle of her backswing during her third stroke. The men contend that the club was purposely thrown and than Mr. Watkins, who was facing away from Ms. Trapes at the time, never had a chance to duck.

Funeral Services will be held next Saturday, the 21st of September at St. John’s Episcopal Church in Lakewood and interment will follow at  Tahoma National Veterans Cemetery in Kent, Washington at 1 PM with full military honors. Remembrances are requested to be sent to the United Way. Viewing will be all day Friday, the 20th, at Von Brock Mortuary in Spanaway. Mr. Watkins is survived by his wife of 46 years, Theresa, his three children and 8 grandchildren.