When things have dragged on for more than three years and the Regional Office really can’t remember who you are (nor could they care less), it sometimes helps to throw a Ulysses  Grant coupon at it and watch the 027 OGC Gang start jumping through the hoops all the while explaining why you should not be granted a Writ because they’ve already fixed your problem. Funny, after ignoring you for over three years, it just so happened that at the exact same time you were filing the Writ, they were busy at work on this selfsame claim. Imagine the coincidence. In fact, within the last 55 days since you filed on March 20th, they de novo’d the sucker, called you up, sent you out to QTC RFN and everything was uploaded to VBMS the night before last. Fact is, the whole shiteree will be done before you can say Bat Masterson. What refusal to act?

In reality, Mr. Ralph Bratch, Esq. has been cooling his heels outside the Atlanta Regional Office for the last three years patiently sending in reminders and queries  while being steadfastly ignored. Some Judge who will remain nameless and I’m too lazy to look up           (okay, it was Farley) said, in writing the Jean Erspamer decision:

“While there is no absolute definition of what is [a] reasonable [amount of] time, we know that it may encompass months, occasionally a year or two, but not several years or a decade.” Erspamer v. Derwinski, 1 Vet.App. 3, 10 (1990).

To this day, VA has taken that to mean that, at a minimum, they can blow you off for three years and dodge the Writ bullet. Mr. Bratch wisely didn’t waste his time or Mr.  Dan Clifton Culbreth, Jr.’s before that as it would never give him the minimal three-year standing to justify pitching a bitch. Realize, too, there will never be an equitable settlement that qualifies as “substantially prevailing” before the Court which is the minimum predicate for at least EAJA fees. The OGC is adamant they will “fix” this inequity such that they defeat the “refusal to act” codicil. I’m pretty sure we can count the number of wins in the Ex. Writ arena and the sum of the EAJA fees in all cases to date wouldn’t top $10,000.00 yet- even assuming NYC as a lodestar. There is rarely an ‘e’ in expedite until a Writ is filed. In sum, Mr. Bratch and his leagle beagles are out some postage and preparation time on the Writ Filing and will never see any money for doing it. The only reason to do it was provoke momentum on Mr. Culbreth’s claim. What’s better, it didn’t even cost Culbreth $50. He filed as an indigent.

Personally, I get antsy having to wait three years. VA claims they have created the Rube Goldberg Eternal VBMS behemoth that can swallow whole VARO caseloads into a single gagabyte and render 98% correct OCR decisions within 125 days. Ask them to do it to a NOD and they seize up like “Hold the pickle. Ho-ho-hold the lettuce. Special orders really upset us. We’ll get back to you in a decade or so.” As Judge Farley clearly enunciated though, a reasonable amount of time might consist of ‘a month or a year’ (or two)- far less than that magic three-year minimum to begin complaining. If VA can now do a claim in four months or so, shouldn’t four months be the benchmark time in which to consider a NOD, review any new and material evidence  and discern error? Or the obverse… who, in their right minds at the Atlanta Puzzle Palace thinks three years just to begin ruminations to accomplish anything is par for the course? Hell, yeah. In this new VBMS wonderland, we expect world-class  customer service.

With respect to the handling of this matter, the AVSCM [Asst. Veterans Service Center Manager] indicated that “VA acknowledges that the handling of this appellant’s appeal has certainly not been as timely as the Agency should deliver and that this Veteran deserves. Unfortunately, the volume of the appeals workload has impacted VA’s ability to provide decisions in a more expedited fashion.” (Exhibit 1, Point IV). Further, the AVSCM indicated “that while VA certainly regrets not being able to adequately handle this situation, the Agency is committed to improving its processes in an effort to provide better and world-class customer service.” Id.

World class customer service? Is this some new Ganga  OGC is smoking even I haven’t heard of that puts Maui Wowie or Mantanuska Thunderf__k to shame? Granted, all enlisted men were born at night but this reeks of  bs.

I think VBA is plagiarizing or perhaps they enlisted the writer from OIG. You know. The one who writes that drivel line ” We were unable to substantiate someone purposefully stole the 1,300 stored computers in spite of the fact that it remains unclear at this time as to their present location. We will reinventory the matter in the near future to ascertain the actual location and disposition of the missing computers and confirm substantial compliance. The VA Assistant Veterans Service Center Manager thanked us for bringing this to her attention so she won’t get busted for the same stupidity when we show up next spring.” 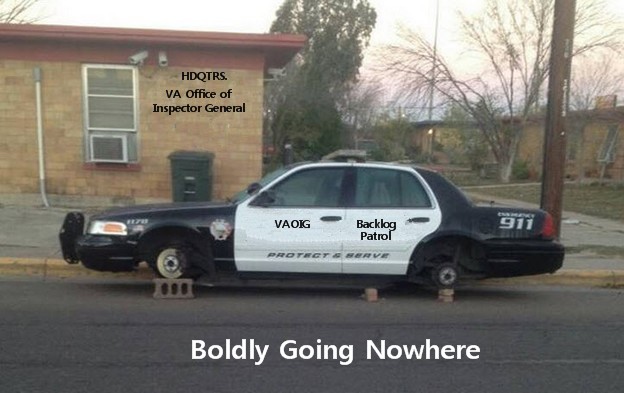 So, the teaching moment is… multiple. Extraordinary Writs of Mandamus work. The trick is to develop a documented written record of being ignored multiple times and measure the delay in the number of Christmas trees you’ve bought. Personally, with VBMS, the three-tree minimum, by rights, should be reduced to a maximum of two. VA should have to prove by the RBA that they are not suddenly trying to play catch-up in three weeks when they suddenly get a Writ query from VACO. After two years, most substantive appeals should have a SOC, be on the verge of printing or already be awaiting a VA 8 certification to the Board. Firing up the printing presses a week after receipt of the Writ should be grounds unto itself of misfeasance and constitute a de facto refusal to act. Three years is right out. It’s tantamount to a bitchslap followed by “Alright, already. I’m doooooooing it. Keep your shirt on.”

Here’s a primer in how to

For shits and grins, try this Ex Writ gig on getting your c-file. If you’re waiting and need it for your NOD or VA 9, what could be a better excuse? “Yer Kindness, I kin nay compose me disagreement ’til the blokes let me see the ‘ticulars.” If the CAVC gets inundated with enough Writs just for FOIAs, two things might happen. Judge Davis may skin me alive for putting the idea in your heads or it may speed up refilling the vacancies on the Court. My hope would be it would teach VA to be prompt and aspire to that elusive world-class service they seem so bent on achieving. Remember, no eye-rolling or sarcastic head shakes. On another note, don’t you wonder just how many red bow ties there are in existence? Does he wear one to bed? All these queshuns.

Unfortunately, as officers of the Court, we agents and attorneys are not allowed to file Ex Writs until those magic three years have expired. We are prevented by the “frivolous” clause. But that doesn’t prevent you who do have legal counsel from wandering off the reservation unattended and ignorantly filing Ex Writs pro se. Your rep. can feign ignorance and be blameless while still exerting immense pressure on VA to FOIA up the documents. Hey. What can I say? It works.