BACK IN THE SADDLE AGAIN-HADIT RADIO SHOW

I arrived home with a rip-snorting killer cold but avoided doing the Typhoid Mary syndrome in San Antonio at the conference. We’ll talk all about that Thursday afternoon at 1600 Hrs Left Coast Liberal Local time or 1900 for those unfortunate souls condemned to live in the east.

However, I feel obligated to say that I was devastated to find out Vermonters carry such a huge burden of guilt that they feel obligated to drag everyone else down with them. We give old Bernie Sanders a pass because he’s an avowed “Independent”, but what of Vermont Senator Mary Ann Carlson (D)? Vermont, you may remember, is one of the states where you are not required to have a concealed weapons permit-ergo, you may go out in public armed with no prior supervision. Wonder of wonders, this has not resulted in widespread bloodshed over the last 250 years of the state’s existence.  I always respected Vermont for that consideration that we are all born without original sin. Turns out that’s all a façade for the media, apparently. 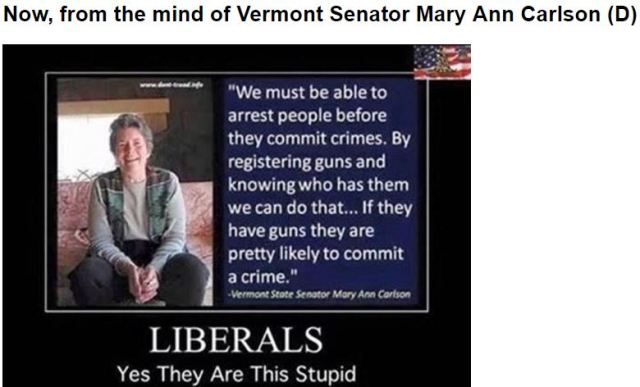 (Rebutted by a Snopes link.)

Being apolitical, I won’t go into a diatribe other than to say I am a Patron Member of the NRA. My father signed me up for a life membership when I was born. A farthinker he was, yesssssssssssssssss. Besides, regardless of Sen. Carlson’s contentions otherwise, I expect she said something a might similar. Hell, we may even find out she’s part Native American in the coming years.

Thursday’s show will touch on all the new techniques we agents and attorneys learned this spring on how to win claims quickly, how to navigate around all the new ploys to make us wait and especially how to speed up receipt of claims files.

The call in number is the same

To speak or join in the discussion, dial the number #1. Be there or be square. As usual, your Hadit greeter will be that lusty-sounding British gal with the throaty voice…

Remind me to introduce you to some of  Cupcake’s new friends I met  in Roswell.

2 Responses to BACK IN THE SADDLE AGAIN-HADIT RADIO SHOW