Tomorrow afternoon here on the Left Coast at 1600 Local or 1900 Hrs for you on the Easterly portion of the U.S., Jerrel Cook and the Hadit family will once again be allowing me to discourse on the pros and cons of VA jurisprudence.

Nothing gives me greater pleasure than to eviscerate and excoriate the VA’s abominable practice of bait and switch justice. Calling this processs ex parte in nature is a masterpiece of understatement. Here’s the most definitive definition of it I’ve read…

Imagine a small claims court where you got up and said “I’m innocent, your honor.” The Court agrees to take a short recess and study the credibility of this new evidence.  Next, imagine the judge/jury suddenly reconvening and allowing the VA’s prosecutor to stand up and introduce one falsehood after another while you’re in the restroom. When you return from your ablutions, you discover you’ve been tried and convicted and it’s over. All the protesting in the world is to no avail. You attempt to introduce new evidence showing your innocence but the die is inexorably cast. And, let me add, you are not permitted any true legal help you can hire for money that might have been of use. You do this on your own sans law dogs. How does that ex parte shit sound now, bubba?

You have one shot at an appeal. Again, still unfamiliar with the rules, you continue to use your free “legal help” from ________________[enter VSO here] and they stand by as a Veterans Law Judge is forced to rule on what you have brought to the table (nothing). If it isn’t the proper kind of medical evidence which would support your claim, you lose again. Ex Parte, bro. But you got your day in Court, huh. Finally, with only one option left, you appeal to the Court of Veterans Appeals with a free (pro bono) attorney and they school you in what you just went through (and why) and desperately try to find fault with some  case or controversy element. 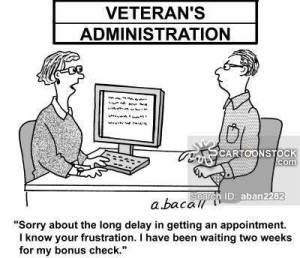 Ex parte justice prevents you from confronting your accuser and rebutting his testimony in real time. This is what prolongs the process for years-decades in some cases like mine. Tomorrow, we’ll study the one sure-fire method to combat this inequity as it occurs with the Decision Review Hearing. They say a picture is worth a thousand words. I’d go one step further and say a live face-to-face hearing is equally effective in convincing a chowderhead GS-13 VA rater (“coach”as they prefer to to be called) of the reality of military protocols and how that world operates. Like when the word doctor on your firebase meant PFC “Doctor” Pascale Camponelli, your FNG 91Alpha medic with 61 days in-country-when you got there.

I have had three of these experiences regarding my claims and have sat in as a “helper” on several others. My first, in October 1990, was before they were called DRO hearings. The rater who had denied me heard my plea and turned a deaf ear in spite of new evidence which could have been considered §3.156(c) evidence (§3.400(q) in those days). I was a babe in the woods and my DAV rep. sat there like a bump on a log. I’m one for three at this personally and have learned a lot in the interim. Nowadays, I prefer the 45-day Extraordinary Writ of Mandamus as the go-to tool for immediate gratification. Hearings should always be a prewin with N&M Evidence you arrive with. Don’t ask for a hearing if you’re out of hand grenades.

I wasn’t always a fan of these hearings prior to the insurmountable backlog we now have at the Board of Veterans Appeals. It pays to have an open mind and be willing to change your game plan if it can mean a win in 2017 rather than a docket that won’t be heard until 2021. Our finances and life circumstances sometimes don’t permit that extravagance.

We’ll discuss the pros and cons of hearings conducted “on-the-record” as well as off, asking for transcriptions, taking in your own recording devices and more. If you are new to this and have questions, I urge you to call in and ask them. This is your necktie party so you deserve to know the rules. From my experiences, it’s patently obvious your Service representative from your VSO is not going to be forthcoming or a font of useful information. Remember, his Congressional Charter compels him to assist the VA-not you. That casts an entirely new meaning on the term “free” legal help they offer.  Did you know you can ask the Hearing Officer to provide a VA physician to visually examine you at the hearing and read his observations of your appearance into the record on the spot? This can be the big ticket winner if you’re denied and it goes to the BVA or CAVC. Were you aware that you can request the Decision Review Officer divulge what he would require from you in the form of evidence or testimony that would force him to grant your claim(s)? That little gimmick alone is like bringing a gun to a rocks/paper/scissors game but no VSO will ever speak up and ask for such enlightenment.

I hope to help a few of you tomorrow reach success sooner rather than later and avoid the distasteful wait of several more years to accomplish something so obvious it’s a no-brainer. DROs are dense but rest assured their ‘if…then…’ logic circuits come to life if you connect the dots for them. VA’s M 21 1MR simply teaches them how to deny. You can politely provide them with a path to a grant when given the opportunity of a hearing. Honey, not vinegar, attracts bees so be respectful.

The call in number is still the same…

The young lady who answers still has that thick, ungodly British accent because an English outfit owns Blogtawk radio. I have no control over that facet. She could be from one of those third world countries with an indecypherable dialect so don’t complain.

Dial one (1, un, nung, môt) afterwards during the show at any time if you wish to ask a question. This is your show, developed for you-Joe and Jane Vet- and is designed to help you win-sooner rather than later. Jerrel doesn’t charge for advice but Asknod Inc. does charge for winning it (when hired) after your VSO turns it into Hamburger Helper™. I’d much prefer to teach you how to do it yourself and save you the money but for those who are “differently abled” there’s always that alternative path to success if all else fails.

This just in -Aliens nab DRO walking his dog.