Over the course of several clients’ claims, I have been forced to “take it up a notch”. One technique is to use homelessness as a tool to invigorate the VARO’s response time on claims. We all know it can be as much as several years trying to extract a Statement of the Case (SOC), certify a claim for appeal (issue the Form 8) or simply get a DRO hearing. All the recent VBMS hoopla about speeding up this process seems to die after that magic 125-day window promised us called the Fully Developed Claims process (FDC).

Even if you present evidence of homelessness or emergent medical situations that are dire health issues, VA often will dissemble and procrastinate without sufficient prodding. I want to share some of the newer ways they do this that are not as apparent as they seem. Most, but not all, are common on appeals so keep your eyes peeled for them

First, if you present new and material evidence of a secondary disease that is directly linked to your current filing in a Notice of Disagreement (NOD), VA may tell you to file it as a new claim. In some cases, this might make sense. However, if you have peripheral neuropathy (PN) of the extremities and already have a claim in for Diabetes Mellitis II, VA is required by law to view your claim from every angle.  This automatically means they should spot any records for the PN and file the PN claim for you. If you included medical records diagnosing you with the PN simultaneously with the claim for the DM II, by law they are required to develop your claim considering the PN and incorporate it as a secondary with no request from you. They can do this without you refiling for it. VA doctors and examiners are well aware of the correlation between PN and DM II. They are trained to do this without any prompting on your part. If they do ask for a separate filing, it is merely a delaying action or unadulterated stupidity. Granted, VA raters are not the sharpest tools in the shed but after a century of doing this, one would think they’ve ironed out all the wrinkles.

Another tried and true technique, and one with some validity, is the NOD with a Clear and Unmistakable Error (CUE) add-on. Let’s say you filed for an increase on the DM II because you are now using insulin and have been for several years. VA usually grants this at 20% if you’re actively using insulin. Knowledgeable Veterans or their legal beagles know that a doctor’s restrictions on diet or exercise will result in the higher 40% rating. If that information was included in the original filing, we can only surmise VA purposefully overlooked it when we open the Big Brown Envelope (BBE in hadit.com parlance) and discover they gave us 20% effective on the date we filed for the increase. This creates a two-year delay in most cases to get the 40% we were legitimately entitled to. Now for the CUE quirk. If you throw in a CUE saying you are legitimately entitled to the 20% (or 40%) a year earlier than your filing for the increase (which you are), VA will divorce the two “contentions” and begin a totally new CUE claim which most definitely will not be part and parcel of the request for the increase. CUE claims are not treated as FDCs so it will be several years in most cases before they mail you the revised decision. Meanwhile they will proceed with the NOD issues in a separate appeal. Idiot’s delight and to your detriment.

Most of us who do VA claims understand that when VA raters have the c-file open, it makes sense to adjudicate any and all contentions and make the most efficient use of their time. We only have one claim in VA’s eyes. It may have different facets but there is still only one legal claims filing. This is why, back in the “olden days”, we filled out the 21-526 one time at the very beginning. VA harvested all our info to include spouses, dependents, active and reserve time, pension viability based on service in war, et cetera. The document was 26 pages long hence the “26” in 526. Any claims after that were done on a VAF 21-4138. Thus, when you filed for the DM II at the outset, you had to provide adequate evidence of the disease and the degree of severity to be granted the claim in the first place. If you had that information present in the original filing and VA purposefully underrated you, it was CUE. Correcting this CUE at the time of the request for an increase to 20% or 40% should not require a separate decision path bifurcated from that request. It merely requires a more nuanced inspection of the file and a simple correction to make it right.

VA will insist they cannot do this but we know differently. When I filed my Extraordinary Writ of Mandamus January 2, 2015, VA managed to “fix” my CUEs (plural) in 45 days and grant me my SMC S all the way back to 1994 as they should have done contemporaneously. They also granted me equitable tolling of my SOC in 2010 to permit it. They also restored the 10% “clawback” for my porphyria cutanea tarda skin condition which they had reduced to 0% in lieu of the 40% grant for phlebotomies. Without going into the minutiae of the decision, the salient teaching moment here is VA can do whatever they want to conversely proportional to  how much pressure is exerted from on high to correct the error right f—–g now (RFN). In my book, 45 days is definitely RFN and clear as well as unmistakable evidence that VA can do anything they want to in as little time as it takes for the OGC to pick up the phone, call the VARO director and tell him to issue the rating- and be quick about it. This is the new tool we were handed by Secretary Bob two years ago.

Another technique, but certainly not the last of their delay and deny tactics to throw sand in the gears, is the worst and one they have only recently discovered when they need more time to fix something horrendous. Butch Long’s claim for an earlier effective date, filed with his NOD this July, prompted this little gem. VA generally sends you the 21-4142 and the 4142a in the preliminary stages if you have not sent in any medical info regarding your filing. This automatically disqualifies you from the FDC expedited process as we know. But what happens when you’ve already sent in every last medical record in existence regarding your condition and diagnosis? What could possibly be the rationale for the raters to ask for more medical records on appeal? Well, folks, look at the VAF 21-4142 below and read what’s in the red circled area. 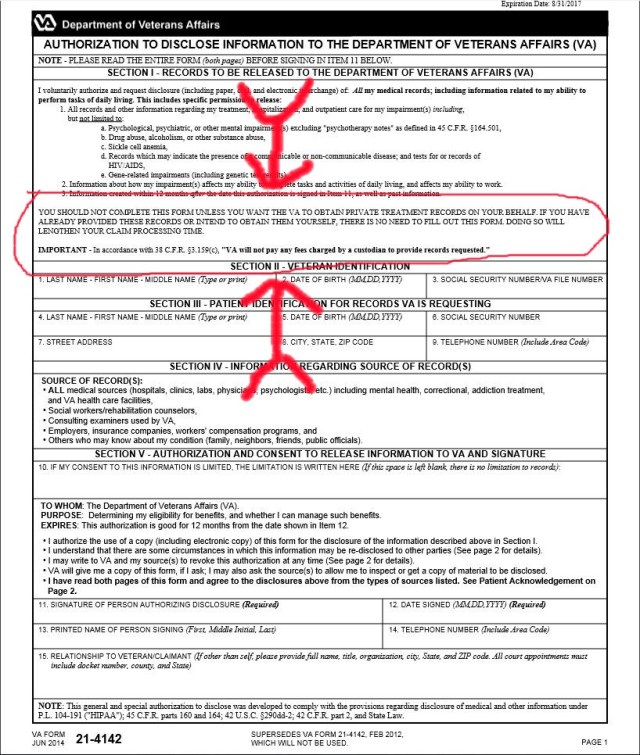 Below the primary admonition is the codicil stating VA will not pay for the records. I do not know how many Vets I’ve helped tell me they identified all the records for VA. They assumed VA fetched them. When I get the c-file, nary a record is there which was essential to proving the claim. I guess I don’t need to tell you this is all the more reason never to allow or expect VA will obtain what’s needed to win. In the brave new world of Obamacare, virtually every medical provider is charging for a paperclip-let alone your records. You, by law, are entitled to them for free. Not so VA. VA is not required to tell you they had zero success on fetching said records either. The only way you’ll ever know is to obtain the c-file to discover the problem.

In Butch Long’s case, they know full well they have any and all records, including everything from the local VAMC on him. I can only surmise the reason the Appeals Team sent me the 4142/4142a was a stunt to begin a whole new search for something they know full well doesn’t exist to gain time. In numerous filing of evidence on this claim, any and all records have been submitted and statements to that effect have been included. VA went even further and refused to x ray his left hand for the 2015 C&P- in spite of his filing for it in 1970. In further correspondence, they stated Butch has not supplied them with any evidence he has retained foreign objects from the SFW in the left hand. He clearly stated it in the Court Martial documents which seems to point to gross error-i.e. even more CUE.

What is clear is that VA will resort to any ploy to dawdle and delay the inevitable. Any time VA contacts you or your attorney during the course of the claim or the appeals process, be wary of what they ask for. Be even more wary of what you sign or give them permission to obtain. I have strongly advocated that Vets only give VA that which is pertinent to the claim(s) at hand. There is no need to supply them with your mental health records if you’re filing for DM II or PN. It has no bearing on those claims and could hold up your adjudication for months or years. There certainly is no law against holding back anything that has no identifiable purpose to the claim(s) at hand. I call that VA fishing for detrimental evidence-something they are clearly not permitted to do.

Make it so numbah one.