What in the Sam Hill is an inferred claim? Who dreamed up that Fustercluck concept? I get more queries on that since the VA term became fashionable. Included in these Veterans’ follow-on sentences are usually phrases like “I think they done deemed denied me!” and a nuanced discussion about how they got hornswoggled out of an earlier effective date. Let’s investigate this.

Here are several great legal discussions about it. You can find these at the CAVC site.

Criswell v. Nicholson, 20 Vet.App. 501, 504 (2006) opened the door to the concept that VA sometimes disremembered to do its job at the RO. They concluded with the misguided idea that it was okay most of the time. I personally think that makes nonadversarial a good descriptive adverb for a sidewinder, too.

Cogburn v. Shinseki, 24 Vet.App. 205, 214-15 (2010) Cogburn set 4 tests to see if it was inferred, informal or infernal or still viable. Cogburn took into account whether you had DAV as your legal team(i.e. unrepresented). Taking advantage of pro se Vets is so gauche.

In Richardson v. Nicholson, this Court held that, when presented with an assertion that VA failed to adjudicate a reasonably raised claim in the context of CUE, VA must make two threshold factual determinations:

(1) Whether such a claim was reasonably raised based upon a full and sympathetic reading of the pro se appellant’s prior submissions; and if so,

(2) whether the claim remains pending or was adjudicated.

Specifically, the Court in Richardson clarified that the Board should first give a full and sympathetic reading of the [pro se] appellant’s filings to determine whether a claim was reasonably raised.  If the Board determines that a claim was reasonably raised and was not adjudicated, then it remains pending and must be remanded to the RO for adjudication.  If the Board “determines that the claim was adjudicated, then the claimant may collaterally attack the resulting decision on the basis of CUE.”

(a) Any communication or action, indicating an intent to apply for one or more benefits under the laws administered by the Department of Veterans Affairs, from a claimant, his or her duly authorized representative, a Member of Congress, or some person acting as next friend of a claimant who is not sui juris may be considered an informal claim. Such informal claim must identify the benefit sought. Upon receipt of an informal claim, if a formal claim has not been filed, an application form will be forwarded to the claimant for execution. If received within 1 year from the date it was sent to the claimant, it will be considered filed as of the date of receipt of the informal claim.

§ 3.157 Report of examination or hospitalization as claim for increase or to reopen.

(a) General. Effective date of pension or compensation benefits, if otherwise in order, will be the date of receipt of a claim or the date when entitlement arose, whichever is the later. A report of examination or hospitalization which meets the requirements of this section will be accepted as an informal claim for benefits under an existing law or for benefits under a liberalizing law or Department of Veterans Affairs issue, if the report relates to a disability which may establish entitlement. Acceptance of a report of examination or treatment as a claim for increase or to reopen is subject to the requirements of § 3.114 with respect to action on Department of Veterans Affairs initiative or at the request of the claimant and the payment of retroactive benefits from the date of the report or for a period of 1 year prior to the date of receipt of the report.

This touches on the reason why we end up with “reasonably raised”,  implied or inferred claims. You show up in 1970 and the doctors says “Whoa, that satchel charge toasted your ear, dude” You, of course say “What was that? Oh, you mean my hearing? I didn’t know it was that bad. Maybe I should file.” In most cases, that was  the end of the claim- be it new or a reopen- unless you personally acted. Expecting VA to quickly send out the twenty six page 21-526 to your last known address just wasn’t in the cards regardless of what they said. The Catch 22 that always let them off on this was a two-part trick. Pulling the pin didn’t start the clock. Pickling the bail and throwing it at them did. You had one year. If VA hadn’t sent you any filing papers by then, it wasn’t their fault. Read the rules book. Ignorance is not bliss.

Thus, in 2015, the old lady says you are soooooo deaf so you refile for hearing loss. You win but it’s eerily like what you filed for in 1970-sort off. You said your ears rang a lot in 1970 and they blew you off. They gave you 0% for “deafness”. You reopen for it this time and call it tinnitus. Bingo!-10%.  Before you filed this time, if you were smart, you got the old c-file and noted that you filed for it just like you thought you did. You told them about the ear ring. They wrote it down. The doctor even mentioned it by name in the C&P report. They just sort of let it slide because you didn’t actually call it tinnitus. Well, that’s what VA is going to argue. No way are they going to talk about 1970, cowboy. So how do we turn this into an “inferred” or reasonably raised claim? Watch closely, young Skywalker. The c-file is quicker than the eyesaber. VA was sooooo dumb back then that they actually wrote it down. Too late to erase it when you get your c-file BEFORE you file. Some would say this cost old Butch Long 10 months of benefits. I say it gained him 46 years of a lot of retroactive baksheesh.

Evidence is king. I tell you that over and over. You construct it like a concrete foundation. All the documents below are originals. Left clicking on them will magnify them for you. Left clicking on them twice will really magnify them for those of you who are blind like us old farts. You have to begin with an entry physical showing good hearing when you went in. Like this: 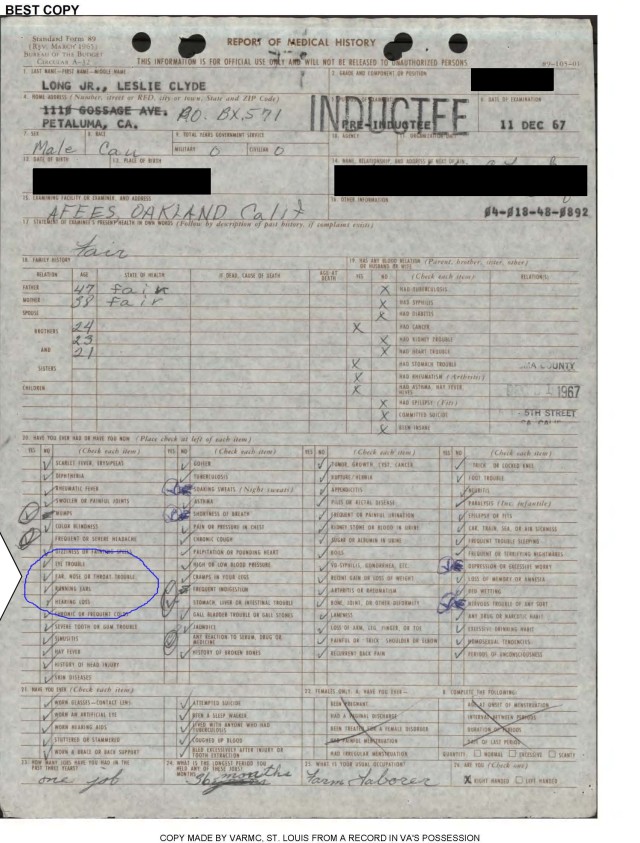 Okay, now you have proved you arrived with two good ears. That is the Presumption of Soundness. Next, you have an exit physical that implies things got a little bunged up in between: 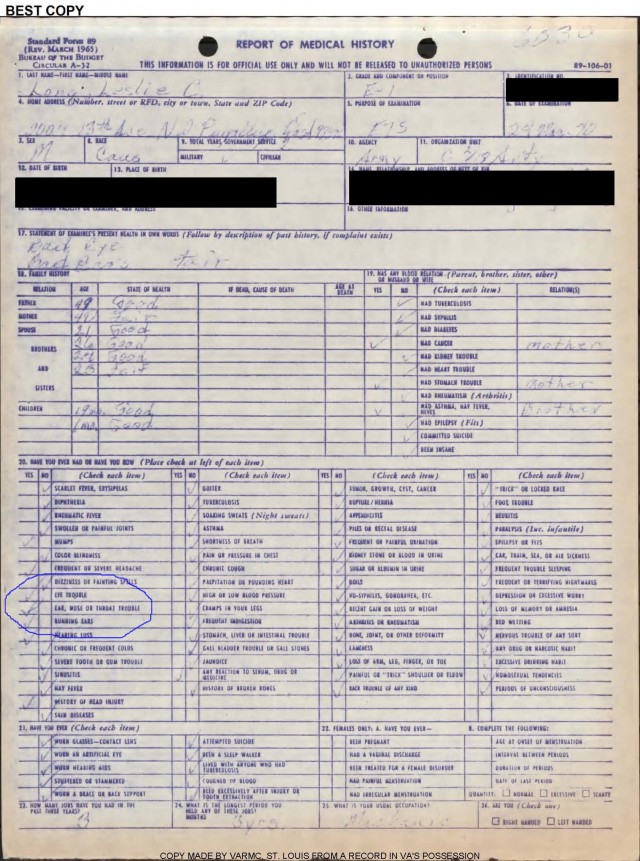 Throw in the filing for the claim. Remember, you don’t have to be anally retentive with the terminology. You told them you had too many holes in your ears and eyes and weighed substantially more than you did when you went in due to you’re packing all that extra steel. Throw in a mention that the Homeland Security guys at the airport get mighty excited after you walk through the metal detector. They always want to see you naked after that.

Throw in a C&P Examination showing you complained about that funny ringing sound and all the pus oozing out. While you’re at it, throw in the bogus right eyeball and the right  hand and head wound/headaches. Pretty soon it looks like you were filing for TBI. Wait… you were, but you just didn’t know how to do it back then.

Throw in the stupid VA doctor who slipped up and mentioned tinnitus and a future cataract (incipient lens change). See where we’re going with this?

Refile in March 2015 and wait for VA to tell you your effective date is… March 2015. This is when you break the bad news to them that your effective date is controlled by your- yep, wait or it-  inferred or “reasonably raised” claim. You ate the satchel charge. You said your ears rang all the time and the doctor said it was tinnitus. You were rated 0% for deafness. It isn’t your fault they forgot to rate all of it. You asked for it and you’ve been patient. They finally grant it and you spring the  1970 trap.

That’s how you are supposed to “infer” a claim in VAland. This is really what we call an informal claim in it’s truest sense for the Tinnitus. This is also an example of your filing for it and complaining in the only tinnitus language you understood (ringing). You were not a doctor. If a satchel charge went off about a foot away from you, it was called concussive blast injury. They call it acoustical trauma nowadays and give you TBI, bent brain, bent ears and a lot more-including tinnitus. In 1970, they called it 0% for deafness. We’ve come a long way semantically, baby.

Now, when you file your Form 21-0958, you can say legitimately “Dude, what happened to my tinnitus rating from 1970? Or my right side head wound with retained shell fragments? Or the incipient cataract that eventually formed over my right eye owie? Or the right hand that goes numb after about an hour or two of work every day? Huh? When are you going to rate them?  When you ate that much Semtex, they were supposed to start thinking of the bigger picture. If they didn’t, you wait them out like Butch did. It ain’t over until Butch says it is. All those retained shell fragments are still there. VA can bullshit you but they can’t bullshit the retained metal fragments out of you.

This reminds me of herding ADHD cats. They just can’t seem to stay on track but think you’re stupid enough not to notice or add it up yourself. 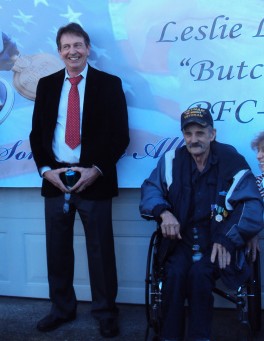 Butch and me at his Valentine’s day bash