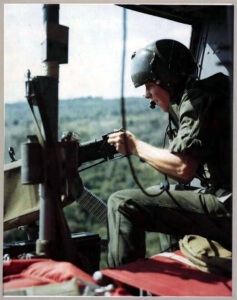 A Huey door gunner wakes up at the 312th Air Evac. surgical ward in Chu Lai late one night. He’s in great pain and sees a lot of tubes and medical gear over his head. He vaguely remembers the pilot yelling “B 40 incoming! Hold on!” You also know the feeling when your stomach tells you the rotors are no longer pulling pitch and the jungle canopy is rushing up to meet you. He carefully raises his head and looks down to survey what’s still there and slowly lies back with a sigh. It appears a wheel chair is going to be a big part of his new life. The monitor starts to beep.

A gorgeous young Butterbar nurse notices the movement and comes over to check on him. She carefully leans in close, turns off the alarm and makes eye contact with him.  Slowly, she repeats  “Hiiiiii, there. You…may…not…feel…any…thing…from…the waist…down.” 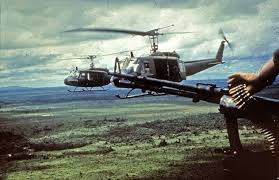 His eyebrows rise slightly as he struggles up on the gurney. His gaze breaks from her eyes down to her chest. In a low, measured voice he urgently mumbles into her ear through the Demerol haze “Can… I…feel…your…tits…then?”

Humor aside. American nurses in Vietnam were something to behold. Their GI name was “a round eye nurse”.

And here are some who served in country.

As a last rejoinder, I’ll add this. When I wrote the joke, I had forgotten about the B 40s that hit the 312th and killed Lt. Sharon Lane. She was a bright light in a dark era of medicine in Vietnam. It happened a year before I arrived.