For scores of years, and certainly for as long as the post-1988 modern iteration of the VA as we now know it,  some interpretations of the VA’s regulations have been granted ‘deference’ if I can convey that politely and sarcastically simultaneously. In Veterans’ parlance, ‘deference’ means the USS Nonadversarial sailed without you. What appeared to be a level playing field was suddenly discovered to have a yawning chasm indiscernible to the naked legal eye. The chasm was so large as to be impassible. In Veteran parlance, we too have a name for it-the Thursday rules. Rule #1: If you weren’t born on Thursday, you don’t qualify for this special program. Rule #2, If, by a fluke, you can prove you were indeed born on a Thursday, Rule #1 is then for default application.

A statute, 38 USC § 1155, was clearly phrased in the plural when enacted by Congress. We don’t need to repave the legal highway and bore you with legal tomes that presume Congress consisted of some pretty fart smellers back then and it’s presumed they knew what they were doing. Suffice it to say § 1155 was pretty clear to all except the few, and I do mean a select few entrusted with apportioning it out. Guess whoooo?

For the uninitiated, here’s the statute which is law-not everyday guidance.

The Secretary shall adopt and apply a schedule of ratings of reductions in earning capacity from specific injuries or combination of injuries. The ratings shall be based, as far as practicable, upon the average impairments of earning capacity resulting from such injuries in civil occupations. The schedule shall be constructed so as to provide ten grades of disability and no more, upon which payments of compensation shall be based, namely, 10 percent, 20 percent, 30 percent, 40 percent, 50 percent, 60 percent, 70 percent, 80 percent, 90 percent, and total, 100 percent. The Secretary shall from time to time readjust this schedule of ratings in accordance with experience. However, in no event shall such a readjustment in the rating schedule cause a veteran’s disability rating in effect on the effective date of the readjustment to be reduced unless an improvement in the veteran’s disability is shown to have occurred.

I  highlight, underline and bold the pluralities to show you how ludicrous the DVA’s rebuttal argument is that § 1155 clearly intended that each individual disability-all by itself-isolated if you will from any other service-connected ailment, be microscopically considered for Extraschedular Ratings. And here’s the added VA kicker, the BVA insists combining them together was not permitted. Each disease/injury had to be viewed apart from the combination as a whole for it’s added ‘impact’.

The VA Secretary wisely arrogated this valuable and lucrative contravening of the ratings scheme to a select few. The Director of Compensation and Pension Service and honorable Under Secretary of Benefits, currently Allison B. Hickey, are the few described in 38 CFR 3.321(b)(1):

(1) Compensation. Ratings shall be based as far as practicable, upon the average impairments of earning capacity with the additional proviso that the Secretary shall from time to time readjust this schedule of ratings in accordance with experience. To accord justice, therefore, to the exceptional case where the schedular evaluations are found to be inadequate, the Under Secretary for Benefits or the Director, Compensation and Pension Service, upon field station submission, is authorized to approve on the basis of the criteria set forth in this paragraph…

an extra-schedular evaluation commensurate with the average earning capacity impairment due exclusively to the service-connected disability or disabilities.

The governing norm in these exceptional cases is: A finding that the case presents such an exceptional or unusual disability picture with such related factors as marked interference with employment or frequent periods of hospitalization as to render impractical the application of the regular schedular standards.

Again, seems innocuous as a handful of potato bugs or a daddy long legs on your face. How did this regulation metamorphose into a knock down, drag out fight over the semantics of one absolutely unambiguous phrase:

The governing norm in these exceptional cases is: A finding that the case presents such an exceptional or unusual disability picture… 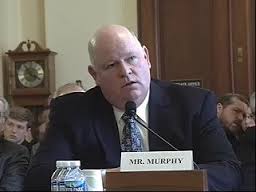 Former upper management at Home Depot. 21 years as a weekend warrior. A ‘company man’ and the other duly appointed guardian of Extra-schedular ratings

Tom Murphy (director of Comp. & Pen.) and his merry krewe have chosen to join Custer and his brave band and die on that hill as well. That the phrase “disability picture” is singular and not plural  is the main tenet of their argument. The fallback, Gorrilla Glue ®, last line of defense is that 38 CFR § 4.16 (TDIU) clearly supports it. Idiot’s delight. If the Federal Circus finds our argument is bogus and indefensible (which we already know it is), then we’ll fall back on yet another regulation (not statute) to defend the injustice. Nowhere in the argument is there a reasoned argument for this tortured interpretation based on statute.

What about the CAVC?

Just so. What about the CAVC? How in hell did this escape them? They thought it of such import they convened no less than an en banc Court of eight to consider the implications. Then they promptly threw in the towel and gave the VASEC a pass on it without any introspection.

What ensued from that decision is so clearly in error as to be indefensible and the Federales said as much. This, fellow Veterans is what the focus of justice should be directed to. What possible reason could any majority of the en banc CAVC hang its’ hat on to defend this? A tortured interpretation arrived at by pandering to the DVA and going along with it? If the reason is simply to grant deference to an ambiguity, then show us the ambiguity. There is none and that is what should make your hair stand on end. Kasold pointed it out in great detail in his dissent and it became the gist for the Federal circuit reversal-almost chapter and verse.

Everyone with an ounce of legal sense should wake up and take notice. The author of the en banc decision was none other than whom many of us had come to think of as a Veteran-friendly judge (Schoelen). Conversely, Chief Judge Bruce Kasold, admittedly the most onerous and least Veteran-friendly, dissented and was joined by Davis and Bartley. We expected Meg to come down on our side but this decision  is warped beyond credible belief for the lineup of the players alone. How often are you going to see Bruce and Meg play house together with or without Davis?

Johnson, in Schoelen’s and the other five judges eyes, didn’t have a pot to piss in  or a window to throw it out of. They even strayed off the reservation in search of this epiphany, in of all places, the M21-1MR. What was simply constructed long ago as a How-To instructional manual of how to rate claims, the modern M21 is carefully infused with many little fenced-in areas. Ingress to service connection is limited at every turn with an “except in cases of…”. I submit in this case that it was a mere surrender of any semblance of judicial interest in favor of a disturbingly “far reach” of English to lasso in the singularity of the definition of “disabilities”. It is so glaringly bereft of precedence to depend on that it merely turns on the whim of six judges too lazy to read 38 USC §1155 and intuit the clear implication of plurality. This smacks of the “Predestined Interpretation” theory espoused by Henry Campbell Black. Ben Krause made a great analogy to it in his recent article about fixing this uncanny 85% predilection for Vets’ denials down at the RO and BVA level. Too bad he didn’t consider the implication that this is a far bigger Dog and Pony show than even he conceived of. How else would (or should) we Joe Average Vets interpret it? When examined in the light of all the other VA intransigence, disinformation and obfuscation, and the VAMC dishonesty, finding out an extra-schedular rating scam was afoot should not be cause for alarm. It should be expected. Additionally, finding out that it was abrogates yet another presumption of regularity. At what point does this whole presumption gig collapse for lack of evidence it exists?

This wasn’t even a brain teaser for the Feds. At nine pages, it is a remarkably short-winded rebuke of the CAVC, and by extension, the whole DVA adjudications/regulations/interpretations schematic with an “s” after each noun. Much like the overlooked clear meaning of 38 CFR §3.303(b) that was “misconstrued” in Walker v. Shinseki last year, Johnson unmasks yet again the impression that the DVA is unaware of what it is about. Walker will now permit thousands of decisions to be CUE’d by VA themselves and reduce erroneous grants. Similarly, for years we have been sandbagged by an equally narrow minded interpretation of how extra-schedular determinations are determined. Mr. Johnson just brought it to the fore and with the help of Ken the Carpenter, they finally discovered the meaning of what ‘disabilities’ is (are?)

I suspect the barriers to getting this valuable consideration will take time to rend asunder. As with all VA bureaucracies, The Tomster and Allison are going to have to stand shoulder to shoulder to staunch the influx of now-legitimate claims and will not go willingly into the night without a few more discussions about what the meaning of “is” is. Oh and as for CUE on all those old Extraschedular decisions for the last 25 years? Thursday Rule, dude.

The most telling bitchslap was left for last, too:

Given the intention of the regulation [38 CFR §3.321(b)(1)/38 USC § 1155], the government’s argument that the consideration of the need for extra-schedular review should occur by evaluating each disability individually, without considering the impact on a Veteran of his or her collective disability picture seems difficult to defend. In Veteranspeak, that’s abbreviated as WTF. Over?

Seems if anyone had read 38 CFR § 4.25, the ratings table, they would have noticed it discusses the cumulative effect of a number of different illnesses/injuries and contravenes the whole argument put forth to defend § 3.321(b)(1) espoused in Johnson. Regardless, all’s well that ends well. I wonder how many more aeons we’re going to suffer this warped ‘predestined misinterpretation’ nonsense.