This morning I heard Ronald McDonald had been formally crowned the new VA Secretary. This is an interesting development and one that has direct, if not dire, implications for Vetkind. How he approaches some of the old, intractable warlords in upper management and how hard a hand of poker he plays will tell us all we need to know soon. There’s no time to learn the ropes and start sanding off the peeling varnish of the USS Vermont Ave. (VBA-810). His new motto should be ” We jump from 8,000 at dawn.” Of course, an equally apt one would be “Boldly going somewhere finally “.

Make no mistake about it. Reforms are going to have to come hard and fast. New revelations about retribution to whistleblowers at Palo Alto is all over the news. VA is making no pretense or even trying to disguise their actions. It’s like the Red Queen running amok at the afternoon garden tea party screaming “Off with their heads!” In fact, the sugar baby responsible for trying to hang the VA whistleblowers in the pharmacy there was transferred to Phoenix as Sharon Helman’s replacement.  TA-DA! Yeppers, Elizabeth (Lisa) Joyce Freeman, who served as director of the Palo Alto VA Health Care System until she left this month to become interim director of the VA’s Southwest Health Care Network in Arizona was the Red Queen. 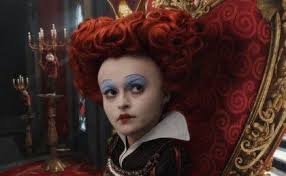 They just really don’t get it. Witness Lucy Filipov having to Chieu Hoi last week up in Philadelphia and Diana Reubens taking a demotion to replace her. You eventually realize this musical chairs game is nothing more than a desperate rearrangement of the same old furniture on the aft deck of the Titanic.

This one has to change. The idea of creating a new file on the VA claims  ”desktop” (read in basket), filling it full of partially completed claims and then walking away from them without finishing them does not reduce the backlog. You can take them off the official “roles” of claims awaiting action, but you have not done anymore than make another mess that will eventually have to be cleaned up. Whether our new VA Clown will even scratch the surface of all this or go the protein pill/ helmet route is of burning interest. Does he have the cojones? Another Hispanican standoff is not going to pass muster with Uncle Jeff and the crew in HVAC. 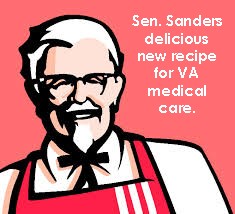 How it plays out with the Col. Sanders show up in the Senate is still fuzzy in my magic eight ball. If they can’t even agree on how to fix our medical care without a fire hose of billions and billions, why bother? Perhaps integrating us into the new ACA would work. Not. The private medical system is now slowing down (as predicted) to dial-up internet speed with the massive influx of new Medicaid enrollees. Adding Vets in equally mass quantities will produce more and more of the same tortuous gridlock.

The Senate cares not if they overburden the budget. What the hey? Here, take another Elevendybillion for VHA. Just make sure you build some of them new hospitals in my state. Hear? The House, desperate to triage our public debt, is demanding offsets in all the public welfare programs to balance this added expense. Guess who gets the short straw? Legislative impasse once again paralyzes our system and nothing happens. 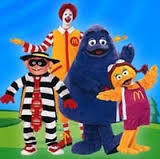 Coming soon to a VAMC or VARO near you.

The new Bozo could have all the best intentions in the world but if Congress does nothing, the McDonaldmeister and his new, improved management team is going to be pissing into the wind to fix anything. Based on all organizations ever a part of government, you can expect a waste/fraud/redundancy factor of 37%. If Old Ronnie could squeeze this out of existing union/management and hire more Native Americans instead of Chiefs, he might make headway in spite of a recalcitrant, balky Congress. It would certainly be a good head start to begin paying  entry-level bedpan changers $15 an hour rather than $45.  Throw in some of that much-touted VA medical care, too. That ought to increase the “shareholder” mentality of VA employees.

As a postscript, it’s quite telling when the Big Six VSOs want to keep the same old VAMC model and touch up the paint. Of course, them fellers don’t have to use it. They have the new ACA or their own gold-plated plans.