VASEC–PLEASE ALLOW ME TO INTRODUCE MYSELF

I have refrained from writing about the shakeup at 810 Vermin Ave. NW in hopes of reading them bones more closely. Sure enough, the rats are jumping ship with the sage premonition that the USS Veterans Affairs is in mortal peril and slowly subsiding beneath the waves. Gone is that second spring after the 1988 Congressional Kristallnacht that baldly snatched power from them. Senator Alan Cranston’s prophetic phrase echoes once again on the pavement of Vermont Ave. NW and the REMFs are finally facing the music. They’ve never been in the spotlight. They were promised anonymity. Please, sir. May I have another bonus falls on deaf, uncaring ears.

Ronald McDonald has been tapped for this job based on little more than the typical lifer mentality of doggedly pursuing one job until you’re the last man standing-ergo the CEO. It troubles me he only held his Proctor and Gamble  King of the Mountain perch for four years. I find that telling in a tough setting of cutbacks and product revamping. A valuable CEO would be wooed to hang around for as long as the pay and the options continued to roll in.

Didn’t they read my resume? I’m a man of wealth and taste.

Does anyone find it incongruous that the new Hamburglar is a conservative right leaning guy who donated to Romney and Boehner’s campaigns? Doesn’t this smell like a setup, and, if failure occurs, it’s preordained who gets the ax? We don’t have to look much further than the scapegoat who just got clobbered for trusting his underlings. Regardless of Ric’s political leanings, he was ordered to fall on his sword. Without delving into dirty language, a certain high up political figure (elected) asked for his resignation privately and then let him grovel personally and publicly. I don’t know that I could do that. Under the circumstances, I’d take the bitchslap in public and go back to the office and start writing pink slips.

This has been a long time in coming. We welcome the dawn of exposure and the glaring media lights and microphones. It’s like Ray Kinsella (Kevin Costner) of Field of Dreams finally getting through to his brother-in-law Mark and bringing his attention to all the baseball players. This is the watershed moment… and we get Ronald McDonald. Are you kidding me? Did anyone ask Tammy Duckworth what her schedule was? There are many choices available and many viable candidates. To limit this to corporate has-beens is self-limiting. Ruling out true former military leaders simply artificially constricts the pool of eligibility. Such is politics. The FNG is always the whipping boy.

Choosing a good old boy Republican is smart politics. You get guaranteed affirmation in the Senate with no hassle. This is simply a stopgap measure until you bail out in two years so you really could give a rat’s ass what happens. Think about it? What else could go wrong that hasn’t already? This is why I find politics messy and unforgiving. Poor Mr. McDonald will end up a footnote on the ash heap of history having accomplished nothing in his two years other than to get up to speed in time to put absolutely zero reforms in place before a new administration is inaugurated. Lather. Rinse. Repeat. And much like Groundhog Day (the movie), we’re compelled to do it again and again with no hope they’ll ever get it right. 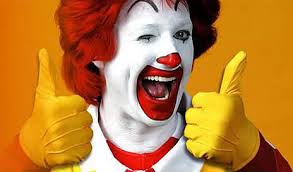 Sympathy for the Devil

I write this, as I do most all my articles, from the perspective of a Veteran. I find it more than occupies my time. It is a worthwhile cause and someone needs to make sure no one gets left behind. We are golden right now simply because we’re an injured party. Anything this administration can do to make the VA scandal go away or ameliorate it’s corrosive effects on the media is fair game. We must hold their feet to the fire. Don’t allow this story to subside. Don’t permit it to become yesterday’s news supplanted by the next earthquake in Chile.

If we do end up with the clown, we’ll have a subdued six month hiatus for realignment, rebranding, renewing, reviewing and little else. Eventually this story will fall to Page 15 and below the fold. The problems are so entrenched that a spring housecleaning simply isn’t going to remove the infestation and inbred culture that has permeated this Agency since 1920. Each and every VA Secretary in the past has sworn to change the way VA does business, They promised faster, newer, and more. They offered redder reds and whiter whites. All these promises have not even dried on the paper and we’re getting ready to be fed a new line.

3 Responses to VASEC–PLEASE ALLOW ME TO INTRODUCE MYSELF