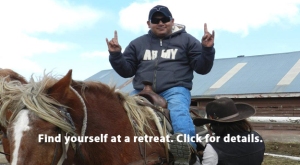 Project Sanctuary conducted ten retreats in 2011, their latest year tabulated above. That took 103 military families-Dads, Moms, and in many cases children as well, on secluded getaways where they could connect with each other, society, nature and re-acclimatize themselves to normalcy. It didn’t cost the Veterans a dime.  One of the founders, and a Registered Nurse in her own right, Heather Ehle, uses the Field of Dreams technique. If we build it, they will come. And come they do.  By word of mouth. Social networks. Veterans networks. This road map is also preparing to spread into Utah and beyond next year. Ms. Ehle isn’t certain how but that is immaterial. Retreats “happen”.

While I cannot speak for a serviceman who has fought in this most recent conflict, I can say with a small degree of memory that coming home to America after a two-year deployment occasionally involving free-fire zones takes some getting used to. You tend to sit in corners facing out. Your peripheral vision is incredible. Loud booms like cars backfiring make you hit the ground pronto. I suppose if it had been invented back in 1972, that I could have called it PTSD. The military, due to budget restraints, characterized it as a personality disorder or two and gently performed their “catch and release” policy. This effectively told me I was on my own. I lived in the Mojave desert and talked to turtles and sidewinders for a year. I went to work for a munitions factory but the occasional exploding ordnance (accidental) was not a positive mental reinforcement. Hell. It was actually more like old home week. I moved until I touched back down. Got married. Had a daughter. Got divorced. Eight years with no one to talk to about it. I was the square peg in the round hole.

Immersing yourself back into a family and the kids must be immeasurably more difficult. Mind you, I was single and didn’t have any attachments. Everyone I knew was a friend of the last six months to a year. No deposit, no return friends. It would be several years before I could even contemplate the hurtle of a commitment. With the miracle of the internet, these troops form very close friendships with their brothers-in-arms and bond for life in many cases. How these young guys and gals do it married is beyond me. Reading through the Guidestar statistics, I noticed the accolade – “Love this organization! They have helped keep families of veterans intact and so far, ZERO suicides!” That pretty much says a mouthful. To put that in perspective, since 2007 they’ve been helping troubled families not only hold their marriages together, which is no small feat in its own right, but somehow have prevented any of their alumni from winning the Lead Lollipop Award. Twenty three Veterans are daily choosing this option nationwide. Somehow, these folks in Colorado are making a major difference with the troops and avoiding this pitfall. That, too, speaks volumes.

I can’t begin to express my gratitude to those who selflessly do this for the warrior class. What’s more, to do it with little or no remuneration year-in and year-out  defies imagination. In the words of my three year old grandson when I make a quarter come out of his ear- “How did do do dat?“ 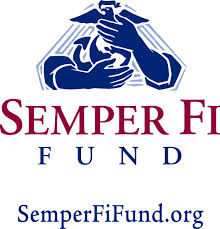 After reading through innumerable 990s and mission statements from several different charities some like the Semper Fi Fund manage to help vets effortlessly like Project Sanctuary. They even offer cash disbursements seven days a week.

Granted we can’t be like Superman and save the world everywhere all the time. We have our own Clark Kent lives and worlds to inhabit. That any of you even find the time to volunteer, to feel the urge to contribute to a disenfranchised minority, the desire to see someone less-well situated worry a little less, amazes me no end. One look in a shopping mall reveals a very new and naive young narcissistic society immersed in their mobile phone worlds.  Let’s hope this is a youthful indiscretion and that it will blow over. It has the potential to drown these kinds of endeavors.  Salute those who choose, for whatever reason, to volunteer  but take your hat is off to the truly selfless. I like charities whose mission is simple, direct and focused on a singular objective-the Veteran- or more appropriately- the endangered or at-risk Veteran.