Sometimes things I order from Amazon, perhaps a T-shirt or a kitchen towel, are tagged “Made in Vietnam.”  Here we are, decades later, and only God knows how many humans were killed during the Vietnam War, and afterward.  All that pain, suffering and death, but hey, we can now buy cheap goods from Vietnam.

“What in the world should I buy as a souvenir?”

My old Marine came home with a chess set, and a bunch of–at the time–mainly intangible illnesses and injuries.  The latter are the souvenirs he can’t throw way no matter how much we wish he could be rid of them.  When I read BVA claim decisions wherein a judge comments that, say, an older veteran wants to “blame” all of his/her ailments on their war experiences, I think “well–the vet could be correct.”  On the other hand, presenting a long list of ailments, even if correctly identified as service-connected, is not likely to be looked upon as reasonable by VA employees.  I suspect that only holistically, well-trained and smart military researchers, are capable of connecting all the dots.

How did some servicefolk spend their Sundays in Vietnam?

Shopping for deals? This artful photograph shows the important role chaplains play in the military.  What can explain this desolate landscape?  What happened here?

I see sadness in the postures of the sitting men, a few not listening and one bold fellow staring straight at the camera.  I see symbols of civilization here among the debris: the chaplain’s stole, his bible verses, and even in his reading glasses.  In this setting, the mostly uncovered heads are probably as a sign of respect.

Entitled “Sermon on the Mount,” the image represents a yearning for peace amid war and a wish to go home alive.   A brilliant and touching spiritual image to appreciate on a fall Sunday afternoon. 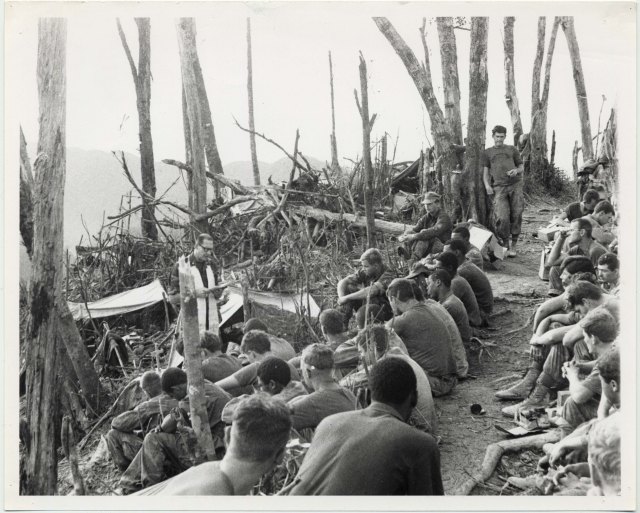 “Sermon on the Mount” “Navy Lieutenant Commander, Frederick E. Whitaker, chaplain for the Third Battalion, Fourth Marine Regiment, holds religious services for leathernecks of “M” Co., on a mountainous ridgeline north of the Rockpile. The Leathernecks were participating in a battalion-size search and clear operation near the Demilitarized Zone.” In the collection of: The New York State Military Museum and Veterans Research Center, Saratoga, NY https://dmna.ny.gov/historic/about.htm

Like Loading...
This entry was posted in All about Veterans, Food for the soul, Food for thought, Future Veterans, General Messages, Guest authors, History, Uncategorized, Vietnam War history and tagged va, Veterans, vietnam. Bookmark the permalink.