Leahy’s Twitter blurb:  “Marcelle and I and Governor Scott were with the Vice President and his wife in the Capitol Rotunda this morning for the sad occasion of the arrival of Senator John McCain’s casket.

“I am glad to hear that they are able to now visit the most beautiful state in the country, and I hope they enjoy their time in Vermont.”

“We welcome the Vice President to our state and hope he enjoys his stay.”

Pence spoke at John McCain’s memorial service yet he and Gov. Scott (R) kept mum about his trip.  Sanders and Leahy weren’t trusted enough to be told that the Veep  and his family would shortly fly into Burlington on Air Force Two; or about the motorcade, secret service detail, etc… That was smart.

He made an unannounced visit to the President Calvin Coolidge Historic Site (LINK).  He ate maple creemees and went went fishing (LINK)!  There has to be more. One reporter said “…it appears the Vice President met briefly with several key Vermont Republicans about the mid-term elections.”(LINK) Is something else brewing?  Maybe but the media doesn’t seem to know much. 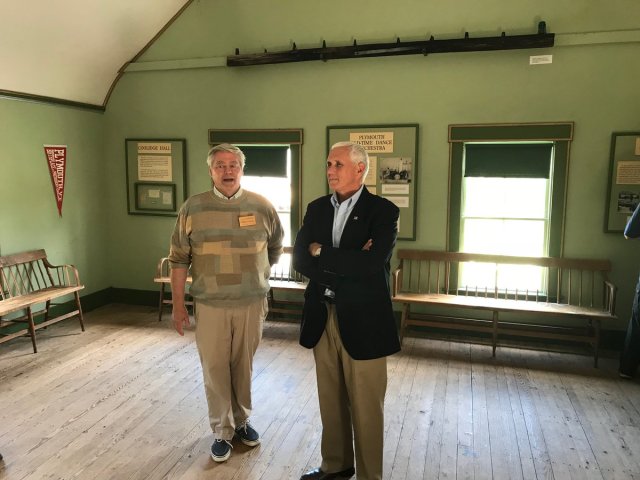 Calvin Coolidge, the only president born on July 4, Independence Day, is a conservative icon these days.  Mike Pence keeps his portrait in his office. The Calvin Coolidge Presidential Foundation (LINK), a private group, which has an office on the homestead property, has experienced a “conservative takeover” (LINK) according to Seven Days newspaper. A lot of money has flowed into the national foundation, IRS records show. 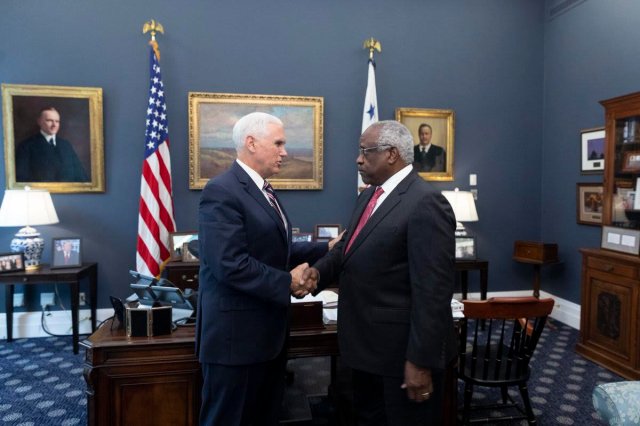 Pundits thought it was unlikely that Bernie Sanders from tiny Vermont could ever be elected president but surprises happen.  The Dems dirty tricks hurt Bernie so the surprise was that the populist vote went to Trump.  If Sander’s hadn’t been damaged by them, he and Trump would have faced off in the debates. The old business man and the old professional politician–both blunt, would have gone at it native New York style.  Talk about good ratings.

Perhaps VP Pence wonders, if, as fate would have it, could he unexpectedly become president like his hero, Calvin?

Image:Library of Congress: Text: VT gov. “While vacationing at his old family home in Plymouth Notch, Vice President Calvin Coolidge received an urgent message from Washington, D.C.: the President, Warren G. Harding, had died. At 2:47 a.m., by the light of a kerosene lamp, Coolidge took the oath of office from his father, the local notary public. Years later, Coolidge wrote, “It seemed a simple and natural thing to do at the time, but I can now realize something of the dramatic force of the event.”

Silent Cal is an interesting character, frugal, war-avoider, a tax-cutter and cozy with Big Business. The Coolidges entertained the oligarchs of their day in Plymouth Notch; below we see Thomas A Edison, Henry Ford, two Firestones.  (He is signing a maple bucket as a gift.)

With the Roaring Twenties still roaring, Coolidge declined office-holding before the stock market crash, Great Depression and the extreme hardships that ensued–which was a good thing.  He was out of touch. For example, although Coolidge had veterans in his family, he didn’t support WWI vets who sought bonus pay.

Congress passed a bonus in 1922 but President Warren Harding vetoed it. After passing another bonus bill, Congress overrode the veto of President Calvin Coolidge in May 1924 and the measure was enacted. The payment—which provided veterans $1.25 per day for service overseas and $1 per day for domestic service—was deferred by the law until 1945.

The issue was reopened in the early 1930s, when cash-strapped veterans suffering the effects of the Great Depression marched on Washington to demand an immediate payment. (LINK) and (LINK).

This is a very bad story of governmental abuse.