HCVAdvocates and other sites have followed the dismal 2015  story of  Dr. Allen Thomashefsky’s medical practice and reopening.  Briefly, as of June 4, 2015, 7 patients were identified with HCV, 5 of whom had received injections on the same day at the doctor’s office. Molecular genetic results confirmed that those patients were infected with the same strain.

The Santa Barbara Dept. of Health didn’t fool around with this outbreak and their report of announced and unannounced visits to the medical office is full of shocking details (LINK). PDF: Inspection Report FINAL 9-28-15. 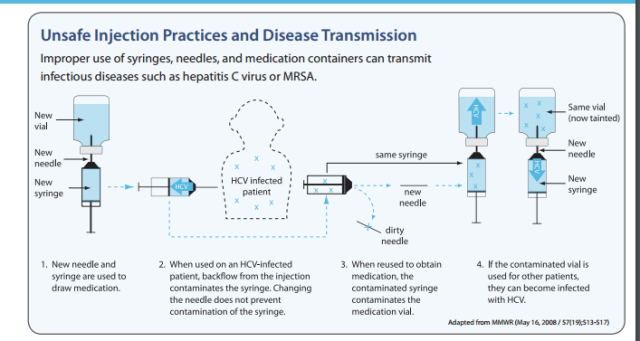 WHAT NOT TO DO!!! Click image .” The One & Only Campaign is a public health campaign, led by the Centers for Disease Control and Prevention (CDC) and the Safe Injection Practices Coalition (SIPC), to raise awareness among patients and healthcare providers about safe injection practices. The Campaign aims to eliminate infections resulting from unsafe injection practices.”

Anyone who has even a slight awareness of “Standard Precautions,” such as the need for hand washing, dirty areas/clean areas,  multi-dose vials, gloves, safe injections, labeling, environmental cleaning, medical device cleaning, single-use IV bags disposal after use once, will be appalled at the discoveries.  Apparently, the doctor administered injections as illustrated in the graphic: he just changed the needles, not the syringes. He told inspectors that changing a syringe was “overkill.”

The receptionist, reported to be his daughter, (LINK) claimed not to be involved with the procedures but inspectors found that she was very involved.  ASKNOD readers may be upset to read, for example, of how she disposed of patients’ blood and fat in the office kitchen’s sink (page 7). Initially she told inspectors that a locked door led to a storage room.  Later, she opened the room to reveal a bedroom with filled trash bins.  This was Dr. Thomashefsky’s living quarters when he wasn’t working at his Ashland, Oregon office. (One wonders where the bare-handed doctor bathed? Sponge baths in the kitchen sink?)

The office was closed on March 19 due to the infection control breaches but allowed to reopen in the fall, according to an article (9/16/15) in a local paper (LINK).

Needless to say, modern “Standard Precautions” were not being used by the military when tens of thousands of veterans became infected with blood-borne pathogens during their military service.  But that they aren’t be used today in all medical practices, is alarming.  In contrast to the Minot Dept. of Health, the Santa Barbara Dept. of Health did a good job at putting patients’ interests first by releasing a revealing and honest report.  And I expect this practice will be monitored closely going forward.