A new look at an old friend. I’ve preached about the VA’s rating system on DM2 many a time. It is constructed in a rambling conjunctive “and”/  disjunctive “or”, progressive manner with each new add-on permitting a rise up the ladder. Nevertheless, it is necessary to have each item in the recipe or the VA says you do not pass Go! and collect 40%.  Mr. Middleton’s dilemma began with some one with a smattering of legal knowledge saying “Insulin? Byetta? What’s the dif? They both do the same thing. Jez, Birdeye, I’d go for it. That’s $661 a month versus $442, dude. We’re talking some serious walking around money here.”

The big jump from 20% to 40% has always been the step on the necktie moment for Vets. Failure to have a doctor insert something that says the Boston Marathon is right out mans you can’t get there from here. 40% is also purely conjunctive. There is no other interpretation. Three things. Not 2.4 things.

Mr. Birdeye L. Middleton attempts to bridge the gap with an “injectible” rather than “oral” hypoglycemic agent- in this case Byetta®- to bypass the “requiring insulin” codicil in 40%. His argument falls on deaf ears which makes this whole appeal to the Dead Circus a horrible waste of his time, our money, and innumerable trees. Nothing of any consequence was decided. DC 7913 is not ambiguous. It is not confusing. It poses no problems for mortal Vets to comprehend. Veterans Service representatives maybe, but not normal folks.

Middleton argues that the court’s interpretation limiting the regulation to require a prescription for a specific medication is inconsistent with the benefits scheme and regulatory history, which focus on the severity of the impairment and how well a veteran’s diabetes is controlled. Moreover, he contends that interpretations of ratings that rely on specific medications rather than impairments become obsolete as new drugs are introduced; therefore, any ambiguity should be resolved in favor of referencing symptoms, e.g., whether insulin is needed for control regardless whether it is directly injected or endogenously created after administering a medication such as Byetta®. The Secretary argues that the plain language of DC 7913 unambiguously recites “[r]equiring insulin,” which should be given its ordinary meaning and does not encompass using an insulin-inducing drug as
analogous to using insulin.

Insulin. No one has a patent on Insulin. It’s a drug manufactured by your body. If you don’t  manufacture  it, you die. DC 7913 says Insulin. It does not say Bristol Myers Brand, Byetta or Bayer. Case closed. I note Barton F. Stichman of NVLSP fame was in on the side of the appellant.  Close but no cigar, Birdeye. I don’t see it. VA is too slippery for that manuvre. 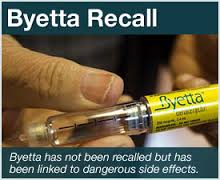