The much-vaunted ‘Take us into 2015 and go paperless” Veterans Benefits Management System crashed and burned under a light load in December. Response time for queries or filing acknowledgement sank to new lows as RVSRs howled in frustration. AFGE shop stewards have thrown down the gauntlet and demanded action. “The brothers and sisters are being crucified for no production on claims and they’re getting flak for being the bottleneck in the backlog” said an unnamed AFGE member in the parking lot of the Portland VARO. “You have to understand the pressure we’re under to solve this”. He continued when pressed “I can put in my query and still go get coffee and some cookies out of the machine in the time it takes to pull down info from another VARO. It’s like dial-up in 1994. You feel like you’re in the twilight zone, you know?”

Member LawBob Squarepants sends us this interesting blast from NEXTGOV that apparently raises eyebrows (and hair) everywhere but VA.

I find it revealing that VA is IT-challenged after all the Billions thrown at this:

VBMS is a Web-based application that accesses files stored on remote servers. It supports other programs in a shared infrastructure “meaning other applications experienced the same issue,” the internal email said. Department officials attempted to alleviate what one VBA official termed “the impact of excessive read write activity” by removing “all non-essential, non-productive activities for the shared VA environment.”

I’m not even going to ask how much money it costs to strip down a brand new Cadillac and prep it for a demolition derby.  Now for the pièce de résistance extraordinaire. I laughed so hard I choked on my coconut.

Last June, Richard Dumancas, deputy director of the American Legion’s Claims, Veterans Affairs and Rehabilitation Commission, warned of latency problems with VBMS when it was deployed to only four regional VBA offices.

He told a hearing of the House Veterans Affairs Committee that the initial experience with VBMS shows some delays in opening files that cumulatively could create significant delays over the course of a workday. “These lag issues are showing up with a relatively small number of users in pilot sites, and when the whole system goes nationwide, system demands will presumably be far greater.”

Ooooooohhhh. Purple highlight for blowing bubbles. Lets see if we can follow this. It’s slow. The more VSRs that use it, the slower it goes. If you hook up even more raters to it, presumably it’ll go even more slowly with degraded performance. They knew it six months ago and sat there in Orlando singing CFR karaoke, sipping wine, sampling cheese and watching ice carving. Oh, and the Gen. Patton lookalike for $50 K. I almost forgot him. Gen. Nero Claudius Caesar Augustus Germanicus fiddled while VBSM burned.

We are living in strange times. VA fears us. Read on.

In 1976, access to VA personnel was phenomenal at Seattle’s Smith Towers. When denied for a VA loan at 25 and single, I marched down with my boss and we sat down with Doug. I didn’t call first.  I just decided to go down there. We went up to the sixth floor and got off at   VARO #346. The secretary went and fetched him. He was the guy who did loans. Pretty simple, huh? We made a grand bargain. If I got married instead of just cohabitating with Cupcake #1, he would approve it. I called him back at his number several months later and he even remembered me. I brought in a copy of the marriage license and we were good to go. And VA thought they could improve on a system like that.

In 1989, you could still walk in to the Seattle VARO (in the new Jackson Federal Bldg.) on the 11th Floor and meander all over the place. The VSO’s were right across the hall. My VSO rep. and I sashayed in there one day in 1990 without so much as a by your leave. It was one big happy family (and still is in my book). VSOs are waaaaaaay too close to VA folks- like people who marry their first cousins. Yeah. disgusting, huh.

In 1994, the commercial counter look became the norm. No more unsupervised trips down the hallway. Incredibly, after this security upgrade, lost records became more prevalent instead of less. This would be like outlawing assault weapons and discovering there were even more than you ever dreamed of after enacting the ban-and no one was turning them in (the guns-or the records for that matter).

On my last trip in 2011, they had moved the desk downstairs to the ground floor on 1st Avenue and hired ex-NFL linebackers for security. You cannot get to the 11th floor. A representative comes down to talk to you. I went up for the Travel Board Hearing and was escorted to and fro by Mr. Clean in a uniform with a .40 Glock. My walker must have struck fear in their hearts.

SLOW? The VA is being slow?   Round up the usual suspects! 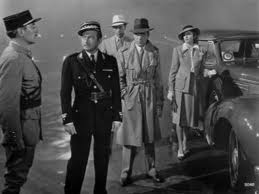