We will deny no Vet before his time

Maple Syrup Frank, in addition to annually sending me about enough of Vermont’s highest octane of elixir to fill a drop tank, also mails me an inordinate number of articles of, or having to do with, the VA. This is fortunate because I barely have time for a heart attack-let alone the intense research needed to find out about all the smoke rings VA is blowing for the lamestream media to perpetuate. Here’s a really good example of propaganda sold under the guise of “change”. I will bold and print in red some of the standard “action words” the Government is fond of bandying about. They are all a red flag to indicate VA has been weighed and found wanting.

First, I acknowledge the source. This is an article by Norman Eisen. If I didn’t know any better, I’d presume he works at the VA PR factory. This is a slick, pro-VA article where seldom is heard  a discouraging word. It could have been authored by the OIG and would read identically. The title of the article speaks of VA reforms in the past tense- as if we can take these to heart and use them to cure all the ills of Government. Were I to ask any Veteran if he could list a significant recent improvement at the VA, I doubt any could say more than ‘Thank God they let attorneys in to help us in 2007.” Even our staunchest allies at the Veterans Service Organizations fought VA tooth and nail to prevent that reform.

From the top. Mr. Eisen references two VA “findings” of import which I link here:

The first article is a bald VA apology for past transgressions but wallpapers over the problem by declaring the object is for us to enjoy this experience on the occasions when we are forced to endure it. The object, in VA’s mind, is to make a decidedly unpleasant experience palatable and even rewarding mentally. It is, at best, a position paper on what the VA would look like in a perfect world. Proctor and Gamble (P&G) never had it this good so why is Secretary Bob attempting to foist this off on a bunch of rube Vets? The principles are magnanimous. The devil is in the details. If you can’t fire the miscreants, what? Retrain them by sending them to Human Resources Management 101 classes?

I love pep talks and boy howdy is this one a daisy. There’s more in here than a Baskin Robbins ice creme parlor. Reform as far as the eye can see. Whooooooooooooo, doggies. Triple scoops for everyone served up in seconds flat. No one goes away disgruntled. We apologize for killing 47,000 of you on delayed waiting lists across the fruited RO plains but bear with us. We are gonna give you an “experience”.  We’re still trying to affix a patch to that pesky 60,000 appeal delay at the Board of Veterans Appeals and should have it ironed out by 2027 but that’s neither here nor there. You’re going to enjoy this experience  so sit back and wait for it to occur. What the hey. You Vets are somewhat of a captive audience anyway.

“These actionable short-term objectives support the VA’s longer term aim to deliver an exceptional experience for our veterans. By aiming high, and also drafting a concrete roadmap, the VA has put itself on a path to success.”

Secretary Bob and Co. obviously think that setting ‘short-term objectives’  and drawing roadmaps equals reform. Problem solved. An exceptional experience that solves nothing is exceptional though. No debating that. Vets always remember their Texas-style necktie parties and regale their Vet buddies at the VFW bar with these memorable experiences. Secretary Bob now ensures we’ll also recall them henceforth as ‘exceptional’. I can’t wait.

2. Hybridize the best of public and private sectors

Item number two continues the snow job. This is the “Boldly Going Nowhere At Lightspeed” technique. It’s a carny ploy to get you into the tent before they bait and switch back to the ‘old’ VA of delay and deny. It  consists of much hot air and promises. The choice of buzzwords is impressive. No less a respected company than the Rand Corporation was drafted for this. Imagine how much that one cost. Remember Rand? They brought you the “Pentagon Papers” which we weren’t supposed to see.

“The Secretary and his colleagues are leveraging the goodwill, resources, and expertise of both the private and public sector.”

This begs the question of where VA has been all these years in innovation.

This gives a whole new meaning to Diana Reuben’s and Kimberly Grave’s adventures in creative employment practices. This some high-grade hashish they’re smoking if they think Veterans’ collective memories are that stunted. With Sharon Helman throwing her hat back into the ring demanding readmittance as well, we have the perfect storm brewing.

” And so that no good idea is left unheard, the VA has created a “shark tank” to capture and enact suggestions and recommendations for improvement from the folks who best understand daily VA operations—VA employees themselves.” 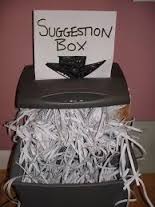 Imagine letting the foxes suggest the protocols for egg production at the henhouse. What a positively bold initiative. Hell, the next thing we know they’ll be putting up suggestion boxes. Every successful housecleaning I’ve ever seen was accomplished via a bloodbath. In the Air Force, my father was mortified when an ORI hit. This was the dreaded Operational Readiness Inspection. No warning was given. A command component was headed up by an officer equal in rank to the commander on scene. He landed with his minions and the chips fell where they fell. If you were caught with your pants down around your knees, chances are you were soon going to command an outhouse in Thule, Greenland and you promotion potential was nil. Contrast that to a VAOIG ORI which would have given it a Casper Milquetoast ‘We were unable to substantiate that only one of the 12 fighters in the squadron were airworthy or operational”.

No self-respecting propaganda flack for the VA would miss the opportunity to hamburger a dozen or so good soundbites and Mr. Eisen gladly complies. Consider these jewels:

“The results that the Secretary and his team have achieved speak for themselves:

Mr. Eisen closes with the icing on his Marie Antoinette cake . Please also read his curriculum vitae at the bottom of his article which will explain much.

“Thanks to Secretary McDonald’s continued commitment to modernization, the VA has made significant progress. Problems, of course, remain at the VA and the Secretary has more work to do to ensure America honors the debt it owes its veterans, but the past two years of reform have moved the Department in the right direction. His strategies are instructive for managers of change everywhere.”

What, pray tell, are the reforms crowed about? VA’s Choice Program augered in for lack of funding to supplement the Denver Colorado Hospital fiasco. VA is begging Congress for more money for artwork in the waiting rooms in Palo Alto. Bonuses (and morale) are down to record lows for VA’s finest. VA’s OIG has been forced literally at gunpoint to release the truth about the appointments scandal that mysteriously to this day could and cannot not be substantiated. They’ve been hoarding them since 2004 and claimed they ‘disremembered’ to publish them or thought it was not very important.

Virtually every Veteran I deal with gets a Fully Developed Denial right out of the box after a submission that is documented six ways to Sunday. The denials all read identically. The Regional Office backlog is a thing of the past only because the denial process has shifted into high gear. Almost all denials studiously avoid delving into a Veteran’s contemporary service medical records to ascertain the facts. Woe to them who have old handwritten medical notes too. VA raters don’t even bother to look at them. If the .PDF isn’t an OCR word-searchable document, you’re toast all the way to the CAVC.

I have noticed that all the reforms discuss inviting many, varied parties to the table to suggest improvements. Among those invited are ‘industry leaders”, Veterans Service Organizations and VA poohbahs. Nowhere in this stakeholders ad hoc discussion group have I heard the words “dissatisfied Veterans with horror stories and suggested remedies”. We do not exist in their universe. We are not stakeholders. We are a “product” to be handled with vinyl gloves and held up for inspection. We are data with a small ‘d’. Much has been said about how the VA is an Industry Leader in studies, data accumulation and data bases. With all this valuable information at their fingertips, why is it so hard to discern a way out of the jungle of stupidity and corruption? How many Veterans have to die before someone says “Gee, how come we’re paying the VISN director a a $21,000 bonus this year when 300 Vets died and schedulars cancelled appointments at a wholesale rate while lying about it on his watch?” Do we need more “data” on this phenomenon? In construction circles, we used to say that it was time to shoot the engineers and begin production. That is à propos  here-now. Today.

To say that VA “gets it” is ludicrous. They merely have decided to say they get it on paper and promise the same litany of mea culpas that provoked the VJRA of 1988. Again note the tense of the title. Mr. Eisen implies this is a post -game wrap and VA has solved its problems and we can apply this recipe government-wide.

VA has taken a battering in the court of public opinion. The only way to combat this and turn the tide is to not to spew out a veritable avalanche of promised reforms to remedy it. Let’s have a good old-fashioned ORI at our 57 Puzzle Palaces. Let the bloodbath begin. Actions speak louder than words unless, of course, you’re the VA.