Experiments: HCV can live in water bottles for up to three weeks

“We found that, depending on the viral dose, HCV can survive in water for >3 weeks and might thereby contribute to ongoing transmission of HCV in PWID networks when water is reused or shared. These results are in line with data showing the stability of the virus in serum for 3–4 weeks”  (LINK to footnoted study/doi: 10.1086/652803)

“The can had probably the highest association with HCV among the evaluated water containers because more of the original HCV-inoculated water remained in the can before it was refilled, owing to the can’s small opening.” Image: viZZZual on Flickr

IDUers help HCV move on to new victims when they prepare their drug works. It clings to plastic, aluminium cans (Red Bull), but not so much, glass (Coca-Cola). It gets on everything; no blood (serum) is needed for it to remain stable and infectious.

It is technical so here is a part of the introductory summary (edited):

We investigated the risk of HCV transmission by analyzing the direct association of HCV with filters, water to dilute drugs, and water containers.

Experiments were designed to replicate practices by people who inject drugs and include routinely used injection equipment. HCV stability in water was assessed by inoculation of bottled water with HCV. Viral association with containers was investigated by filling the containers with water, inoculating the water with HCV, emptying the water, and refilling the container with fresh water. Transmission risk associated with drug preparation filters was determined after drawing virus through a filter and incubating the filter to release infectious particles.

In short, it takes a lot of effort to render HCV that “exists” outside of a human body harmless.  It survives high heat, all manner of chemicals, freeze-drying, being left on a wide variety of surfaces and neglected for weeks in the open air.  HCV doesn’t need blood to “live” in hostile environments but it eventually will fizzle out if it can’t hitch a ride into a new human body. In water, blood, powder, it’s all good as far as HCV is concerned.

HCV is not picky about its habitat outside of human bodies while waiting to slip into a new one. And it is patient and can handle extreme environments.

So is it really accurate to think of HCV as a limited blood-borne pathogen when even liquids like drinking water can be an intermediary step between carrier A to carrier B?  It makes the VA’s approved “HCV risk factor” lists,  C & P exams (most) and BVA HCV denial decisions even more ludicrous in the light of all the new information that is being published.  Referencing this study may be useful in the HCV claims process. 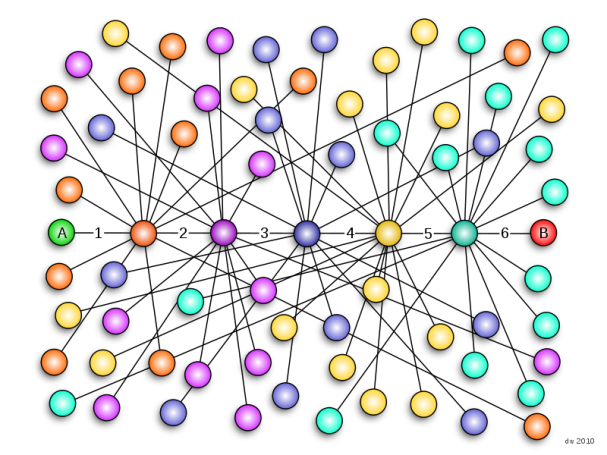 “Six degrees of separation” by Daniel’ (User:Dannie-walker) – Own work. Licensed under CC BY-SA 3.0 via Commons –

The degree of separation (think Kevin Bacon Six Degrees of Separation (BBC video) between any veterans harboring HCV while in-service and those who were not, was very slim. Consider contaminated possessions and it’s slimmer still.  (I suppose learning a bit about network theories should be on our agendas.)