They say some things just jump up and bite you on the butt -mentally, I mean. As I mentioned several weeks ago on a Hadit.com podcast, arguing with VA is a technique. VA is about as vague as a New England fog. And for goodness’ sake, make sure you’re arguing the right thing with them. As I’ve mentioned before, nothing gives you that sinking feeling in the gut when you discover VA has been alluding to your Hepatitis C claim and not your hepatitis B claim… or worse, your “infectious” Hepatitis A claim. Aaaaarhuuuuuuuu??? Hep A???

Malcolm spent an eternity trying to get VA just to acknowledge he still had active hepatitis of any kind 10 years after he got out. He filed and lost right out of the gate (but only for Hep B) which we’ll discuss below. He refiled and finally won- 0% in 2004 as he should have received in 1991-but for Hep C- not the Hep B in 1991. Another five years netted him a “sorta” win at the Fed. Circus and a new Texas Necktie Party. He got 10% for four years and then back to zilch. Those remands can come around full tilt and bite you in the ass too- and it isn’t exactly a mental feeling either when that happens.

After sifting through every last thing in Malcolm’s file, I began to examine the semantics of his CUE denial from the 1991 rating decision to the end (last week) of the third CUE claim denial. VA would still like to cling to the fig leaf of characterizing Malcolm’s bout with viral Hepatitis B as “acute” and/or “infectious hepatitis”-another name for Hepatitis A. Check out his latest denial. Houston, you have a problem. 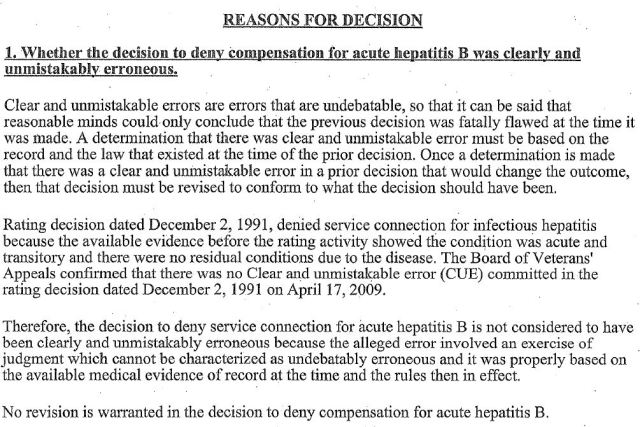 As we all know in 38 CFR §3.303(a) as well as §3.1, the clear requirement for S/C for any disease or injury is that it simply must occur on active duty and you weren’t bungee jumping off bridges without a permit. Bungee jumping is covered by  §3.301 under willful misconduct.

So, assuming you incurred hepatitis, sinusitis, a broken left pinkie and a scratched eyeball in service, all of which were deemed in the Line of Duty and well-documented in the STRs, which of these would you ever guess would be denied by VA?

b)all but the eyeball

e) none of the above

The pencil puke at the end is a post hoc CYA. The rater forgot to consider the application of §3.324:

Whenever a veteran is suffering from two or more separate permanent service-connected disabilities of such character as clearly to interfere with normal employability, even though none of the disabilities may be of compensable degree under the 1945 Schedule for Rating Disabilities the rating agency is authorized to apply a 10-percent rating, but not in combination with any other rating.

I’d love to meet this ratings board. In one paragraph, they deny hep for no residuals and then grant 0% SC for the pinkie …because there are no residuals.  Is that a speshull kind of dumb or do they teach that at VA Raters School? Can the M 21 be that discombobulated as to generate  two entirely diametrically opposed interpretations of law in one paragraph? Put on your helmets and take your protein pill, folks. Welcome to  38 CFR mysogination world. If the ultimate goal is denial of a claim, anything is fair game. I’ve seen this trick  frequently and it amazes me more of you don’t file a CUE and go after them on it. You will need a decision that explicitly describes why they denied for the “gottcha” which generally rules out the older ratings decisions before 1990.

Most of you remember Walker v. Shinseki (2013) where the OGC krewe finally decyphered the meaning of what they wrote in 1962 (38 CFR 38 CFR §3.303(b). God, that must have been embarrassing as hell to get to the Fed Circus and have them tell you it only applies to chronic problems on the 38 CFR §3.309 list. Fifty one years of brain fart.

And that’s what I found here on Malcolm. VA granted the left pinkie and the eyeball scratch -at zero percent of course-  under the auspices of  38 CFR §3.303(a) but turned around and denied the hep and the sinusitis under 38 CFR §3.303(b) because they weren’t chronic and compensably rateable at 10% or more. That’s a CUE of a different color and one that sticks out like a flat tire on old Mr. Pharaoh’s chariot. You can’t get away with granting two claims based on their incurrance in service and then deny the other two because they happened in service but were healed and asymptomatic at discharge and not rateable at 10% or more. Well, maybe you could get away with it in Tennessee or Kentucky if a fellow had one too many of them Oxycontin lolipops-but as a general rule, no you can’t.

So, how many of you have old, unappealed ratings denials that exhibit this ass-backwards approach to claims adjudication? Oddly enough, I got whacked with the exact same phrase for my back injury in 89- just two years earlier. It was acute and resolved before discharge.

Proving CUE is about like riding a tricycle in this instance. But wait for the punchline on this one. Malcolm must have Deja vu disease or God is watching over this boy. When he actually got to the BVA with his CUE for an earlier effective date and a CUE on the 1991 decision, he was conned into dropping any claims for Hepatitis B and focusing strictly on Hepatitis C to the exclusion of all other flavors of hepatitis. I guess that would confer the semantic “infectious” on Hep C too now.

What you are seeing now is CUE compounding itself with more CUE. VA is so confused, they’re making errors as to what disease was subsumed in a prior BVA decision.

HOW MANY TIMES CAN I FILE CUE?

Legally, we can file any number of Motions to Revise (a CUE filing) and get a decision. Each succeeding theory has to be different from the last to be entertained by VA though. However, if you take one of these CUE claims to appeal and are denied at the BVA, that’s the end of that CUE claim theory-forever and ever. While the VLJ (Keith Allen) might have denied an EED in 2009 and declared no CUE error in the 1991 decision, it only applied to Hepatitis C because Malcolm had unwittingly chosen to withdraw any 1991 CUE claim theory for Hepatitis B several months prior to his BVA decision. Malcolm ought to seriously consider buying Lotto tickets with that kind of prescience.

Confused yet? Don’t be. Malcolm will win the 1991 CUE claim-probably in a panel at the CAVC. VA is already trotting out the mention that the HEP B claim was subsumed forever in 2009 by the BVA decision. I guess they should have read page two (above). In the Conclusions of Law on page three, VLJ Allen was very circumspect about which “hepatitis”  he characterized as “hepatitis”. This preserved Malcolm’s right to request a new Motion for Revision at some future date… like this year. It’s almost eerie how Allen was anally precise in putting a corral around 1991 with respect to Hep C  only and leaving Hep B  for another day.  Jez, you don’t suppose he did it on purpose, do you?

Can you see why VA law is so much fun now? You get to make VLJs,  VA raters and DROs look like complete boobs. Of course, you can’t be obnoxious and drag their noses through it. Think of it like Fox News… We Report. You Decide.™ If the VA “examiner” is dense, he won’t get it. It took me a few passes for a good BDA before the §3.303(a) and (b) dichotomy sank in. I’m hoping Malcolm’s DRO review Coach will finally “get” it. Just in case, I drew a really good stick map in the dirt for them.

Now, I guess we have to assess whether this was purposeful or an unfortunate ratings mishap. And that’s all I’m gonna say about that. Happy CUEs to you until we meet again.