HOUSTON, WE HAVE A PROBLEM…

FROM THE SAM HOUSTON 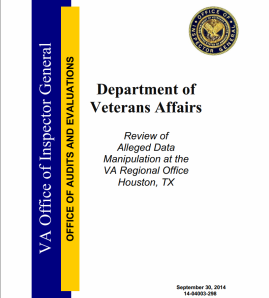 In a change of pace, the Houston Veterans Service Center Manager (VSM) called the VAOIG and begged them to come on down to sunny Texas to arrange a necktie party for one of their own. Seems a former mailman turned VA rater was “stashing claims” in the “already done” file and cooking the books to make  the number of completed claims look marvelous. But wait. I thought that was how they always did it. Seems I was wrong. Well, partly. He was getting out of hand with a good thing. When you “finish” 31 out of 50 claims in a day, your bonus check is going to be stupendous. Just make sure you stamped denied  on them and not “to be continued.”

This almost sounds like one of those VA Medical Scheduling bait and switches. I wonder how many Vets died while waiting for a decision that was just never going to happen? Now RO Houston has a “pause” button. That’s what the OIG discovered. Anytime you, a lowly untermenschen GS -11, can go into VACOLS and start overwriting Windows with his very own version of “once upon a time” every Vet’s claim is endangered.

One wonders what is next.

3 Responses to HOUSTON, WE HAVE A PROBLEM…